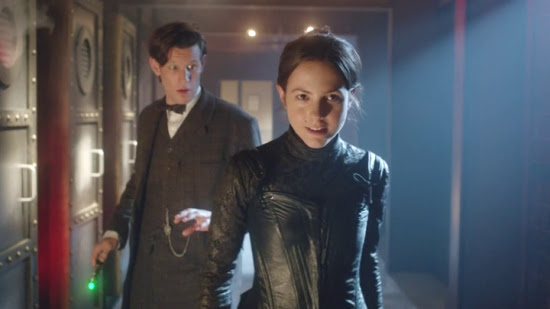 Happy Star Wars Day, everyone. Let's talk about Doctor Who.

Once again, in to-day's episode a Mark Gatiss script struggles to be a Steven Moffat script but always remains a step behind. Instead of the sort of acrobatic comedy of Strax with the memory slug and the carriage in "The Snowmen", we get a few tired call backs to how Strax is a warrior and always references battle.

Strax can be funny, as demonstrated in "The Snowmen", but even so I resent him for horning in on the Vastra and Jenny party. Since we're not getting a Vastra and Jenny spin-off, our time with them is precious, and it's annoying when their scenes are wasted as they try to explain to Strax again that Jenny is not a boy. Ha ha, he's thick, we get it. Could we please just have some dialogue between Vastra and Jenny now? 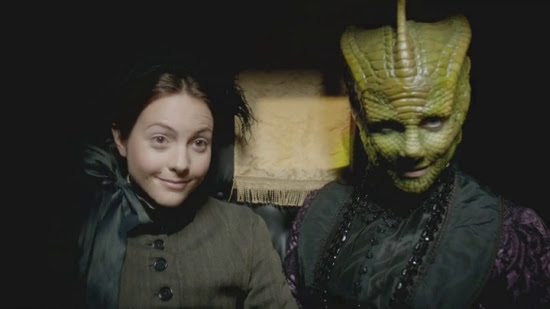 It was nice how much of the episode was told from Jenny's POV as she investigates Diana Rigg's evil health retreat. Catrin Stewart, who plays Jenny, gets a little more time to shine which is very good because in the brief moments we've had with her she's been beautiful with a striking, subtly carnal, idiosyncratic and self-assured charm. It's nice seeing her carrying a lot more, it's only a shame there was no time for developing the chemistry between her and Vastra. 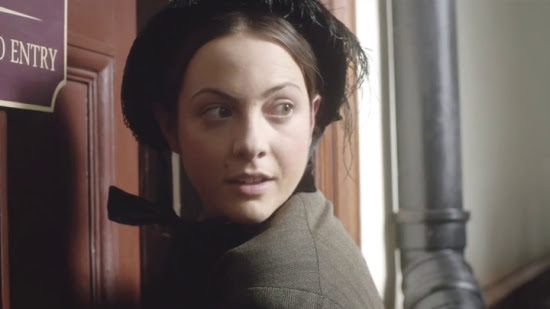 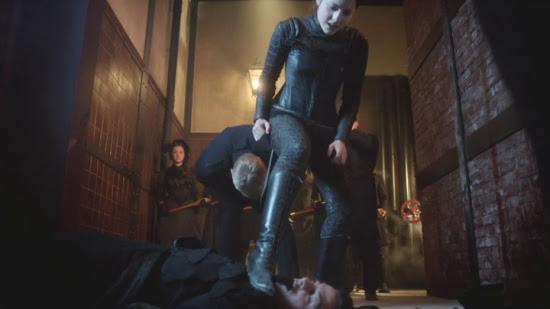 I certainly wouldn't mind her foot gently placed on my chest like so.

Of course, it would also have been nice to have some creative science behind the nature of the Crimson Horror itself. I'd have been interested to see where Robert Holmes or one of the other classic series writers would have taken the concept. And some better dialogue would have been appreciated. I was impressed by the stupidity of this exchange;

DOCTOR: I have a sonic screwdriver!

CLARA: I have a chair!

It's just sort of exquisitely stupid. Often times, a Gatiss script feels like the characters' brains are yoked to a plough being pulled through difficult ground. The Doctor really ought to have been able to put together that there was an easier way of smashing the machine. In any case, stopping to talk about it is lame. In the immortal words of Tuco Ramirez, "If you're going to shoot, shoot, don't talk."

And of course, I can't express with the written word the depths of disappointment in my groan that escaped me when the end of the episode revealed there are going to be a couple of kids on the TARDIS now. But the next episode's written by Neil Gaiman, so maybe it won't be so bad. I have faith in him.

People are already talking about how Matt Smith looks like he's getting the Locutus treatment in the trailer; 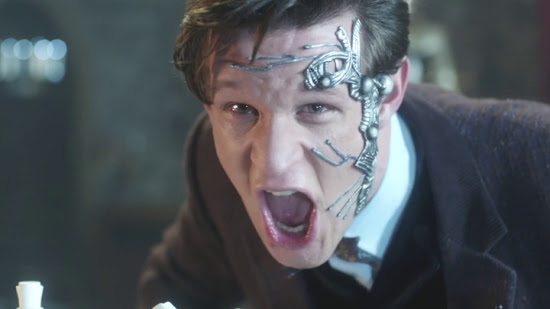 First of all, Star Trek ripped off the borg from the Cybermen. Second of all, we can't necessarily blame Gaiman for this any more than we can blame Gatiss for the unimaginative design of the Ice Warrior in "Cold War". On the other hand, it may be a knowing reference to Star Trek: The Next Generation. Let's just watch the episode and find out, shall we?