A Crate of Unruly Details

Last night I dreamt I was visiting Caitlin and Spooky. They lived in a vast underground compound in my dream. It was dimly lit with various crates and cabinets filled with papers and scientific equipment. Caitlin went to take a bath in a room adjoining one where she kept two cadavers, an old man and a woman. While she was away, I for some reason felt I ought to move a large set of black metal shelves on wheels to another part of the compound. As I was doing so, I released it for a moment when I was distracted by something and it rolled back into a rack of little plants in small clay pots, most of which instantly shattered. Caitlin had been conducting some kind of long term experiment with the plants and she was very upset when she came back from her bath.

I haven't had a busy day to-day so much as a cluttered one. Every time I start to do one thing I need to do another. Too many things have been cropping up for days I'd talk about here if they weren't all very boring.

With lunch to-day I watched the first episode of the fifth season of Clone Wars having finished season four last night. The last four episodes of that season were written by Katie Lucas, daughter of George, and picked up from where a third season arc had ended, the story about Asajj Ventress' homeworld of witches and Zabrak men, which also turns out to be Darth Maul's home world. Katie must have a slightly rebellious streak because most of this arc features Ventress as the heroine. They're not bad episodes, either, the fourth season segment featuring Dooku and Grievous slaughtering Ventress' sisters and Ventress afterwards fleeing to Tatooine and becoming a bounty hunter.

The visual design of Ventress' planet and people, "Night Sisters", was pretty great and the story of bitter Ventress, betrayed by Dooku and then permanently separated from her people, is pretty good, too. 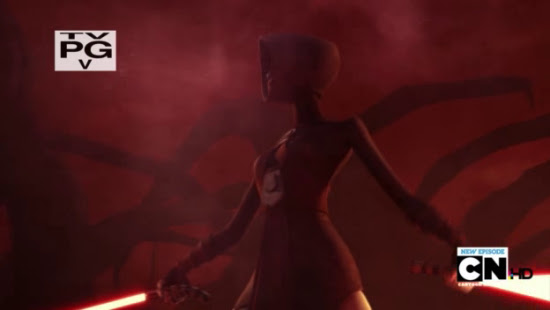 Posted by Setsuled at 7:06 PM
Email ThisBlogThis!Share to TwitterShare to FacebookShare to Pinterest