Seems We Have a Bit of a Naval Battle 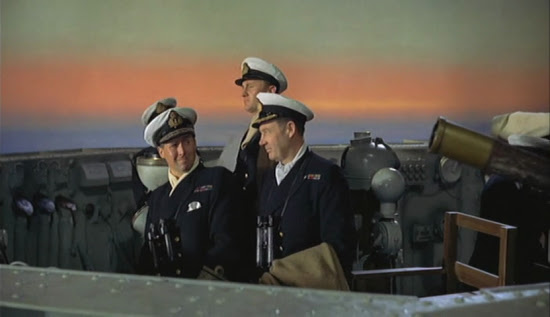 Perhaps an unconditional appreciation of humanity is a little obnoxious sometimes. I was a little frustrated by the first fifteen or so minutes of 1956's The Battle of the River Plate and its depiction of British naval officers caught by Nazis and both parties treating each other in a relatively casual and friendly manner. This is a movie by the legendary writer/director duo of Michael Powell and Emeric Pressburger and it's helpful to have seen their Life and Death of Colonel Blimp which more satisfyingly explores their viewpoint on human nature and resistance to portraying even Nazis as two dimensional monsters. The Battle of the River Plate partly comes across as simply an innocent old war movie where the stakes in battle are vaguely more serious than in football. And yet, it also features amazing realism and attention to detail and there is at least one very intriguing character. 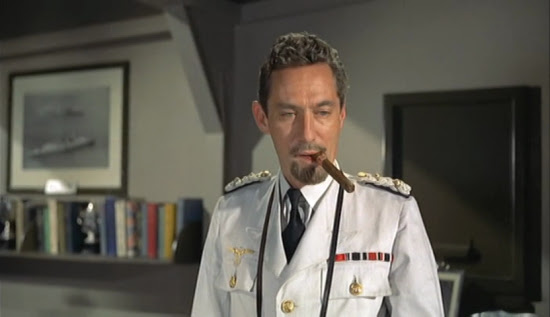 Peter Finch plays Captain Hans Langsdorff of the Admiral Graf Spree, a heavy cruiser of a sort which, as we hear in the film, the British referred to as a "pocket battleship" for its extraordinary, treaty defying armament. As the movie opens, Captain Langsdorff is meeting with the British captain of the ship his had just sunk. The British captain complains about the fact that his ship ought not to have been engaged due to it being in Portuguese waters in the manner of a man disputing a parking ticket. It's a little difficult to believe anything as violent as the sinking of a ship and the deaths of scores of men had just taken place. 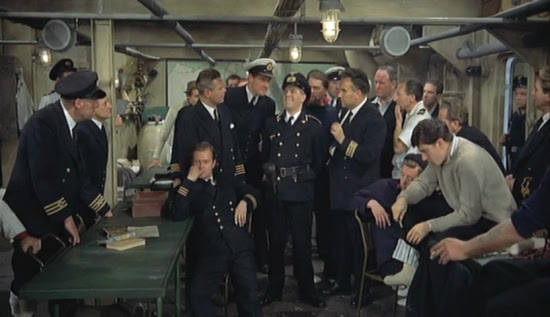 This friendly portrayal is perhaps reflective of British culture. It's interesting to note that the U.S. Navy would not allow the Nazi flag to be flown on the U.S. ship used to portray the Graf Spree in the film so a British ship was used when the Nazi flag was flown.

Other than the American ship used for the Graf Spree, a remarkable aspect of the film is its use of authentic ships in copious amounts of footage. Only when ships are shown being sunk do we see models. 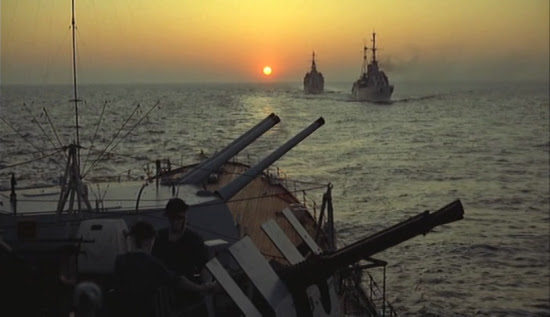 And Powell and Pressburger get some really beautiful shots of these ships, too. Two of the British ships were in fact the very ships that took part in the real battle portrayed in film, which was a 1939 engagement between three British ships and the Graf Spree. 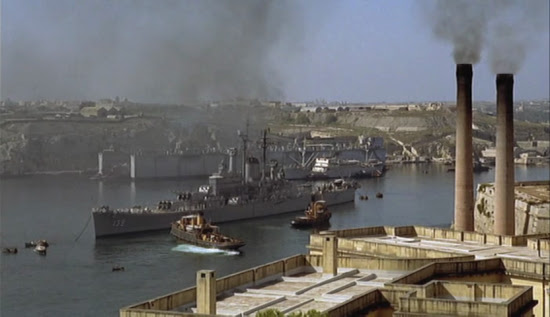 The damage done to the British ships does begin to show something like the violent effects of actual warfare as young men have their limbs blown off and officers suddenly find themselves surrounded by dead and mutilated men. The captured British aboard the Graf Spree serve as a storytelling device in that we remain with the British POV throughout the battle--Powell and Pressburger never used subtitles or had English dialogue stand in for German in their films. So all the damage we ever see inflicted on the Graf Spree during the battle is the shaking of the prisoner quarters and their roof caving in.

The British chase the Graf Spree into a harbour in neutral Uruguay where the film becomes a story of political manoeuvring. A young Christopher Lee has a tiny role as a bartender. 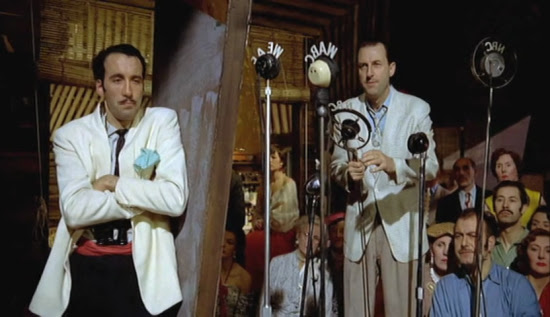 Anthony Quayle does a fine job as the commodore heading the British ships but as I said the really interesting character is Peter Finch's, though he's only in the film for a few scenes. His final moments are subtle and restrained and there's a nice reference to Wagner that reminds one of some of Powell and Pressburger's better films.