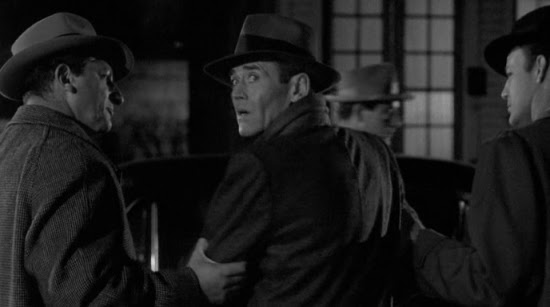 Spending the night in jail can be a horrible experience. Known for making movies about murder and bizarre forms of extortion, Alfred Hitchcock made his 1956 film The Wrong Man about something very simple, something most films might pass over quickly as one of many plot points: a man being arrested for robberies he didn't commit. Based on a true story, Hitchcock creates an extraordinary portrait of human experience. He achieves this most significantly with two devices: point of view and photographic realism.

Hitchcock hated location shots, preferring the studio environment in which he could control everything. Perhaps it was out of respect for the real events that formed the subject of this film that The Wrong Man features so many real places and settings. In any case, however much he hated them, Hitchcock was clearly very good at location shots. 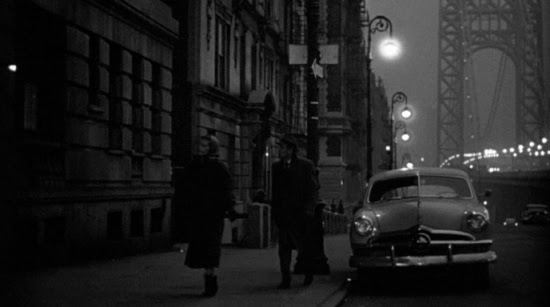 Henry Fonda plays Christopher Balestrero, portrayed as a man whose modes of living are exceptionally clean nosed--he doesn't even drink. He's a musician, playing bass at the Stork Club, a real club in New York and scenes in the club were filmed in the real club. 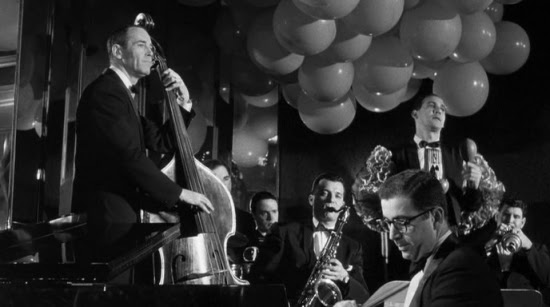 Fonda was a great actor and he delivers a fine, common fellow performance, but one could say Hitchcock's camera creates Balestrero's character more than Fonda does. Hitchcock had long believed in the importance of connecting footage to character point of view--it's abundantly clear in Notorious. Here, it combines with the grittiness of real prison locations to help convey the panic and humiliation suffocating Christopher. As he's loaded into a paddy wagon with other prisoners, the movie cuts from Fonda's eyes looking down to a shot of the legs of a man in front of him. Inside the paddy wagon, we see Fonda looking down again before we see the shoes of the prisoners around him. We see Fonda look up and then see a shot of the small window across from him between two fellow prisoners. 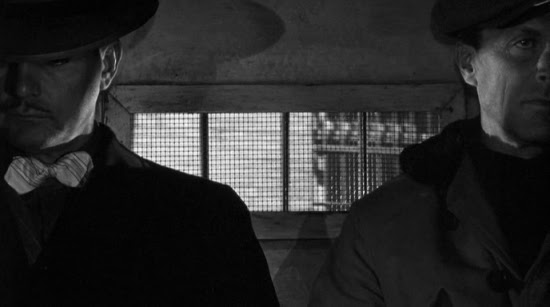 For the most part, the camera stays inside with Fonda. When the camera goes outside to establish the paddy wagon pulling up to its destination it's an extreme high angle shot, rather distinctive of Hitchcock, as usual implying to the viewer how small the protagonist is in the scheme of things, how at the mercy he is to more powerful forces. Vera Miles is in the film as Rose, Christopher's wife. Hitchcock is said to have stuck very close to the facts of the real life wrongful arrest and trial of Christopher Balestrero but one can perhaps see a commentary from Hitchcock in how he chose to portray Rose's story.

Christopher's salvation comes when the real robber is apprehended, an event shown juxtaposed with Christopher praying to an image of Christ for help. However, the film follows this with a scene of Rose in a sanatorium, unmoved by the clearing of her husband's name. 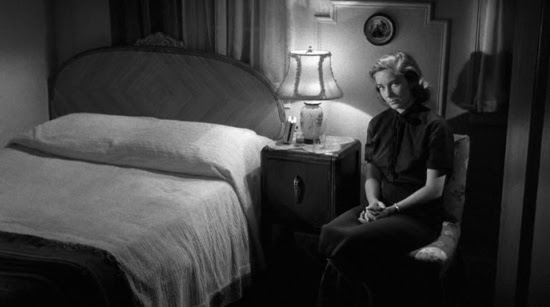 As the two of them had been seeking witnesses to testify as to Christopher's location when the crimes were committed, and twice found a potential witness had died, we saw Rose seem to become more fragile.

At one point she blames herself because it was when Christopher went into the bank to get a loan to pay for her dental surgery that he was first misidentified as the robber. Then, when they're talking to their lawyer played by Anthony Quayle, we see her disconnecting entirely. 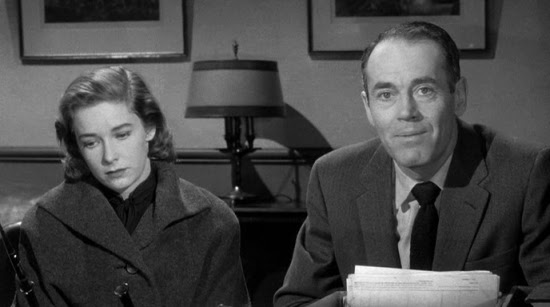 Hitchcock has a psychiatrist show up to explain the typical of Hitchcock questionable psychiatric diagnosis of Rose--it's a lot of dialogue that simply boils down to, "She's unhappy." But it's clear and very effective anyway to see what's happened to Rose--she's lost faith. Neither God nor the virtuous government are in evidence for her. The horror of the experience goes beyond anything that can be made better by Christopher's name being cleared. When she fails to recover in that scene, Christopher admits he guessed he'd been expecting "a miracle." Even though a title card informs us that Rose eventually recovered years later, the scene stands in significant contrast to the one where we see Christopher's prayer apparently being answered. One can perhaps see a trajectory in Hitchcock's view of religion when considering the disaster brought on by a nun in his subsequent film, Vertigo. 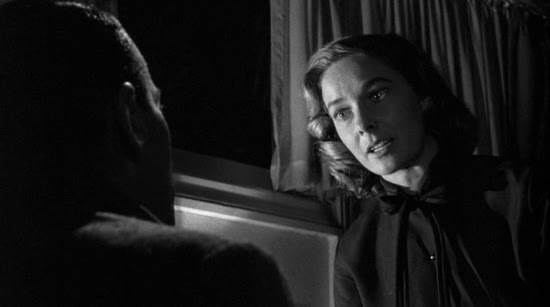 In light of that, it's interesting to contemplate the fact that Vera Miles was Hitchcock's first choice to play the character of Judy Barton in Vertigo. I've watched Vertigo so many times and am so in love with it I may not have the perspective to really evaluate whether or not Miles would have been better in the role that ultimately was given to Kim Novak. But as it is, I think Novak had more of a necessary ethereal quality. Miles may have been better suited to the Barbara Bel Geddes role, though I certainly wouldn't want to swap out Bel Geddes. Miles was too down to earth for Judy, which I guess is why she worked perfectly fine as pragmatic prairie lasses in John Ford movies.