The Repeated Mirage of Home

Most anime nowadays objectifies women, though honestly the male characters don't fair much better. Everyone's a vegetable, really, it's just some vegetables have boobs.

I'm starting work on a new comic and I remembered how much I liked an anime series to watch in the mornings to get me motivated. Even the ironically peppy series seemed to confer on me enough inflated self-confidence to last at least until lunch. But anime has, for the most part, been gruellingly homogenous for the past three years. But I keep trying.

For this morning's motivating dose, I downloaded a new series more or less at random from Tokyo Toshokan, the first episode of Photo Kano (フォトカノ), which I later learned is, like many shows, based on a dating simulator video game. 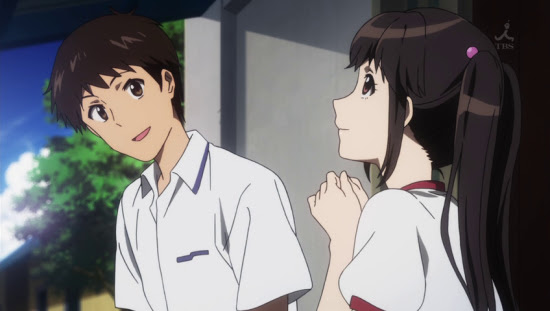 This may be why the male protagonist is utterly devoid of personality and encounters several female and a few male characters with superficial personality types reminiscent of old anime character types in the way a red Skittle resembles a strawberry. But that wouldn't explain why so many other series fit this bill.

The show is about a teenage boy who receives a camera from his father and suddenly finds every cute girl in school wants him to take her picture in a series of one on one chance encounters throughout the day. 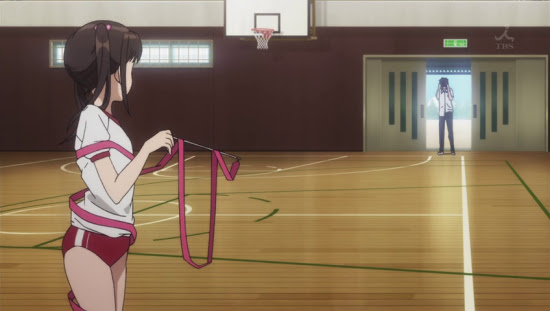 To those who interpret the heterocentric term "male gaze" to mean media that depicts women in a way that caters to people attracted to women's bodies this setup may be nicely meta. To the repressed, passive aggressive type who usually uses the term "male gaze" and uses it to mean that men enjoying the sight of women in media is a poisonous thing inextricably linked to patriarchy, you'd probably feel this show proves your point, despite the utterly useless protagonist who floats from one scene to the next like an anxious paper bag. 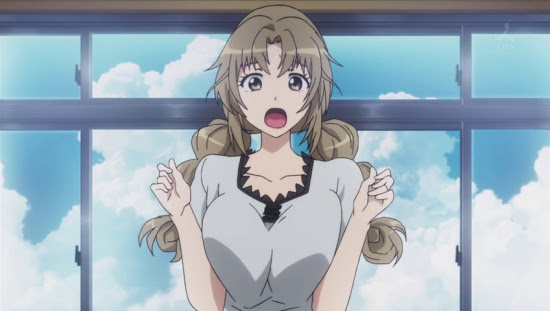 There's no doubt this is a shonen series, aimed at boys and young men, but the only social order it really affirms is the one that keeps everyone alone in their bedrooms.

The protagonist encounters the lecherous head of a school photography club who seeks to enlist the young man into his group dedicated to taking voyeuristic photos of girls. The guy's portrayed as repulsive for actively pursuing what the protagonist and viewer passively enjoy. He's a familiar comedy type, usually a supporting character, though memorably a lead in Urusei Yatsura. But all the humour, like everything else, is delivered at an awkward, methodical pace that absolutely obliterates it.

So I didn't get any fix from Photo Kano. I had been rewatching the "Mayoi Snail" arc from the first Bakemonogatari (化物語) series so I put in the second episode and almost got a nosebleed from the drastic change of quality after Photo Kano. 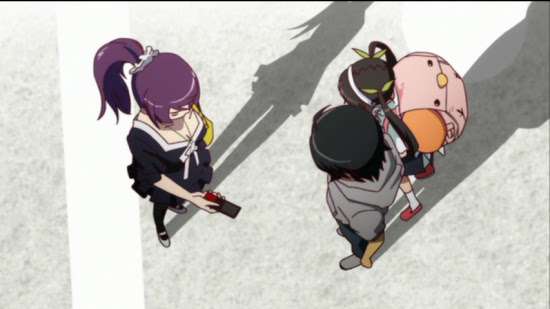 There's less fan service, true, less upskirt shots and the like, but the important thing is it has substance and character. I love the story of the snail demon that eternally can never reach home. Even the ultra peppy theme song is intriguing. One can sense something slightly off about it maybe even before one realises that all the characters depicted are Hachikuji. I especially like the part where she's singing about the one being there to guide her home and we see that it's another copy of herself--we see one greeting two others from across the street like they're old friends, groups of Hachikujis laughing and supporting Hachikuji when she falls in gym class. The song is ironically peppy, speaking to the despair inherent in such dedicated optimism, but it's more specific than that. The scenes depicted are celebrations of community and friendship by someone who is always really alone. The choice of a snail as an animal to represent someone cursed never to reach home is an interesting idea, too. Since the snail's home is on her back, one can see it as both a burden and as something all her efforts would cause her to walk away from.