The Flower of Colombia 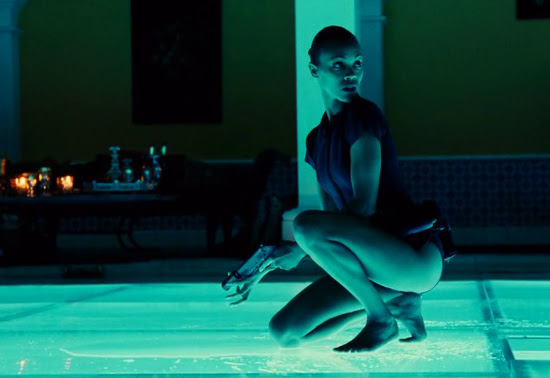 I would argue 2011's Colombiana is not as bad as people say it is. It's true, for every five minutes of the film something stupid happens, the first twenty minutes of the film are devoid of decent actors, most of the film is shot through urine-scope yellow (I think it was 2000's Traffic that taught filmmakers everything south of the Mexican border is yellow), the direction is at best mechanically academic, and the star of this action film is completely unconvincing in a fist fight. On the other hand, that star is Zoe Saldana, she gives a great performance and she's gorgeous.

The petite actress spends a lot of time crawling through ventilation ducts at which she's exceptionally more believably effective than she is in fist fights, not to mention sexy.

Most of the time, too, she's barefoot and in her underwear, a notable exception being a scene where she wears nothing but a black body-stocking.

This is part of a Trojan Horse plan she has for assassinating a guy the FBI are holding in jail over night. She poses as a drunk party girl, gets herself arrested by ramming into a police car, gets up in the middle of the night in her cell, strips and changes to the body stocking she had concealed, and uses an improbable technique with a glass of water and a spoon to disable the fans in the ventilation system for her to crawl through.

The moment she started taking off her stockings I thought of a friend of mine who several years ago was arrested for driving under the influence. She was a lot less intoxicated than Saldana's character appeared to be but they forced her to remove her stockings. Of course, this is less of a glaring problem than the fact that Saldana's able to do this undetected because none of the security cameras are aimed at the cells. When she uses a bobby pin to pick her lock--something else you can be sure would have been confiscated in a real situation--she turns the camera, which was I guess monitoring just the corridor outside the cells, to face the wall. 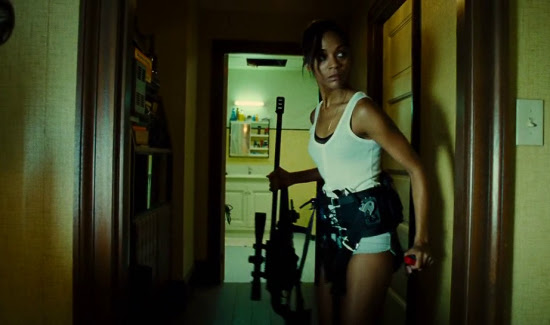 I think there could be an Uncanny Valley in stylised action flicks. I can accept that airliners have holsters for swords in Kill Bill but I don't buy the police procedure in Colombiana. Perhaps it's because for the most part the production is more mundane than something like Kill Bill, or maybe it's because too much of the fudging is to make things easier for the assassin we're supposed to be very impressed by.

But this stuff wasn't so bad that I didn't enjoy the film at all. There's a good scene where Saldana infiltrates the mansion of a crime boss by swimming through his shark tank, and there's some enticing exploration of Saldana's assassin with the buried heart, something Saldana does more to effectively create than the writers and director.