It's 97° Fahrenheit outside and 90° inside. It was 81° throughout the night all because of the five or six R2D2 sized noisy machines in the kitchen aimed at the ceiling in an effort to dry the stucco and insulation and what-not before it's to be demolished. Sleeping and drawing in this is difficult. This is Stray Dog weather.

Drew Z. Greenberg wrote a second season episode of Clone Wars, "Lightsaber Lost", in tribute to Stray Dog. It's a shame the writing in the fifth season, which I finished a couple nights ago, wasn't of the same calibre. 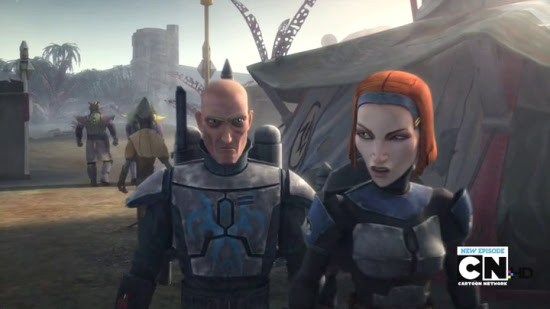 I kind of liked the penultimate arc which featured a group of Mandalorian terrorists, led by characters voiced by Jon Favreau and Katee Sackhoff, teaming up with Darth Maul. It was cool watching them get all the galaxy's criminal organisations under their thumb in order to take over Mandalore and it was equally delightful watching them fighting each other before Darth Sidious showed up to finish them off.

The final serial of the season, though, had writing so bad I assumed the credited writer, Charles Murray, was a pseudonym for George Lucas. But this Murray does have an imbd page. Tim, who watched a featurette on the arc, told me they'd hired Murray because he was seen as a specialist in crime drama, which I guess refers to the one episode of Criminal Minds he wrote. It's perhaps debatable what makes a writer a specialist in the crime genre but I think one of the requisites would probably the ability to craft plots that aren't so obtrusively stupid that they thoroughly sabotage the story.

Charles Murray's arc, about Ahsoka being framed for a terrorist bombing of the Jedi Temple, depends on;

1. Ahsoka suddenly being best friends with Barriss Offee who hasn't been on the show since season 2.

2. Ahsoka being charged with murder for apparently killing in prison the terrorist she herself apprehended.

3. Ahsoka trusting Offee more than Anakin, her master and the guy she's with in 90% of all episodes in which she appears.

5. Tarkin, of all people, zealously intent on putting a commander to death for killing a terrorist during interrogation.

6. A terrorist who attacked the Jedi temple for ideological purposes not taking credit for the attack.

7. Anakin, who believes in a strong military and unforgiving tactics, just letting Asajj Ventress go for no apparent reason.

And that's just scratching the surface. The models and animation are really good, the action sequences were nice, and I did feel something at the end during a fragile conversation between Anakin and Ahsoka, but I think it was mainly because of their history in better written episodes. It helped that they had very little dialogue in the moment because certainly whenever they opened their mouths in this episode they didn't have much to say reflective of their established personalities.