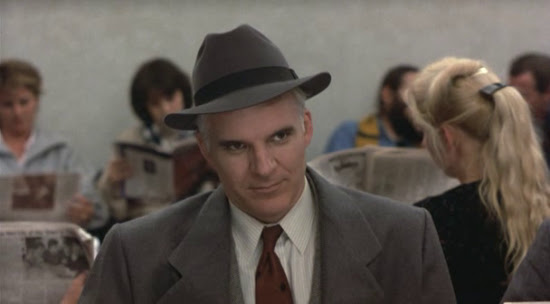 I'm continually amazed by the tendency humans have to blame their own rotten moods on other people. I think this is ultimately the point of John Hughes' 1987 film Planes, Trains and Automobiles. As a comedy, the film is somewhat weakly written though its stars, Steve Martin and John Candy--Candy in particular--make some of it work anyway. But it's the insight into human behaviour that really makes this film worth watching.

Martin plays Neal Page, a successful man in marketing who's commuting from a big building in New York to a big home in Chicago where his family, comprised of three perfect little kids and picturesque pensively beautiful wife, anticipates his return home for Thanksgiving. The gods decide to inflict all manner of hellish delays and detours upon Mr. Page, including cancelled flights, dodgy cab drivers, missing rental cars, and broken trains. 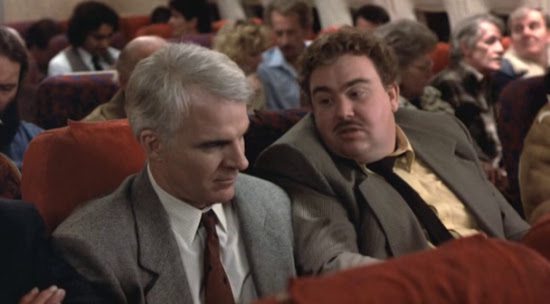 Candy plays Del Griffith, the man the gods have assigned to accompany Page on his journey. Griffith is a travelling shower curtain ring salesman, a gregarious, impoverished, low class fellow standing in contrast to the wealthy and fastidious Page. 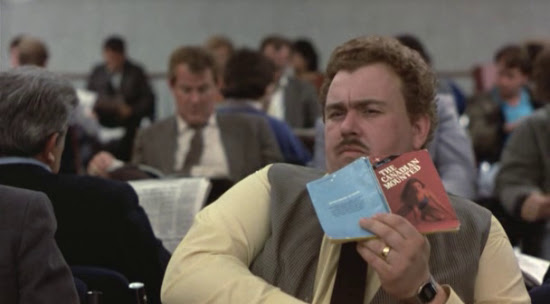 I'm very sorry to say it seems that The Canadian Mounted is not a real book. But John Candy enjoying the book in an airport lounge is such a wonderful image.

Griffith had inadvertently stolen Page's cab earlier and so when their flight's cancelled and every nearby hotel is fully booked Griffith offers to get Page a room at a hotel where he knows the manager. Of course they end up sleeping together. 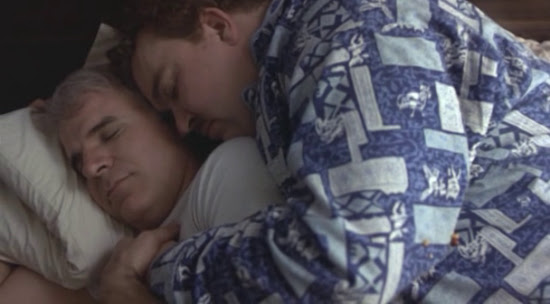 Well, in the same bed. This is the first of several instances where the two of them are thrown together as they try and make their way from Wichita to Chicago. The comedy in the film is generally forced--it doesn't make sense that Page doesn't see before he gets in the shower that all the towels are wet and scattered around the room, nor does it make sense that he fails to see Griffith's socks in the sink before he uses it. It doesn't make sense that the fastidious Page, tramping the long distance back to the car-rental place after he found his rented car missing from his space, would expect to be able to get a car after he's thrown away his receipt. 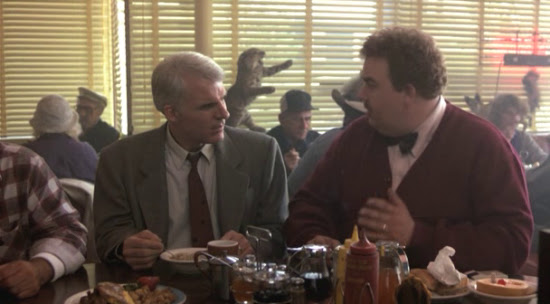 Neither Page nor Griffith is a really extreme personality, neither of them is a caricature. They both exhibit genuine concern for each other and aren't oblivious when they push each other's buttons. Page's main character problem is simply his inability to get home and in one scene where he snaps and yells at Griffith about how Griffith tells boring stories and is generally obnoxious, Griffith's reply, his "I'm an easy target" speech, isn't so much about Griffith's worthiness as a human being as it is about how distant he is from the real cause of Page's woes. The movie ultimately is about not allowing one's own unrelated needs to harm the people around us.

Posted by Setsuled at 5:20 PM
Email ThisBlogThis!Share to TwitterShare to FacebookShare to Pinterest