Trying to Fix Your Eye

Here comes a Vertigo nerd post. I warn you for possible spoilers ahead (in case you haven't seen Vertigo) and, of course, the nerdiness.

A couple days ago I finally got around to watching the Vertigo blu-ray. I'd been hesitant to watch it since reading this post by Robert Harris who worked on the original restoration of Vertigo in 1996. I recommend reading the post and the comments--it gives you a good idea of the work that goes into restoring an old film.

Harris does say he's 90% pleased with the blu-ray. But I was put off by his apparent dissatisfaction with "the corporate world" with budget concerns that inhibited the restoration from being all it could be. In a more rational world, the movie that was recently voted by critics around the world in Sight and Sound as the greatest movie of all time would receive carte blanche in terms of preservation. But in this world, one suspects people at Universal were too aware of the fact that they'd be bringing in the same amount of money on the disk whether it's 100% or 90%.

I think the sound may actually be the best improvement. The new foley created for the 1996 restoration was at times a bit hammy. I thought the echoing rooftop gunshots at the beginning were interesting and I kind of appreciated the distinct sound of breaking tiles when Madeleine's body hit the roof. But the sound effects in this new release sit more organically with the rest of the mix. More impressively, the effects and music no longer sound like they're in a different dimension than the dialogue. The dialogue no longer sounds like it's a radio programme playing in the corner of a live orchestra.

The two moments I noticed problems with visuals were two that Harris specifically mentions;

A single problematic shot of Mr. Stewart at Carlotta's grave after his release from the hospital, exhibits extreme fade at the top of the frame. For our version, without digital tools, we were forced to go to separations, which ran out of register.

The ride to the mission at the end of the film, has problems with black levels and skin tones, and as handled, there is no way it could not.

For me, the shots actually seemed to flicker. This didn't happen on either of the DVD releases I've seen.

I would point out that Scottie actually visits Madeleine's grave not Carlotta's, but that's an understandable mistake.

Speaking of Carlotta, though, one thing the very sharp visuals of the blu-ray caused me to be more aware of is the mismatch of two different Carlotta paintings in the scene where Scottie first witnesses Madeleine viewing the portraits.

First we see this (these are cropped screenshots); 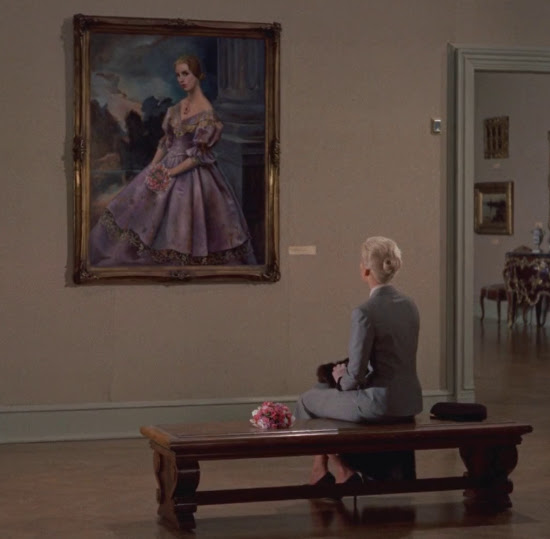 Then, after the sequence showing from Scottie's POV his comparison of Madeleine's hair and bouquet with those of Carlotta, we go to this shot; 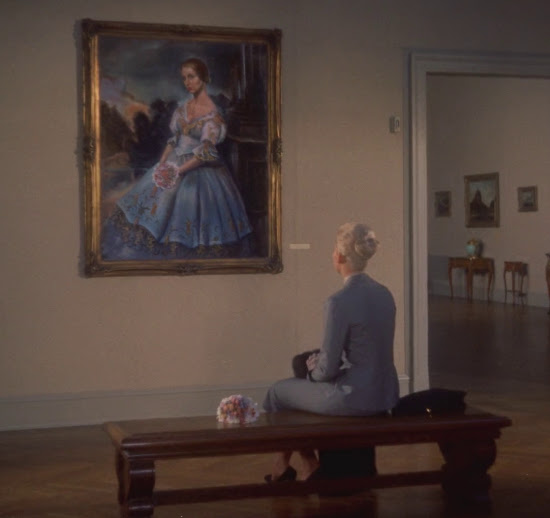 It's clearly different. I think my eye always caught on it before but I never quite consciously realised why. But now I see several big differences to indicate this was probably shot on an entirely different day--the bouquet is different, Madeleine's purse is positioned differently, the paintings and furniture in the next room are different, and Madeleine's hair is in a rougher, heavier updo. And, of course, the portrait is quite different. My guess is this shot uses a temporary portrait while the newer one was being prepared--when Vera Miles was originally to have played Madeleine/Judy, Hitchcock had already had the portrait made to her likeness so it's understandable that the final portrait would be a little behind schedule. But once he had the shot with the better portrait, I don't understand why Hitchcock would have used the old one at all. He could have recycled the same footage.

Anyway, whatever faults the blu-ray edition may have, it was rather cool watching it in 1080p. I can actually make myself some decent wallpapers straight from screenshots now.