In case the person who called me at 7:30am from a private number to breathe into my ear before hanging up was seeking to ascertain whether I'd replaced the phone killed in the laundry last week--yes, I have. In fact, Tim rather kindly gave me his old Motorola phone which, while being a bit bulkier for being six or seven years old, is clearly more expensive than my old one. It allows one to access e-mail and various other arcane things including the ability to assign ring tones to callers. I assigned Tim a happy little tune called "Jitters" as a reflection of my gratitude. So he's promised to never, ever call me.

The dehumidifiers are gone, too, and I'm working on my comic in a cool artificial environment. Artificially cool, I mean. Like The Backstreet Boys.

It's in the low 90s outside and even a bit cloudy. I've probably now gotten past the opportunity to wear this; 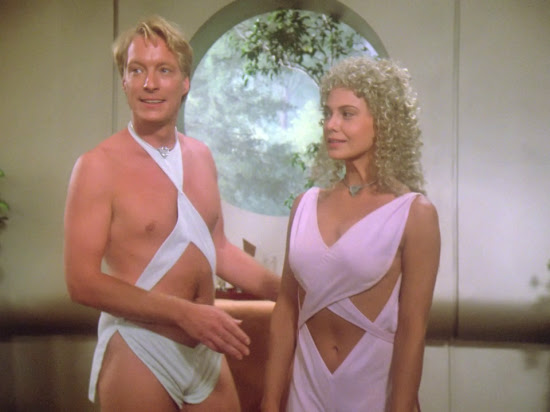 I'm guessing when they were casting for this, the eighth episode of Star Trek: The Next Generation from November 1987, they weren't looking for any Michael Fassbenders or Jon Hamms or Milton Berles, if you take my meaning.

"Justice", as the episode's called, isn't quite as bad as I remembered or as bad as its reputation would have it. It is pretty bad--the story of Wesley Crusher being condemned to death by a society of people wearing toilet paper for falling on a bed of flowers is going to be a bit silly however annoying Wesley is. But it's kind of refreshing seeing a show where a society of free love is considered innocent and the crew of the Enterprise has deep, heartfelt anxiety about insulting the laws and customs of an alien culture. If the show were produced now, I imagine there'd be a scene of Picard jumping into a flower bed, throwing down a ball and doing an endzone dance while inviting the aliens to suck it.

Why don't I ever see people dressed like this at Comic-Con? 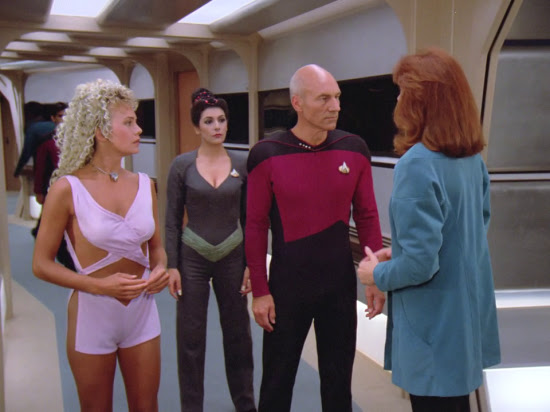