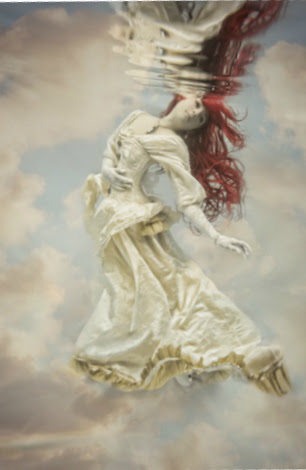 This is a photograph by Cheryl Walsh, a very talented photographer I found myself standing in line for Ballroom 20 with on Thursday. This is her web site where you'll find more photos of the kind she considers her specialty, photos of women underwater. "Well, this is a good time for that," I said. "It seems like every day a new book comes out with a beautiful woman in the water on the cover. There's Neil Gaiman's Ocean at the End of the Lane and before that Caitlín R. Kiernan's The Drowning Girl which just won a Stoker." As someone who grew up loving mermaids it's certainly not a trend I'm looking to discourage.

I asked Walsh about her influences and she mentioned Annie Leibovitz among others. Mostly she seemed to admire a wedding photographer named John Michael Cooper and she described with enthusiasm the "Trashed Wedding Dress" phenomenon in wedding photography that Cooper began, photos of new brides wrecking their wedding dresses while wearing them in a variety of ways, from shredding and rolling in mud to immolation. She told me about a photo Cooper took of a bride and groom in the desert which featured the bride crammed into the trunk of a car with the groom standing nearby holding a shovel. Walsh explained to me this wasn't meant to encourage violence towards women but rather to convey the transitional experience of going from single woman to wife. Looking at the photograph now, I can see why many people might not have gotten that impression right away. 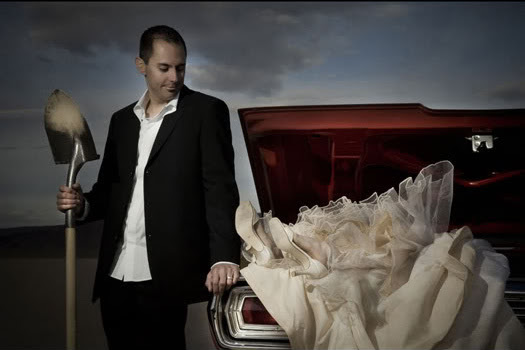 I talked to Walsh about movies. She seemed more interested in modern film and wasn't especially familiar with older ones. She said she liked J.J. Abrams and I immediately mentioned how brilliant I thought Super 8 was, at least the first two thirds of Super 8, but the last portion wasn't so bad, either. She told me she hadn't seen Super 8, that the story had not interested her.

We talked about the prevalent use of colour filters in modern movies, and she mentioned watching one movie and finding it distracting that in every shot there was a cool spot and a warm spot. I told her about a colour Ozu movie I'd watched recently and how much I admired the ability great filmmakers possessed of making complex colour compositions without filters, how complex colour compositions were probably more difficult to pull off but inevitably more interesting than the somewhat lazier two or three tone compositions one tends to see to-day. This progressed into talking about how much more real older movies often feel because of actors and filmmakers willing to do dangerous things. I mentioned Clark Gable deciding to chase and wrestle a horse to the ground for The Misfits just because he was bored waiting for Marilyn Monroe to show up on set.

Little did I know thirty minutes later I would be seeing Alfonso Cuaron, Edgar Wright, and Marc Webb in Hall H discussing the realism of classic cinema, in particular long takes and physical comedy.

Cuaron was there promoting his upcoming film Gravity, Wright was there promoting World's End, and Webb was promoting The Amazing Spider-Man 2. I immediately saw Webb as the weak link of the three and seemed to have my impression confirmed when Webb informed the audience that, in a movie, "The villain functions as a foil for the protagonist." But he kind of won some respect from me by being the one who brought up Buster Keaton. When the panel was asked about mentors they had as young filmmakers, Webb and Cuaron discovered they were both acquainted with the professor Webb mentioned as his mentor.

And by the way, yes, you read that right, I was in line for Ballroom 20 and then I got into Hall H. How did that happen?

Well, my initial plan was to get into Hall H on Thursday and sit through the Ender's Game panel in order to see Terry Gilliam's panel. Then I found out Gilliam had cancelled his appearance and I got downtown so late I figured there wasn't a chance of getting into Hall H anyway. I saw that there was going to be a Sherlock panel with Steven Moffat followed by an X-Files panel with Gillian Anderson and David Duchovny in Ballroom 20. I honestly didn't think there'd be too much of a draw for those. It's not like Benedict Cumberbatch was going to be there and I'm pretty sure the last X-Files movie tanked. Well, I spent two hours waiting and chatting with the photographer Cheryl Walsh before it was clear I wasn't going to get in. It turned out there had been enough die hard X-Files fans camping overnight to make it impossible. I did get this picture while I was in line of a rather adorable female Samurai Jack and her boyfriend Aku; 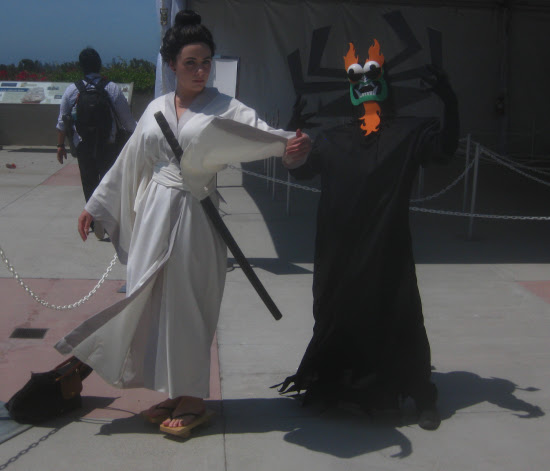 I think she actually looks a bit like Elizabeth Taylor.

Anyway, after I gave up on Ballroom 20 I decided to see what the line was like for Hall H, just out of curiosity.

There was no line for Hall H.

For those of you unfamiliar with how things work at Comic Con, it's been just about unheard of for there not to be a perpetual snake of humanity coiled and sweating in the east side of the convention centre. I haven't been able to just walk into Hall H since 2004 and this was less than an hour before the Ender's Game panel on which everyone knew Harrison Ford was going to appear. Harrison Ford, whose surprise appearance at last year's Con was perhaps the biggest story to come out of that Con.

I got into Hall H just as Edgar Wright was joining the other two directors onstage for the above mentioned panel. At one point, the three directors were asked about Steven Spielberg recently predicting that the film industry was heading towards an "implosion" and that there was now much more creative talent on display on television. All three directors agreed, all three talked about how it was virtually impossible to make a small dramatic film anymore and that all the good writers were indeed going to television. Perhaps there's no better evidence for this than the fact that I was unable to get into the room featuring panels for two TV shows--one of which did not feature the show's stars--but I was able to just walk into Hall H shortly before the day's big movie event panel.

As to that panel, it was kind of cool seeing Harrison Ford live and in person, as laconic as he was. I'm sure you've already read plenty about that panel, though I haven't seen it mentioned too often that one fan from the crowd did ask the panel about the controversy surrounding Orson Scott Card's homophobia. The film's screenwriter took the question, saying how they chose to look at the controversy as an opportunity to show their support for the LGBT community. He didn't mention what form that support would take, whether there would be any portions of the film's profits donated to anyone, which is I think the only possible way of staving off a boycott considering its reluctance to send any money or publicity in Card's direction that primarily fuels the boycott. Ford didn't have anything to say on the subject except when the screenwriter mentioned how the story of Ender's Game in no way espoused homophobic sentiment, that it was in fact about understanding. Ford interjected somewhat enigmatically with just one word at this point; "empathy."

From what I've read, a lot of articles are misinterpreting Ford's surly old guy shtick as feelings of genuine distaste for being at Comic Con. I would remind everyone that Ford showed up for the 2012 panel in handcuffs. Do people really think he was kidnapped and brought to the Con by force?

I'm out of time again to-day. I'll leave you with some of the best costumes I saw on Thursday; 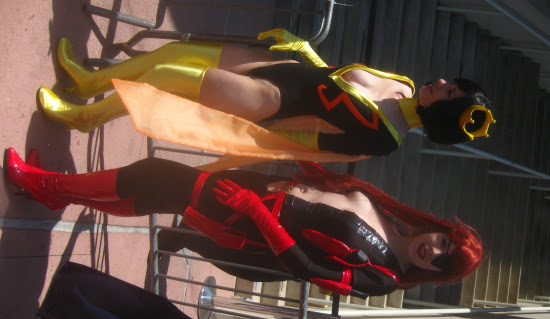 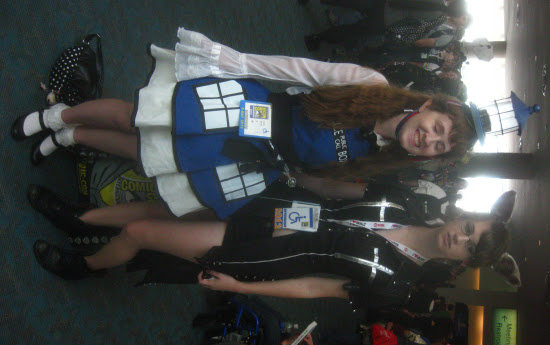 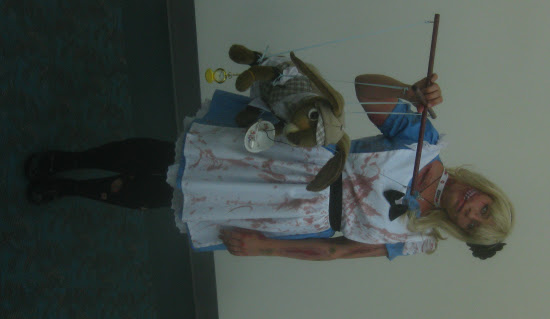 The happy guy kneels before his quarter.
He has serious men guard the restroom.
Melted mints are noticed under water.
C.S. Lewis weaves on Tolkien's wood loom.
Beelzebub breaks a believer's horn.
Twenty four hours pass on moving stairs.
In a gas lamp solar systems are born.
The floor was flush with red jokers and hares.
Tennis shoes fade over the antique pump.
The old parking dollar has gone thermal.
A swamp smoothie is the sign of a slump.
Your pal the ant should be extradermal.
Gunpowder too close to coffee is dry.
Mars has encouraged baristas to try.