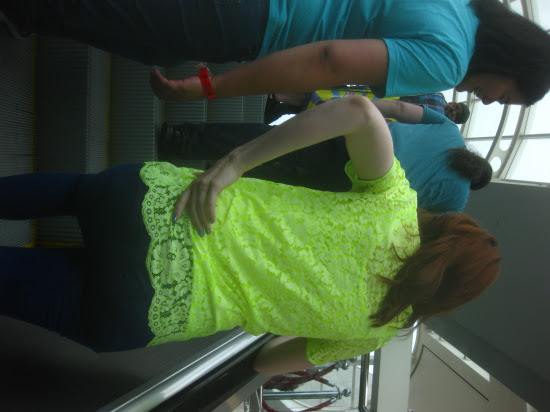 This is the cover photo for my upcoming novel, The Back of Day: One Fan's Journey Photographing the Back of Felicia Day. Members of the San Diego chapter of the Felicia Day Spinal Appreciation Club have studied the photo and confirmed in a twenty-four to one vote that this is indeed Felicia Day's back. So I'll have no naysayers.

Well, I ended up on the escalator by Felicia Day yesterday. I said, "Miss Day, can I get a picture?" Her assistant (the woman on the left) said she was in a hurry, she was late for a panel.

"That's okay," I said. "I'll just take a picture of the back of her head. I will say, 'This is the back of Felicia Day's head.'" She did turn and smile for me then, but it was a second after I took the picture. It's true!

I saw her dash from the escalator to a room for a panel. I didn't see any panels the last day of the Con but it was still a good day, the last of a good Con. The only really disappointing thing is that I didn't make it into the Doctor Who panel. I showed up about an hour later than I did for the Doctor Who panel I got into last year. But I think my drive to get in was dampened by two things--none of the pre-2005 series Doctors were going to be there, and the whole panel from last year ended up on YouTube. It's for that latter reason I decided to concentrate on aspects of the Con that weren't going to get a lot of media coverage.

As to the former reason, the fact that this'll be the first anniversary episode where all the surviving Doctors aren't gathered together has dampened my enthusiasm about the show in a kind of fundamental way. I mean, I still love it, I'll still watch the anniversary episode and probably enjoy it. I did stand in line for the panel. I guess it's like the Smiths lyric; "Nothing's changed, I still love you, only slightly less than I used to." It's the sense that people are in control of the show right now who don't understand it in the way I would like.

I did witness this; 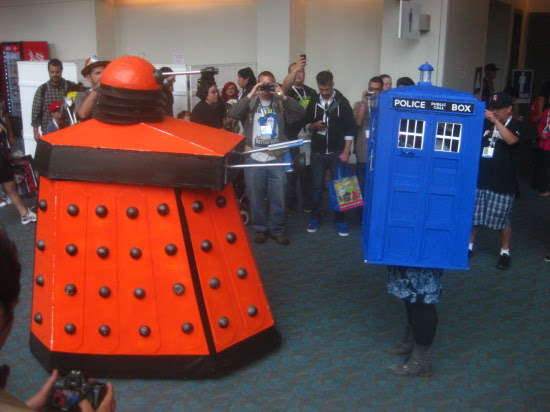 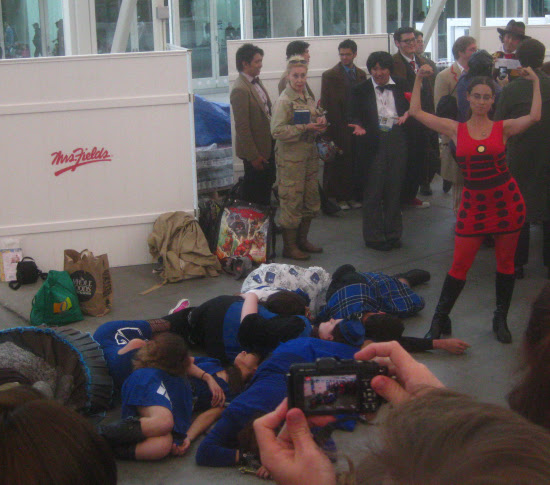 I'm not sure precisely what's happening in these pictures I only know that it's pivotal. 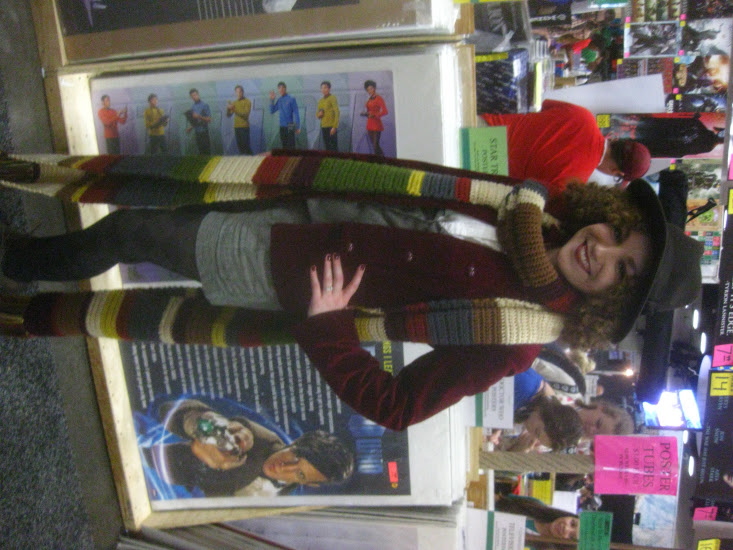 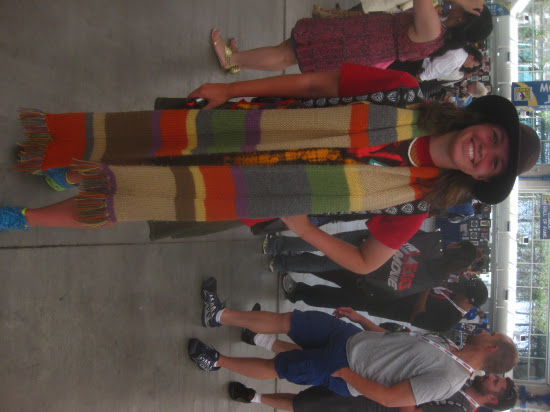 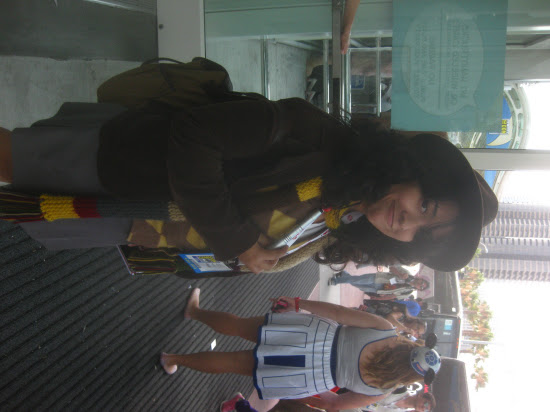 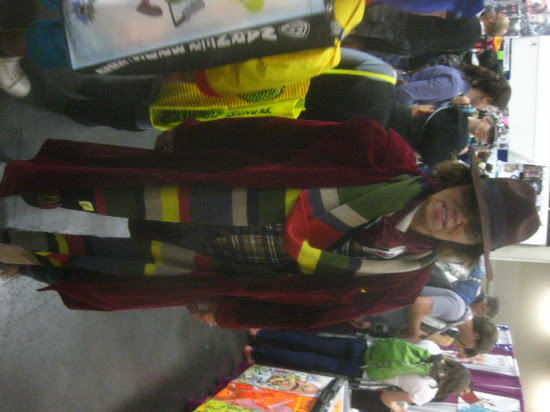 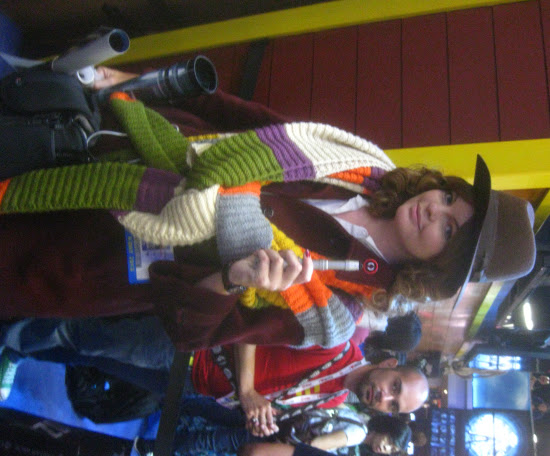 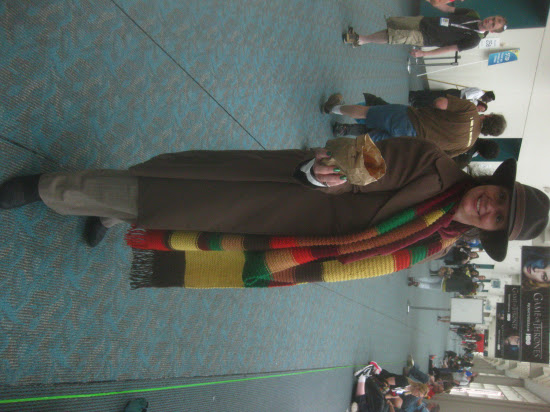 I didn't get a photo of the twelve year old, whose costume included purple tights for some reason.

If the reason BBC producers are barring older Doctors from appearing on the new series is fear of alienating the show's new sizeable female demographic, I think I can present some evidence to the contrary.

I didn't try to get into another panel on Sunday after waiting three hours to fail at getting into Hall H for the Doctor Who panel--I came close to going to see the Spotlight on Neil Gaiman panel, but I saw Gaiman in the Sandman 25th anniversary panel the day before and figured Sunday would be better diversifying my Con experience. I mainly just wandered the floor. Here's a lousy photo of Ron Perlman signing autographs with the rest of the Sons of Anarchy cast; 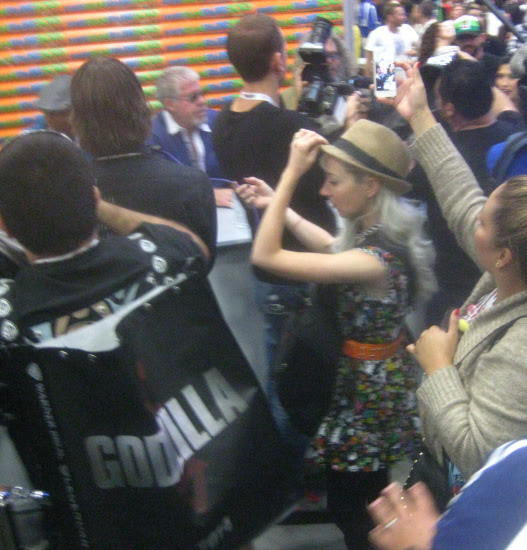 The girl in the foreground reminds me to mention this is the first year I didn't run into The Girl Who Makes Dresses Out of Con Bags: 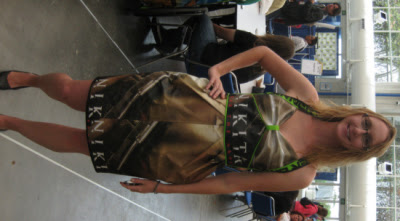 This picture is from 2010, the first year the Con started handing out bags large enough for people to make whole outfits out of. Without trying, I ran into this girl three years in a row, and each time she'd made a whole dress overnight from the new bag. A lot of people have imitated this girl but she was the first. I got a picture of one of the imitators this year. 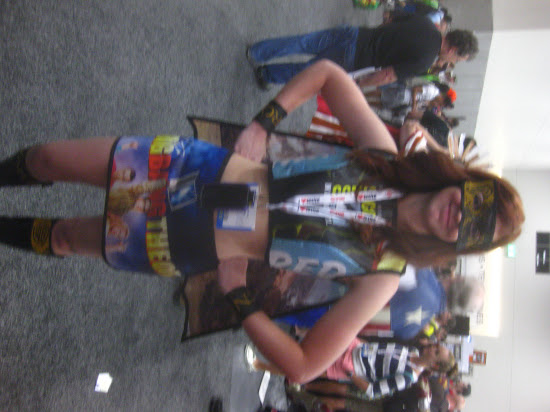 The mask and cape were nice touches, but it was last year's bag.

That's about all I have time for to-day, but I'd expect at least four more entries. Plenty more Con stories to come. I'll leave you with this picture of another Buffy the Vampire Slayer cast member, Clare Kramer who played the villain Glory. She wasn't in a hurry for anything. Oh, show business! 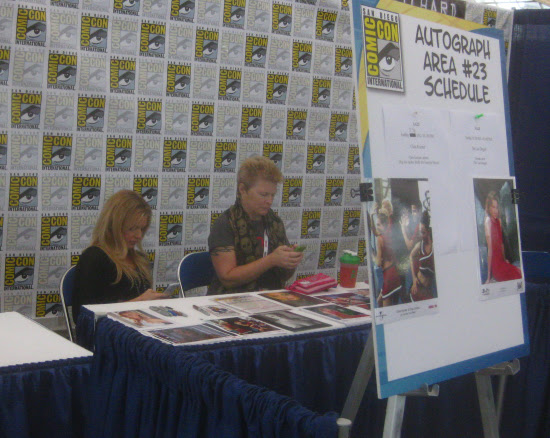 Posted by Setsuled at 10:05 AM
Email ThisBlogThis!Share to TwitterShare to FacebookShare to Pinterest