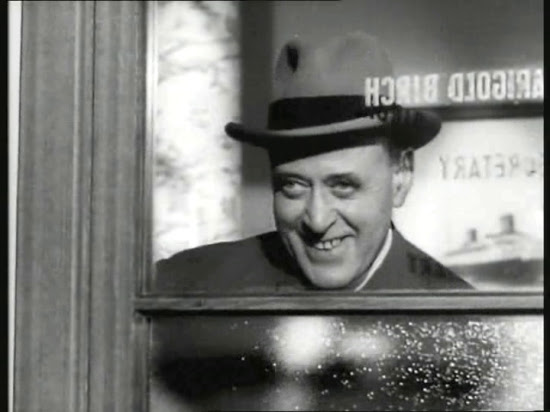 Sometimes the wiliest of assassins can be thwarted by the embarrassing misunderstandings between man and woman. This is the premise of 1956's The Green Man in which Alastair Sim plays a pleasantly sadistic gentleman whose latest high profile assassination attempt is frustrated by George Cole as a simple minded vacuum cleaner salesman and Jill Adams as the naive young future bride of Sims' poet neighbour. This is a delightful little screwball comedy.

Cole's character is named William Blake and in one scene where he's trying to concoct a theory as to how the woman's corpse in the piano downstairs came to be murdered, Adams' character, Ann, is sitting on the bed in negligee and remarks how her husband probably won't have memorised his new poem because "it's modern."

"Well, then he can just make it up as he goes along," says Blake in off-handed criticism perhaps from the ghost of his namesake. 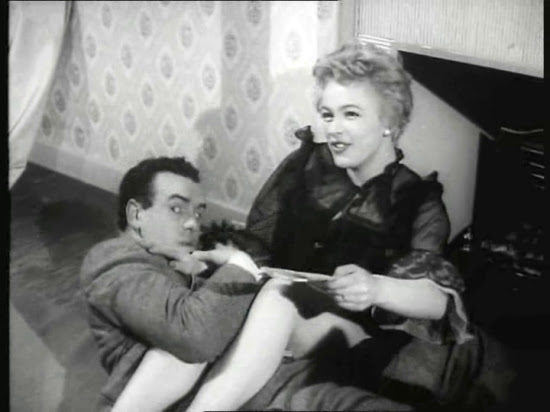 The forgotten poem is just one of the pretexts for a series of scenes where Ann's fiancé returns home to find her and the salesman in a compromising situation with an improbable story about murder. The comedy is in how absolutely earnest and innocent the two look while any rational being would probably assume based on the evidence that the two had been making out just before Ann's fiancé discovered them.

The movie continues like this--Sim gets top billing but most of the movie centres around Cole and Adams. Cole looked very familiar to me but I couldn't remember from where. I looked him up and saw that I knew him from 1970's The Vampire Lovers, a movie with several people I've recognised in a surprising variety of films--Jon Finch, who I recognised in Roman Polanski's MacBeth and in a BBC production of Shakespeare's two Henry IV plays in the title role, and the director of The Vampire Lovers, Ray Ward Baker, was a name I recognised when I saw he'd directed the Marilyn Monroe/Richard Widmark movie Don't Bother To Knock. The Vampire Lovers has turned out to have a rather improbable pedigree. 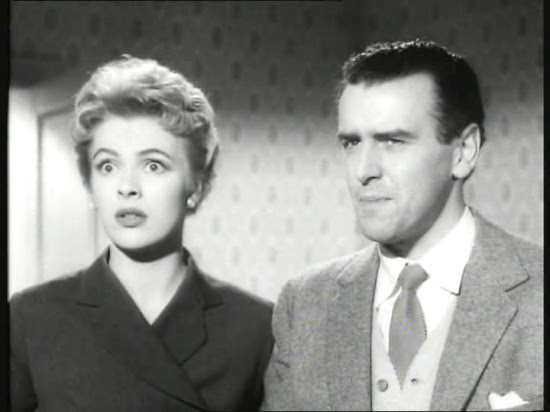 Cole shows himself to be a great hand at the screwball comedy, playing his role with a quick earnestness matched perfectly by Adams.

I would have liked to have seen more of Sim, whose only really entertaining scene involves his attempts to dispose of the body early on while carrying on a chess game with his friend, a police inspector. 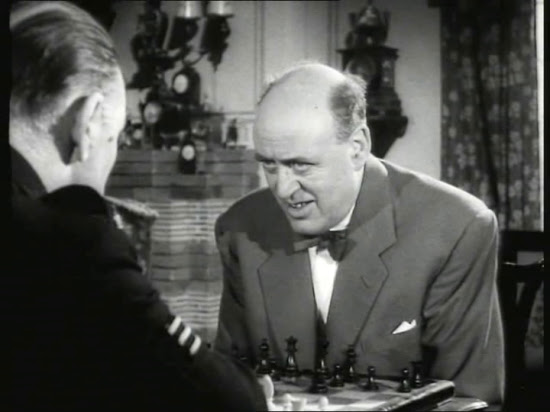 Sim is hurried and anxious, frustrated when he finds the can't throw the game as quickly as he'd like, but there's still a fundamental detachment and amusement in him that I see distinguishes Sim's particular charming ghoulishness.

In case you're wondering if I analysed the chess game, the two men never actually seem to get very far past the opening, from what I can see.

Posted by Setsuled at 2:56 PM
Email ThisBlogThis!Share to TwitterShare to FacebookShare to Pinterest