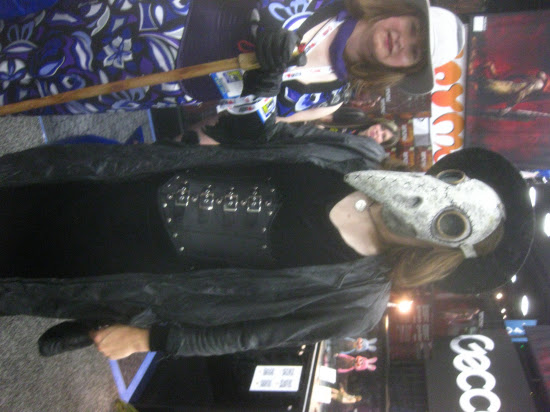 The medical staff at this year's Comic Con was ready for anything. This woman is dressed as a fourteenth century plague doctor.

As usual, the Con had a sizeable Renaissance Fair crowd in impressive costumes; 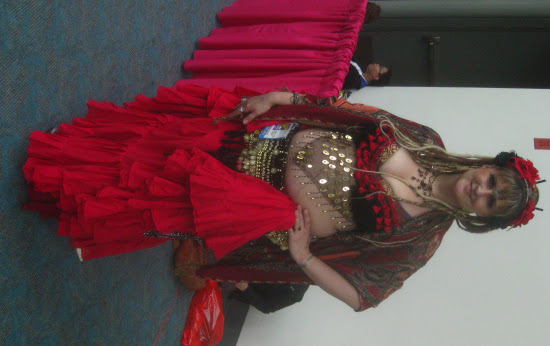 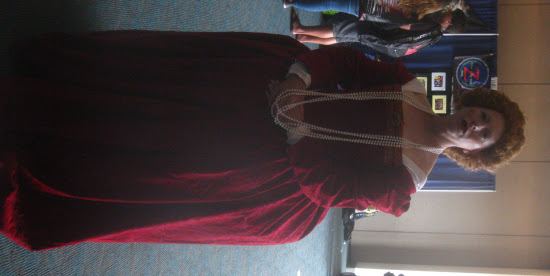 On the southern exterior mezzanine, there was as usual a mediaeval melee;

This wasn't far from where I'd stood in line for Ballroom 20 the day before from whence my view to the south was this; 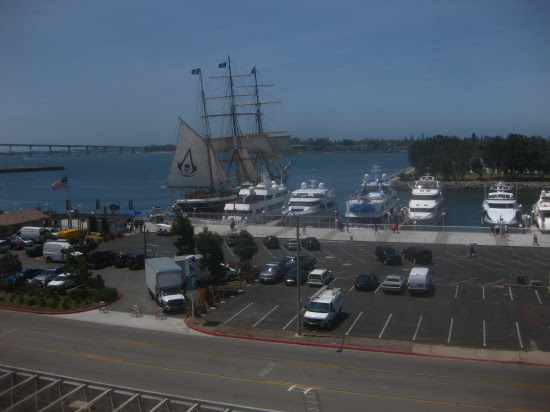 One of these things is not like the other. In fact, despite the false name of "Jack Daw" pasted on the stern, the ship on the left is the Star of India, the second oldest ship in the world that still sails regularly. She's normally docked at San Diego a bit further to the west but she was brought behind the convention centre for the Con to be slightly cheapened by the Assassin's Creed logo on one of her sails. 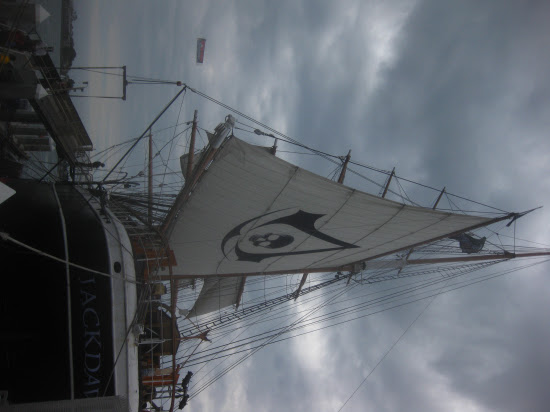 Here's a blog entry with pictures I posted in 2010 when I went aboard the Star of India in her usual function as floating museum.

I saw the Assassin's Creed 4 panel on Friday which consisted of the game's developers, the guy who voiced the assassin character, and Todd McFarlane, who was making action figures based on the game. The game takes place in the late eighteenth century and is a pirate adventure, its lead character, despite wearing the usual white assassin hoodie, is a new character, a pirate trained as an assassin. The game's director talked about how he'd done a lot of research into the period and among other things discovered that most of the sailors manning British naval vessels did not wear uniforms, instead generally wearing something like a checked shirt and pants. He decided this would make it too difficult for a player to identify a target so he put all the enemy sailors in British officer uniforms. Because we wouldn't want the challenge of identifying a target to be part of our assassin game, would we?

From the preview footage, although the makers talked as though the game took place in a large sandbox, it looked as though the game consisted more of watching pre-scripted animations than actual contributions from the player. And the cinematic sequences might give some the impression that sailors in the late 1700s were frequently struck by a malady that deadened the muscles in their faces--the uniformly beefy, washboard abs men in the trailer rarely had facial expressions.

Perhaps then it's appropriate that this panel was preceded by a panel featuring the creators and stars of a new CW series called The 100, its cadre of homogenous pretty teenagers almost indistinguishable from the stars of the upcoming Twilight knockoff movie Divergent, the panel for which preceded the Ender's Game panel on Thursday.

By the way, I did see the panel for The Zero Theorem and I'm glad I did, despite Terry Gilliam's absence. The producers and Gilliam's daughter, Amy, were the only people on the panel and did not really represent the film well. One person from the audience asked the producer how the film would be different from Gilliam's earlier films Brazil and 12 Monkeys to which the producer could only reply, "Er, you'll just have to see the film."

Gilliam did record an entertaining video message for the crowd in which he pretended to be terrorised by the NSA. Then we got to see the first ten minutes of The Zero Theorem which really was a joy. It features Christoph Waltz as a brilliant mathematician whose hair is falling out. He lives in an absurd, aggressively corporate world very similar to the one depicted in Brazil and it's really no wonder someone would want to know what separates this film from Brazil. But, honestly, even if this film is basically Brazil 2 with Christoph Waltz in the Jonathan Pryce role, that's more than enough for me. Just the fundamental sense of mad, understated cartoonish humour pervading the ten minutes I saw tells me the movie is another exhibition of Gilliam's genius. My favourite subtle bit of humour, as Waltz walks through the city of visual and audio commercial noise, was an advertisement for The Church of Batman the Redeemer.

There was also a great, lengthy sequence of Waltz being examined by a panel of doctors played by Peter Stormare, Sanjeev Bhaskar, and Ben Whishaw. Waltz tells them his anxieties, his belief that he's dying, while the three doctors try to reassure him he's not, clearly trying to impress him with the authority of their white coats and position in the room seated side by side while Waltz is on an examination table. Whishaw has a really funny moment where he goes off on a tangent about how, after all, we're all dying.

Speaking of Batman, here's one I saw on Friday; 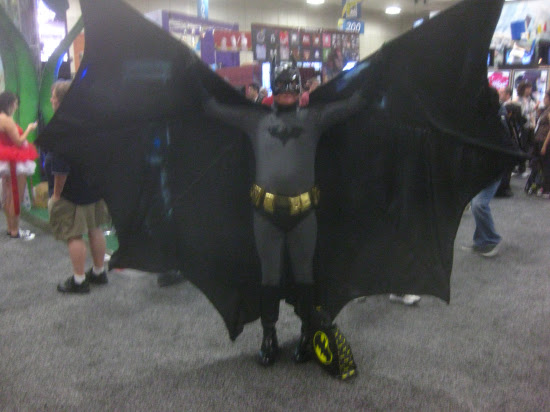 There were, as usual, a few hundred women dressed as Harley Quinn but I failed to get any pictures of them. But I certainly brought from the Con plenty of reminders that Batman has the best rogues' gallery. 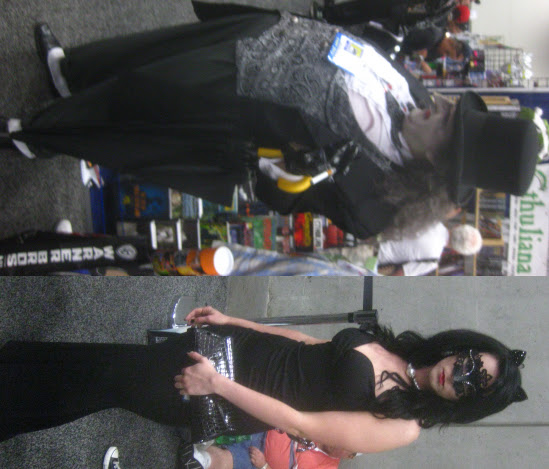 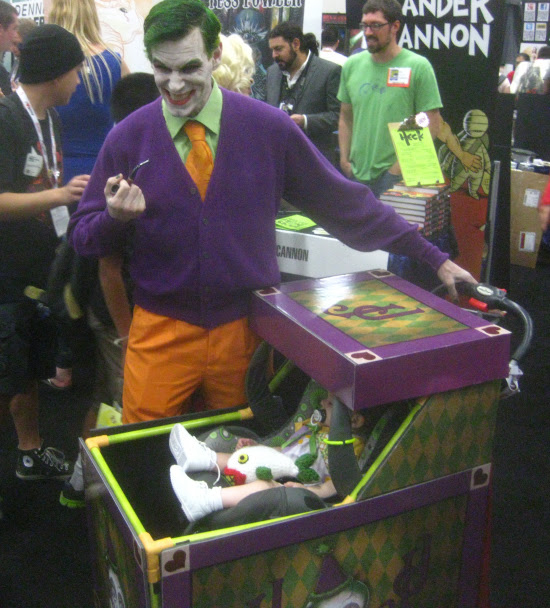 I decided to eat lunch at Seaport Village on Friday--a little tourist area to the west. On my way back, I ran into Adam Savage leading a bunch of people in matching hats and false van dykes. 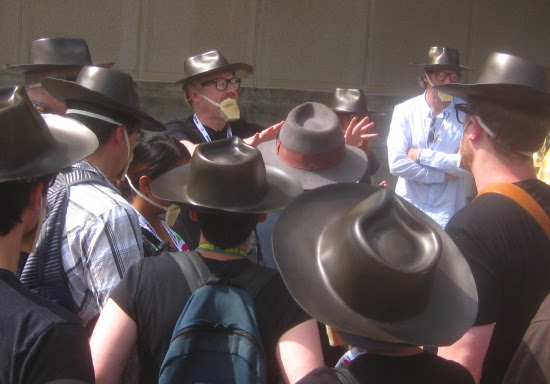 Savage has a real van dyke (despite the false one he's wearing in this picture) and normally wears a black fedora so I think the idea was to create some kind of team of Adam Savage clones. What myth this is meant to bust I have no idea.

Once again, I'm out of time to-day. I think I've still got at least three more entries worth of material. By the way, this woman made a full recovery; 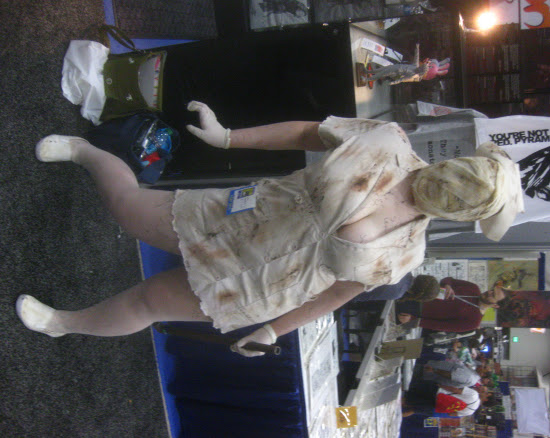 Posted by Setsuled at 1:11 PM
Email ThisBlogThis!Share to TwitterShare to FacebookShare to Pinterest