Seeking the Strange for Days

I have often been utterly astonished, since I came to the north, to find persons who could speak of the singing, among slaves, as evidence of their contentment and happiness. It is impossible to conceive of a greater mistake. Slaves sing most when they are most unhappy. The songs of the slave represent the sorrows of his heart; and he is relieved by them, only as an aching heart is relieved by its tears. -Frederick Douglass from Narrative of the Life of Frederick Douglass, an American Slave

To me, the most interesting thing about 1995's Strange Days is the character of its central protagonist, Lenny, played with desperate, sometimes cowering empathy by Ralph Fiennes. In a world of increasingly severe violence and social unrest, he seeks to elevate the lives of himself and others with stories. He knows what he's pushing isn't escapism but an answer to a basic human need for a more textured, more interesting existence. Aside from Lenny, the film is a decent action film which draws influence from Philip K Dick, William Gibson, and David Cronenberg. But it's a much more conventional story than those produced by any of those men.

Lenny peddles, in a fictional 1999 (future to the film made in 1995) an addictive virtual reality apparatus called a "SQUID", a cap that can both record all of the wearer's sensations--sight, sound, taste, touch, and smell--and play back those recordings in the body of a wearer. 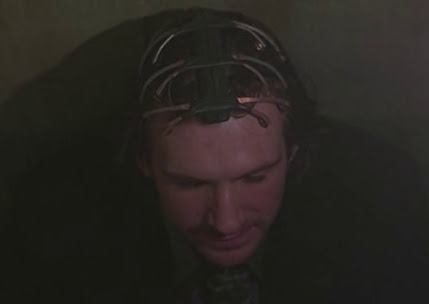 Lenny collects "tapes"--actually small disks--of mostly prostitutes and robbers and sells their experiences to people who lead less exciting lives, like a lawyer he meets in a bar in one scene who hears Lenny's aggressive and earnest sales pitch--Lenny calls himself "the magic man."

But it means more to Lenny than voyeurism and sensationalism, as his friend Mace (Angela Bassett) knows. Lenny used to be a cop and in flashback we see the two meet on the day her ex-husband had committed a horribly violent act. Mace goes to her daughter's room and finds her safely being read to from a children's book by Lenny. This is why, we learn, Mace puts up with Lenny despite her disgust over his use of the SQUID to replay experiences with Faith (Juliette Lewis), Lenny's rock star ex-girlfriend. 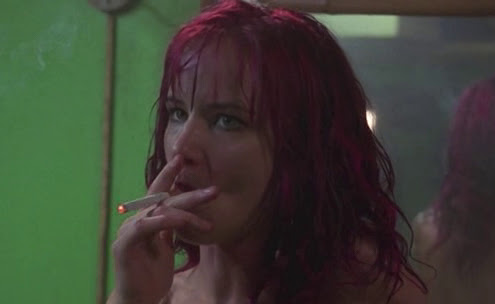 Juliette Lewis performs a cover of P.J. Harvey's "Rid of Me", an interesting contrast to Lenny's unwavering love for the woman, despite the fact that she seems now dedicated to the owner of her record label, Gant, played by omnipresent 90s action movie villain Michael Wincott, seen here in pink light. 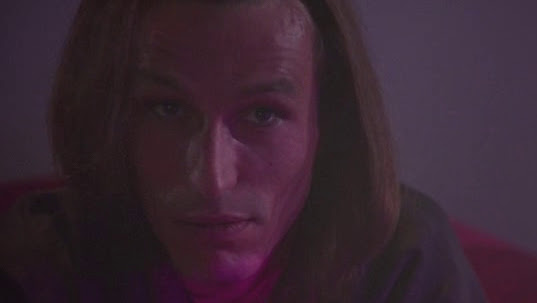 The movie certainly has a distinctly 90s fondness for gel lighting from lemon/lime alleyways;

I guess gel lighting is the 90s version of the 21st century's addiction to lens filters.

Strange Days is the second Kathryn Bigelow movie I've seen, and it's certainly better than the other one, K-19: The Widowmaker. But, having been written and produced my James Cameron, it bears many of the characteristics of his films. One of the things I love about old James Cameron movies is that if he had a woman who could kick ass in his movie, she actually looked like she could kick ass. 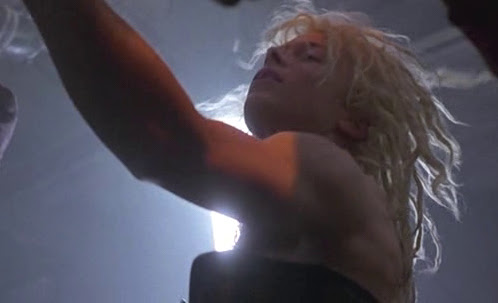 This tautly muscled lady is part of a group of thugs who beat the shit out of Lenny in one scene before he's saved by the equally badass Bassett. 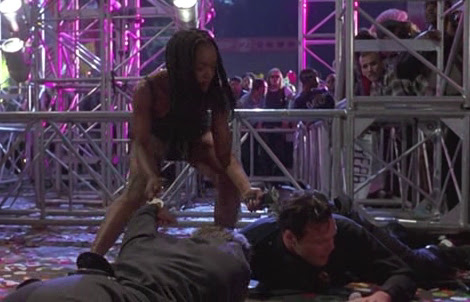 The tendency in most other films, like Zoe Saldana in Columbiana, is to use editing and angles in the vain attempt to make a skinny little dame look like she's hitting like a freight train. There's an implicit cynicism in this, I think--it's essentially saying that no woman is ever going to really look strong so why bother trying? Anyone who's seen Linda Hamilton in Terminator 2 would tell you a woman who looks as powerful as the story would lead you to believe is definitely worth watching. I would suggest it's the failure of filmmakers to recognise this that's led to the lack of successful female superhero films. Cast a female MMA fighter as Batgirl--I'm telling you it'd work like gangbusters.