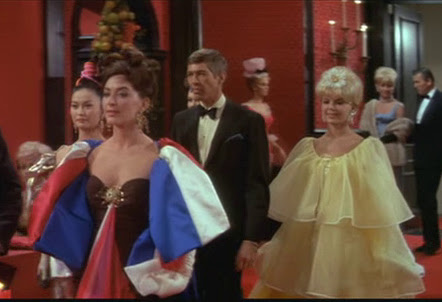 When you take your harem out to dinner, it's good to make reservations. This is something every good spy knows, as seen here in 1966's Our Man Flint, a half parody, half sincere James Bond knock off starring James Coburn. It's not funny enough to be an especially good comedy and the comedic logic deflates too much of the tension for it to be a good action/adventure film. It's also not exactly the most feminist movie in the world but it's a bit too weak to be really offensive. It's like a sexist pomeranian.

I did dig the visual style. Especially all those vintage super death machines with tapes and flashing screens with wiggling lines.

James Coburn might come off as a little too grounded for the role. For some reason Sean Connery is more fun as a pervert. Coburn feels too much like someone's dad. And he's barefoot too much in the movie--I don't generally approve of bare feet on men, but I especially object to Coburn's gnarled dogs.

But I guess the 1960s insisted bare feet were necessary to establish someone as a master of Eastern martial arts and philosophy.

Flint is established as being unbelievably wealthy and talented and reluctantly accepts a mission from his old boss in the U.S. military to stop a group of scientists from controlling the world's weather. He doesn't carry a gun, he calls the one he's offered "crude". All he carries is a cigarette lighter that works also as a blow torch, radio, and 82 other functions. Then he's almost immediately captured when he breaks into a safe. Fortunately, one of his captors is a beautiful woman who of course immediately falls for him and wants to join the harem.

Naturally she turns against her nefarious organisation who, would you believe, wanted to turn her into a sex slave! Fortunately Flint counters the hypnosis by telling her she's "not a pleasure model." She's saved, she smiles, and files in with the five other beautiful women whose entire purpose in life is to serve Flint's pleasure.

This could in fact be the joke. It's pretty limp either way.

Posted by Setsuled at 1:49 PM
Email ThisBlogThis!Share to TwitterShare to FacebookShare to Pinterest