And Way Beyond the Pale

I wonder who chose the tattoos Ryan Gosling's character has in The Place Beyond the Pines. I'm not sure what the one on his left arm is meant to mean but it strikes me as suiting his character rather well. His character is one of the best things about this very good noir crime film. It's a movie about human nature being at odds with a society corrupted to suit the needs of other flawed human beings. Many critics have said the film feels more like two films, the first and second halves so distinctly separate in terms of plot and quality, the first half being definitely the superior. I agree, but the latter portion isn't bad.

Gosling plays Luke Glanton who, as the film opens, is a daredevil motorcycle rider for a travelling circus. He runs into an old fling named Romina (Eva Mendes) who he met the last time he was in town. 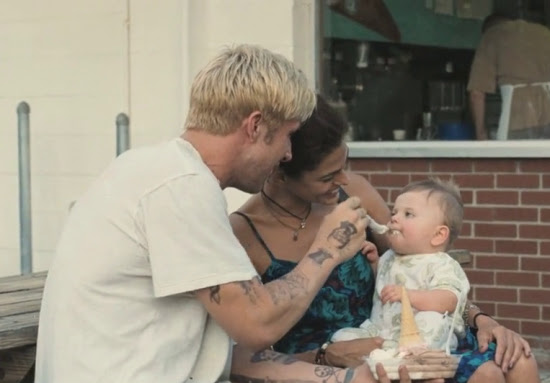 Luke discovers Romina had his child, Jason, who is now a year old. She's reluctant to tell him about it--she lives with a boyfriend now, a more stable and responsible father figure for her child.

I like that someone made a modern film about a guy in a travelling circus who accidentally gets a woman pregnant. But it gets more old fashioned than even that--Luke decides he wants to stay in town and help support his child, to be there for the kid like his father never was. So he quits the circus and starts robbing banks. Too bad Peggy Cummins wasn't around to team up with him. 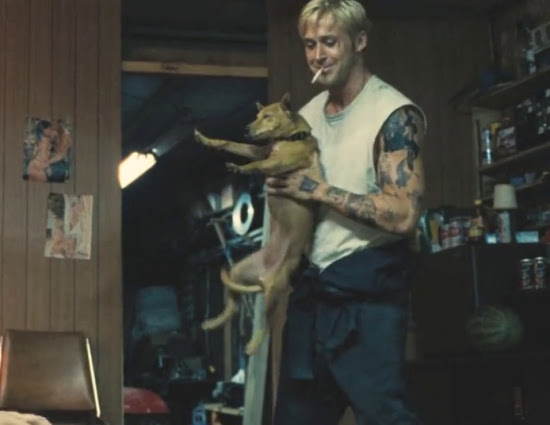 What makes the first half of the film so great are director Derek Cianfrance's understated direction and the performances by Gosling and Mendes. This is only the third film I've seen with Eva Mendes--the other two being Once Upon a Time in Mexico and The Bad Lieutenant: Port of Call New Orleans. I like both films but it was in the latter that I was first really impressed with her. 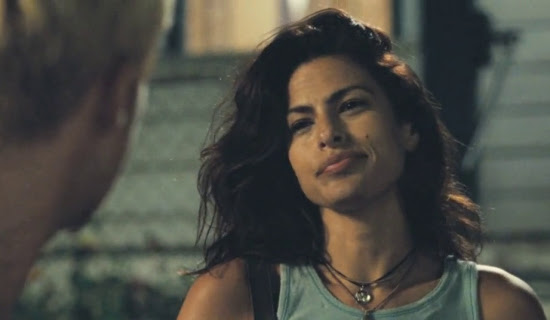 In The Place Beyond the Pines, she brilliantly plays a woman caught between two versions of her conscience: to tell Luke about their child or to avoid doing so and hopefully maintain the good situation she has for the kid. She makes this old scenario seem authentic, as does Gosling. Her open and emotive technique contrasts interestingly with Gosling's quieter, more restrained style.

He reminds me of Marlon Brando or Paul Newman. Gosling can hold a pause very effectively. He takes several seconds where he essentially does nothing, then breaks it with a smile or a frown.

Also really effective is Ben Mendelsohn as Robin, a mechanic who lives at the edge of a forest and who, impressed with his ability to handle a motorcycle, lets Luke stay in his trailer after Luke quits the circus.

When Luke tells Robin about his money troubles, it's Robin who suggests bank robbing. Robin tells Luke he's robbed banks a couple times, telling him if you do it in moderation you don't really need to worry about being caught.

Luke is reluctant at first but finally agrees to try it with Robin using a white truck for a getaway car--the idea is Luke speeds off from the bank on his bike and rides into the back of Robin's truck where the cops won't see him.

Robin gives Luke a gun but explains it's best not to use it, that going without a gun entirely may be preferable--the most effective means, says Robin, is just to hand a note to the most nervous looking teller. 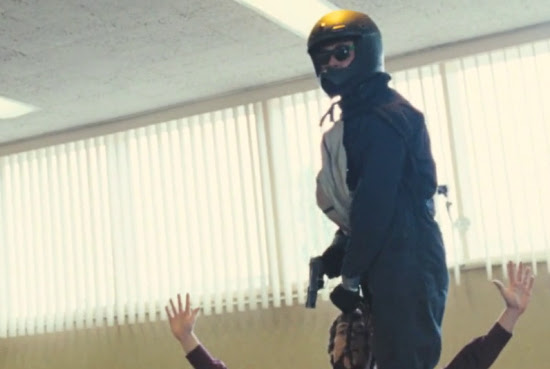 Robin doesn't anticipate that the soft spoken Luke has an intensely violent and sometimes reckless personality but it makes sense when one considers his former profession. Far from a quiet note, Luke decides to shout at everyone, walk across the desks, brandishing his pistol. And far from robbing a moderate few banks, Luke quickly becomes addicted to the empowering vocation--empowering both for feeding his compulsion for danger and control and for the money it provides him to prove to Romina that he's a viable father for Jason.

The movie eloquently conveys the very noir-ish story about a man whose violent and unconventional nature and skills drive him farther from his most fundamental needs. 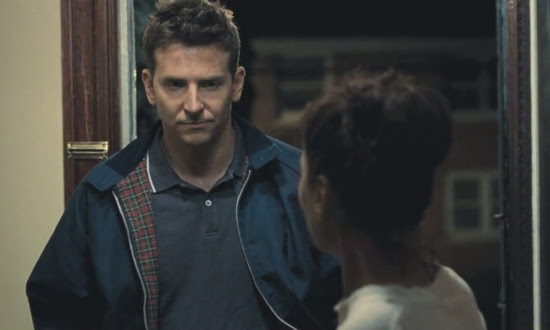 The second half of the film focuses on a rookie cop named Avery (Bradley Cooper). This latter portion is much more plot driven but it does have an effective story about a basically good but imperfect man falling prey to rampant corruption in the police force. Bradley Cooper doesn't give a bad performance, but it's hard to top Godling, Mendes, and Mendelsohn in the first act.