"All men are mad in some way or the other; and inasmuch as you deal discreetly with your madmen, so deal with God’s madmen, too—the rest of the world."
-Abraham Van Helsing

The world has grown very comfortable with capitalism, has settled into the idea of "earning" wealth equating to virtue. So why should it feel wrong when someone offers a one billion yen bounty for the death of a child murderer? That question is central to Takashi Miike's Shield of Straw (藁の楯 Wara no Tate). It's a film that questions the meaning of morality. It has several good action sequences but it is not really an action film. Nor is it intended to be realistic as many critics have presumed. It's a very good movie about this difficult question and all the action in the film is primarily to serve dialogue regarding the question.

The film is primarily told from the point of view of Mekari (Takao Ohsawa), one of a handful of police detectives charged with safely escorting the child murderer Kyomaru (Tatsuya Fujiwara) to Tokyo. This is somewhat challenging because the grandfather of one of the victims is offering a 1 billion yen reward for the death of Kyomaru by legal or illegal means. Every citizen and cop they encounter on the journey is a potential threat to Kyomaru's life. 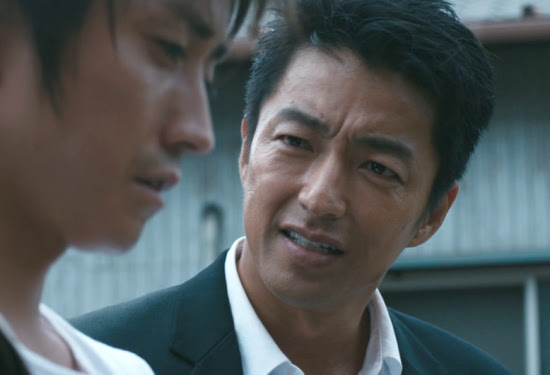 Mekari himself is tempted--his wife was murdered by a truck driver years earlier and never brought to justice. His partner, Shiraiwa (Nanako Mastsushima), is a single mother. The two closest to Kyomaru are among those with the strongest motives to kill him.

One could draw comparisons to many Westerns--3:10 to Yuma, Ride the High Country or The Naked Spur but unlike those films, which feature moments where the villain is sympathetic, there is no redeeming quality to Kyomaru's personality. He raped and murdered several children and he boasts about it.

But he doesn't want to die--he turns himself into the police because he doesn't feel safe with the gangsters who'd been protecting him. Why is he compelled to provoke his protectors with boasting and mocking them? One might see this film as a spiritual sequel to The Dark Knight--the villain wants to live but he'd like to break the hero even more.

It's not hard to see why--Kyomaru has lived assuming morality is meaningless. If Mekari finds real value in his ethics, then Kyomaru's cynicism can no longer insulate him from the horror of his actions.

Mekari's position is trickier. The people who try to kill Kyomaru end up being good people who want the money for poor or ill loved ones, people who wouldn't mind going to prison so long as they get the money. There are also parents of other victims who gun for Kyomaru. Everyone assumes Kyomaru is going to get a death sentence anyway so why shouldn't someone kill him for money or for revenge?

This movie pits self interest against the social contract in a rather brutal manner. In the attempt to kill Kyomaru, one of the otherwise good people takes a child hostage with a knife. Several police officers are killed in the effort to keep Kyomaru safe. Such disorder is one argument as to why Kyomaru's fate should be mete out by the system. But what about the more fundamental question--if this system is in place to satisfy the collective morality, why shouldn't Mekari take a short cut?

The movie wisely doesn't answer this directly. The answer is conveyed more by feeling. But the film does show one moment where even Kyomaru can't suppress his admiration for Mekari.

In my favourite moment, Mekari tells Kyomaru about what he calls a fairy tale he tells himself about the ghost of his dead wife.

The performances are great, especially Takao Ohsawa's, and it's well shot. The tension is great, aided by a sickening feeling that the heroes may be ashamed of their victory in the end, that there may not be a right path or, even worse, there may be one.