The Worms that Bind

First of all, congratulations to my sister, Chelsea, and her boyfriend, Alex, on their engagement to be married. Their relationship is already better than the protagonists' of Upstream Colour (awkward segue, I know).

Ostensibly a science fiction film about mind controlling, parasitic worms, this film directed by Shane Carruth (who also wrote and starred in it) plays as a nice experiment with cinematic language to portray the mechanics of human relationships and the effect of social mores on them.

I've seen the film compared to the work of Terrence Malick and Upstream Colour does feature imagery reminiscent of Malick's tendency to avoid establishing character point of view by using extreme close-ups of parts of people's bodies and a detached editing style creating a sense of omniscience. The subject, in Upstream Colour as in Tree of Life, is never visible and all the people are objects. As in, always kept at a distance from us as though we're studying them from an alien place.

I would also say the film owes some debts to Ingmar Bergman's Persona and Jean-Luc Godard's Alphaville. Like that latter film, the two protagonists seem detached from themselves when they meet, eminently Post Modern characters who analyse in dialogue how they're supposed to behave as characters within the story. 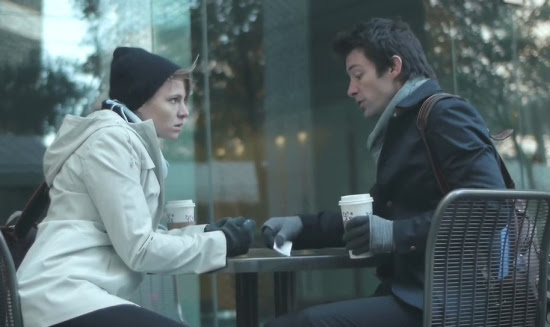 In this case it's because both of them have previously been carriers of the peculiar worm which creates an extraordinary psychic connexion between two people. After Kris (Amy Seimetz) and Jeff (Shane Carruth) meet on the train they go out for coffee. But it's hard to tell why--their conversation is perfunctory and irritable. She tells him she works for a place that makes signage and he accepts her business card with annoyance, telling her he will never have need for such a thing. But they leave together--the tone of their conversation is like two people who've been forced to partner up by their bosses.

This meeting occurs almost halfway through the film. The first part of the movie focuses on Kris who we meet as an aggressive, A-type personality who works in some aspect of film production. We hear her making phone calls and pushing through her decisions, firing and hiring people.

Then she's kidnapped at a club by a man credited as "the Thief". He forces her to ingest a worm which makes her completely compliant to his vocal commands which function like hypnotic suggestion. He tells her his face is made of the same material as the sun causing it to be so bright that she must avert her eyes, which she does. He tells her an ordinary glass of ice water is the most wonderful refreshment she's ever had and he allows her to drink from it in return for copying down sections of Henry David Thoreau's Walden. This is to keep her occupied when he's not forcing her to slowly sell her home and antique coin collection.

There's never any suggestion in the film that she is raped. Which seems strange as it seems the first thing one assumes an attractive woman would be drugged and kidnapped from a nightclub for. In fact, there's very little sex in the film. And yet, the shots of the worm working its way through the inside of Kris's body certainly convey the sense of a physical violation. When one considers the worm as a phallic symbol, the absence of literal sexual assault in Kris' captivity compels me to ponder it as a possible metaphor for such an assault. Previously an assertive and independent woman, Kris is subjugated and subdued by the Thief's philosophy.

This impression is heightened by the omniscient POV--we are neither seeing the situation from the Thief's perspective or Kris'. The music is melancholy and understated as though we're considering a broad and inevitable situation playing out rather than the interactions of just two specific characters and we're reflecting on this as a portrait of human nature in general.

When the Thief is done with her, Kris is taken in by a pig farmer who transfers her worm into a live pig. Apparently he's done this with many other victims of the Thief, including Jeff and it's caused many of the pigs in his farm to share a psychic bond with the victims.

Kris and Jeff feel the fears and needs of the pigs without realising where the feelings are coming from. But the most significant incident of empathy with the animals comes with the only sexual intercourse that occurs in the film. In bed after sex, Kris and Jeff are shown as also lying under sheets in the middle of the pig pen.

At this point, I pretty strongly had the impression that Shane Carruth has a very negative opinion of sex. I think it's connected to a statement the film is making on the relationship between humans and religion.

The pig farmer is credited as the "Sampler" because of his hobby where he records various sounds in nature as well as candid bits of human interaction. In caring for the pigs, helping to conduct the empathic worms between people and animals, and being someone who pays sharp attention to nature, the Sampler is both godlike and reminiscent of the philosophies of transcendentalists like Thoreau. The Thief, who tasks Kris with copying Walden, is also a gardener and harvests the worms from his flower pots.

Thoraeu was no great fan of organised religion though we could see the Thief and the Sampler as the attempts of organised religion to regulate the organism, the human being. The Thief has purely selfish motives, much as religion can be used to exploit people, and the Sampler seems to work under the impression that humans are hopeless and somewhat disgusting animals who must be regulated and dominated, even as he's sensitive to their feelings and needs.

Carruth seems to be suggesting with his shot juxtaposing the post-coitus couple with the muddy pigs that in indulging in such carnal desires the couple is behaving precisely to the Sampler's expectations.

I won't spoil the ending, but there is an aspect to it that portrays the end of an instinctually driven reproductive cycle as a positive thing. The film gave me the impression that chastity is to be valued. I suppose my reaction would be somewhat like Nietzsche's reaction to Parsifal, which is to say that Upstream Colour is well made but, perhaps unknowingly, harbours a perspective antithetical to life. I think if they were alive to-day, Herman Melville and Edgar Allan Poe would be as inclined to be critical of a work like Carruth's as they were inclined to be critical of the Transcendentalists.