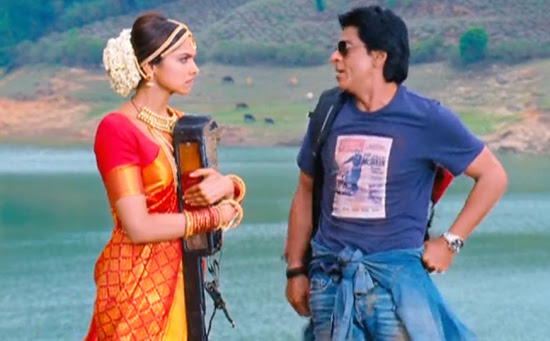 This year, the biggest movie star in the world for the past fifteen years or so, Shahrukh Khan, whose fans number in the billions (although most lists of the World's Biggest Actors you find through Google only track actors from American cinema), starred in the highest grossing Bollywood film of 2013, Chennai Express. As lightweight romantic comedy action films go, this one is especially and even slightly disturbingly lightweight but has enough genuine charm from its stars, real fun in its comedy, and beauty in its musical numbers to be a pleasant experience.

Khan plays Rahul, a spoiled rich kid who was raised by his grandparents after his parents died when he was very young. Despite this difference in his relationship with his parents, Rahul is kind of a hazier, watered down version of the character Khan played in Dilwale Dulhania Le Jayenge. He's not as incredibly abrasive to the female lead and his motives feel more arbitrary. He's basically playing a Shahrukh Khan type, a bit like the characters Cary Grant played later in his career.

After his grandfather dies watching a cricket match, Rahul is charged by his grandmother to take his ashes and release them into the sea in Rameswaram. However, Rahul decides instead to take the Chennai Express with the idea of meeting up with a couple buddies and going on vacation to Goa. The three of them reason the waters at Goa eventually meet up with those in Rameswaram anyway so it makes little difference if Rahul releases his grandfather's ashes in Goa instead. 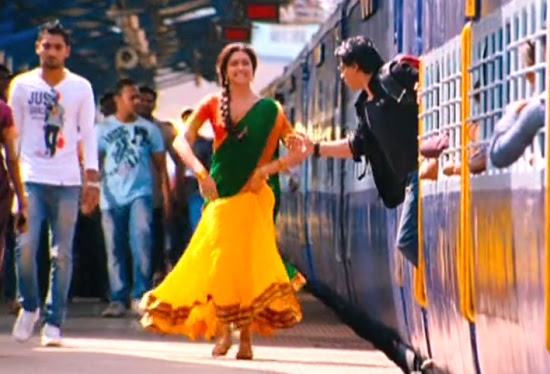 As Rahul's leaving the train with the ashes, though, he sees a beautiful woman, Meena (Deepika Padukone), rushing to catch the just departing train. He helps her onto the train and then, out of a sense of civility, helps up the four enormous men running after her, not realising until it's too late they were the kidnappers from whom she'd been running. 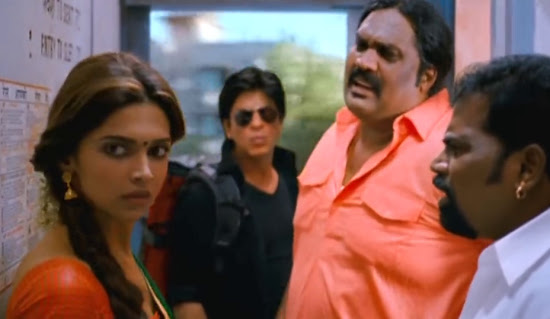 It turns out the men work for her father, a gang boss who controls a large part of South India. A lot of humour in the film comes out of the fact that Tamil is the predominant language in the area and Rahul only speaks Hindi and English. In the film's first musical number, Rahul and Meena sing in Hindi to each other, a pretty melody while their words are actually ideas on how to get past the Tamil speaking henchmen. 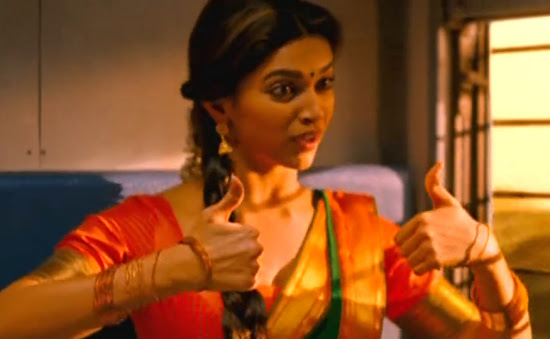 It's funny, though part of the melody seems to be borrowed from a famous song in Khan's early film Darr. From what I read now, it also includes snippets of various other Bollywood melodies as the South Indian woman parodies the Hindi musicals. It really barely qualifies as a musical number, which is disappointing because the film only includes four others, most of which occur after the intermission--the film has an intermission despite being only two hours and twenty minutes. The fewer musical numbers and the shorter running time both seem like signs of a disappointing Westernising of Bollywood films. But there's still plenty in this movie you don't see in Western cinema, at least not since the 50s.

The two are forced to flee from Meena's father and somehow end up in an impossibly picturesque village where everyone's main occupation seems to be arranging gorgeous, elaborate ceremonies for newlyweds in which Rahul and Meena are forced to participate in order to keep up the fiction that they're a married couple. The best musical sequence in the film happens here with the song "Titli".

Deepika Padukone holds her own well enough with Khan, giving an entertainingly goofy performance at the right points, though the motives behind their bickering feel rather thin and forced.

The movie ends up having a sort of incidental, positive take on the basically feudal system portrayed as existing in South India. Considering how impossibly ideal the movie makes things look, it's a bit disquieting if you think about it. But it's a relatively fun experience if you don't.

Posted by Setsuled at 1:50 PM
Email ThisBlogThis!Share to TwitterShare to FacebookShare to Pinterest