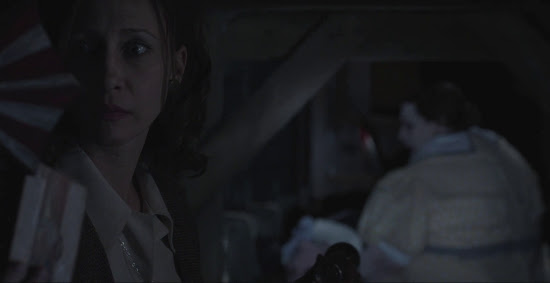 What's worse, demonic possession or a couple of insufferably smug ghost hunters? This is the question unwittingly posed by James Wan's The Conjuring, a badly written haunted house film based on a true story.

You can tell it's a movie made with the participation of one the two real life ghost hunters, Lorraine Warren, from the lobotomised, softball portrayal of the two characters who are paragons and not much else. I asked myself, if I can accept Gandalf's a wizard, why do I feel like I'm being insulted when this movie asks me to believe Ed (Patrick Wilson) and Lorraine (Vera Farmiga) are an exorcist and a clairvoyant, respectively?

Maybe it's the "true story" angle--after all, this film basically champions two con artists. But even taking that element out of it, the film portrays a world in which there is scepticism about Ed and Lorraine's powers but the only sceptic we actually meet is a cop who works with them (John Brotherton) who talks like a sitcom jock and humorously misleads everyone into thinking a ghost has opened a door in the house--it turns out to be him exiting the restroom.

In a way, though, the Warrens in their bizarrely unquestioned authority have more going on than the family living in the haunted house who are pretty much only distinguishable by height and gender.

Which, considering the kids are five daughters, makes things even harder. Huey, Dewey, and Louie are characters more distinct from one another. Though, of course, one of the younger girls, delivering the phoniest performance of the bunch, vaguely befriends one of the ghosts because this movie indulges in a string of cliches--I wouldn't say a trope can't work just because it's old. The child befriending a ghost worked remarkably well in the recent film Mama. But it's instructive to see how effectively that film conveyed a relationship between human and ghost and an evolution of personality for both characters based on the relationship. In The Conjuring, the only point to the relationship is to provide a premise for one of the film's many easy suddenly-jump-out-of-a-corner scares.

There are several ghosts, but the boss ghost is a witch who fled the Salem witch trials and hanged herself named Bathshiba. There appears to be no relevant resemblance to the biblical character.