Life is a Chain of Pints

What is the point of growing up? I mean, aside from raising the odds of your survival through responsible behaviour. But that's all out the window if the world's about to end, a scenario presented by Edgar Wright's very funny film The World's End. Mind you, the characters don't know for most of the film they're facing an apocalypse of any kind. But the contrast between living for the moment and worrying about the future is always present.

"Shall I not take mine ease in mine end?" said Falstaff in Henry IV part I--this quote used multiple times in Washington Irving's The Sketchbook of Geoffrey Crayon helped convey Irving's perspective on English inns and pubs being places of community and shelter for the imperfect and eminently human.

Despite their respective physical sizes, it's Simon Pegg and not Nick Frost who has the Falstaff role here in almost a direct reversal of roles from those the two actors played in Shaun of the Dead. The movie begins with Gary King (Pegg) in rehab telling a support group about a glorious pub crawl he and his friends had embarked upon twenty years earlier. It's then Gary realises that life hasn't gotten better since that day which is all the reason he needs to get the guys back together so they can do the same pub crawl, this time endeavouring to make it all the way to the final pub, The World's End, which they failed to do the first time. 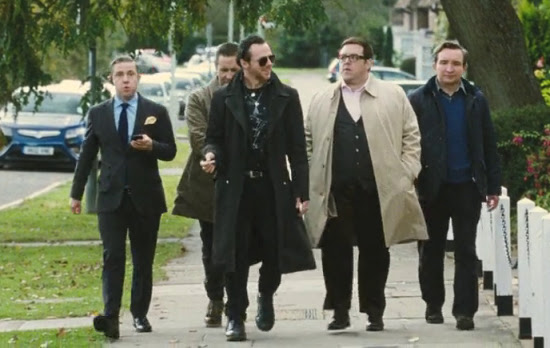 Of course, all the other guys (Nick Frost, Paddy Considine, Martin Freeman, and Eddie Marsan) have grown up and gotten responsible jobs, wives, kids and divorces. Gary tells them he might have a kid because an ex-girlfriend failed to get her period before she moved away to Normandy and he never heard from her again.

Gary has the same car he bought from Peter (Marsan) twenty years ago, the same tape in the deck Steven (Considine) had given him those years ago. 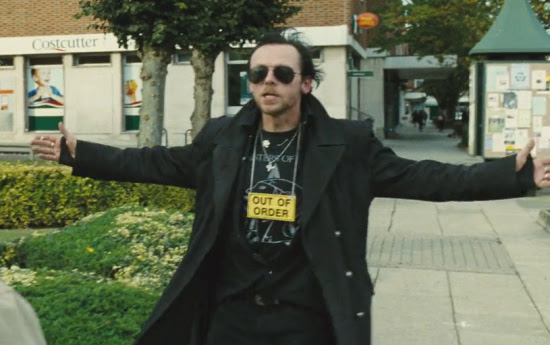 Gary has not moved on and he sees no reason to. Although he and Andy (Frost) have a lot of arguments about it it's not hard to see Gary's probably right--Andy's sterile office, marital troubles and smug teetotalling don't look too appealing in comparison.

I think the nature of how the world is ending is supposed to be a secret for anyone who hasn't seen the movie yet but I will say I was strongly reminded of a Doctor Who serial from Tom Baker's second season on the show.*

At Comic Con this year, I recorded video of Edgar Wright discussing what indeed turned out to be an exciting and funny action sequence in the film which he shot in one long take. In the video, he and Alfonso Cuaron (Marc Webb is also present) discuss the different advantages to be had from the long take than from quick cutting.

*Incidently, episodes of the new series are "episodes" not "serials" as I've seen them being erroneously referred to lately. A serial is a self contained story made up of multiple episodes while the new show tends to tell entire stories with single episodes.