In a way, it's perhaps fitting that a story of coveting material things should be degraded by greed. I wouldn't find The Hobbit: The Desolation of Smaug so frustrating, though, if there weren't things I really liked about it.

Just because it's a multimillion dollar production which media outlets have thrust in everyone's face all over the place doesn't mean I can't ignore it. The reason I can't simply write it off is because I love Ken Stott, Ian McKellen, Sylvester McCoy, Benedict Cumberbatch and, above all, Martin Freeman as Bilbo. I love the visuals, the production design and the costumes. And there are scenes from the book that are translated beautifully. I loved Mirkwood and the way Jackson showed how the forest was trying to infiltrate the minds of the hobbit and dwarves.

I love the spiders who are distinct from the very effective movie version of Shelob while also having the wonderful qualities and mannerisms of actual spiders. There's real character in the way these spiders are animated.

The animation for Smaug himself and Benedict Cumberbatch's performance are beyond spot on. It is the vain and clever, immense and terrifying being from the book. It's a shame his menace is undercut by a lengthy action sequence where the dwarves and hobbit narrowly escape his jaws about a million times by way of physical comedy before the dwarves use an absurdly elaborate tactic against him along with some tedious grandstanding by Thorin (Richard Armitage).

Thorin, in the book, is a dwarf whose pride is a failing and I suspect it'll be portrayed that way in the next film. But going face to face with a dragon not only diminishes the threat of the dragon it also comes in the way of the charming little tale of a bunch of vagabonds who would-be rulers.

The book isn't just about how Bilbo, a small and meek creature, can alter the scope of so many destinies. It's about how minds like those of Thorin or Smaug or the Master of Laketown (played nicely by Stephen Fry) are inherently no greater than that of Bilbo for all the pomp surrounding them.

Oh, Bilbo is so buried under a pile of action. His courageous and amusingly cocky confrontation with the dragon is turned into something that barely makes sense as he stutters his boasts to Smaug without even wearing the ring. The most significant character moments for Bilbo in this movie come when he battles ring-addiction, something only just barely suggested in the book. Here it's part of the big, underlying problem with these films--Jackson is trying too hard to make The Lord of the Rings again. 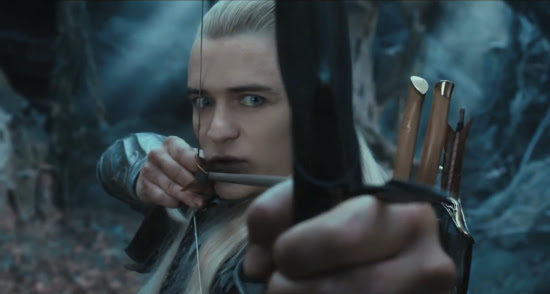 The film might have been called The Hobbit: Elven Martial Arts as the character of Legolas not only appears in the film but vast quantities of time are spent watching him beating orcs with impressively acrobatic technique. Why have dwarves in barrels going down the river when you can have them fighting orcs at the same time while elves are thrown into the mix defending them? That seems to be the question Jackson asked himself. He seems to have completely forgotten or doesn't know that the more you throw in narrow escapes the less we're inclined to believe them.

Legolas becomes part of a love triangle involving Kili (Aidan Turner) and the female elven archer created for the film, Tauriel (Evangeline Lilly). Fundamental to their story are ideas of racial and caste prejudice. Thranduil (Lee Pace), the father of Legolas and king of the Mirkwood elves, doesn't approve of his son's affections for Tauriel and Legolas doesn't approve of her budding affections for a lowly dwarf. Kili, meanwhile, in kind of a sweet scene compares her to the starlight elves love--beautiful but remote and cold.

See, I'm not opposed to Jackson filming a story like that. It actually is rather in the spirit of what Tolkien wrote. But if I had to choose between it and The Hobbit, I'd still take The Hobbit. And for some reason I was under the impression that that's what I was supposed to be getting with these movies.

As usual, the dialogue is best when they stick to Tolkien, too. I just reread the climactic scenes about the dragon from The Hobbit--I didn't notice the word "burn" once yet I heard it at least five times in the movie used with significant emphasis. In fact, I've been hearing it quite a lot since Michael Caine very effectively delivered it in The Dark Knight. Now I think it's had its day and I'd like to implore screenwriters to find other words. Maybe immolate, incinerate, scorch, be consumed by flame. Give some of those a shot, please.

Posted by Setsuled at 1:56 PM
Email ThisBlogThis!Share to TwitterShare to FacebookShare to Pinterest