The difference between who someone is and the role he or she is forced to assume by loved ones or society has been a common theme in Japanese film and television for a long time. Makoto Shinkai's The Garden of Words (言の葉の庭 Kotonoha no Niwa) is a beautiful film that deals with this theme primarily through impressions of physical sensation. The story itself is almost ancillary but it does support the film's less literal heart.

Primarily the film explores how the world feels transformed on a rainy day. And how it feels smaller and sharper. The title of the film suggests a story involving language, literature, or dialogue. Although one of the two main characters is a literature professor, the film is still more closely connected to visual art. 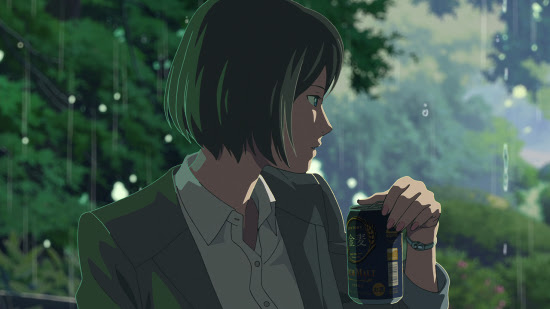 But Yukari, the teacher, does recite a poem, a tanka, a form of Japanese poetry, to Takao on their first of many meetings during the rainy season in an otherwise deserted park. It was translated in the version I watched without attempt to replicate the metre: 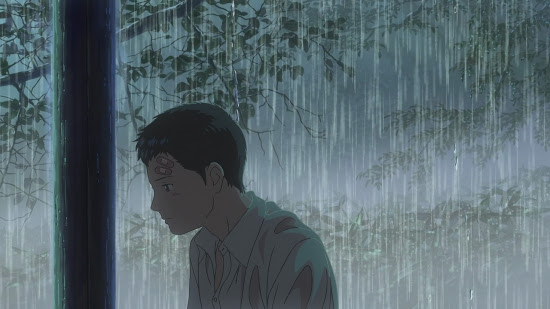 Takao doesn't know she's a teacher when they first meet but she knows he's a high school freshman because he tells her he'll only skip class to meet her on rainy days. Before they meet, at the very beginning of the film, he talks in voiceover narration about how the sky had seemed "closer" before he started taking the train into the city to go to high school. This idea of the world being uncomfortably big now is reflected in the anonymity the two characters maintain in their regular park meetings. He can see she's a professional woman, coming from a world he doesn't understand and confesses being somewhat frightened of. But within this sharp, isolated microcosm, they're free of the identities they're supposed to maintain and are allowed to be a boy and a girl who care for each other. 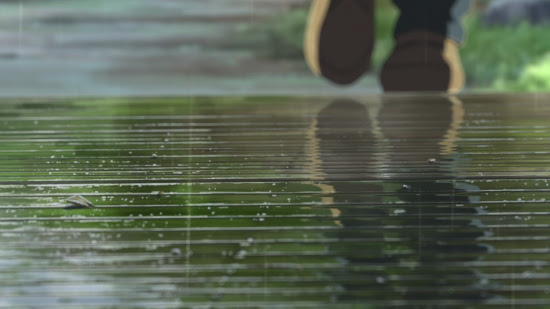 The contrast between depictions of rainy days and sunny days in the film is in the attention to detail--on rainy days, we see many shots of raindrops on a wooden bridge, tiny bugs on the surface of the lake, leaves and flowers. Takao confides in her his secret dream of having a career as a cobbler and one scene where he takes measurements of her feet nicely brings to together the small tactile impressions from his hands touching her foot with their motives in the encounters. This harmonises with the idea of the rainy days being composed of isolated, tiny details. 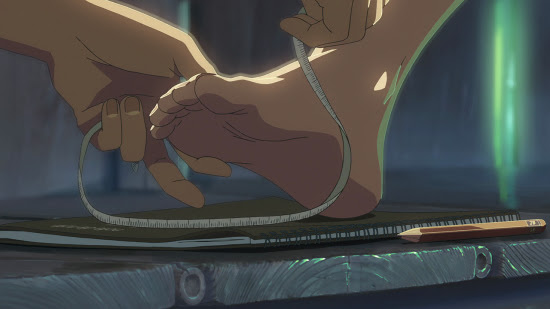 Reflected light also helps with the impression as the colourists take great care to show the green of the foliage reflected on the bodies and clothing of the two characters. 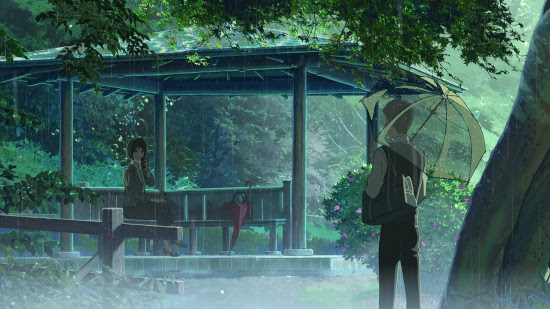 This both emphasises the lushness of detail, the fundamental difference between the reality of a rainy day and a sunny day, and the intimate closeness of their environment, this sort of pocket reality.

Posted by Setsuled at 3:48 PM
Email ThisBlogThis!Share to TwitterShare to FacebookShare to Pinterest