Messages On the Water 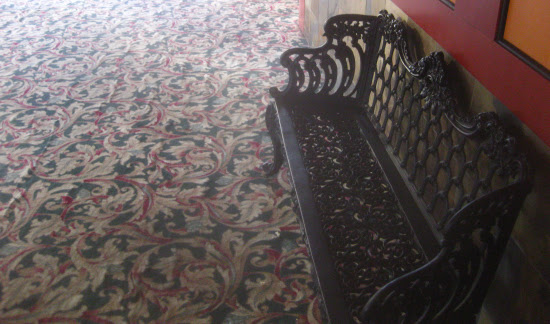 This is not a great picture of one of nice looking wrought iron benches at the movie theatre where I saw The Counsellor Thursday. I didn't get a good shot because I got nervous about being seen with a camera in a movie theatre.

I got to the theatre thirty minutes early so I sat on one of these benches and finished reading The Drowning Girl: A Memoir by Caitlín R. Kiernan. A wonderful book and, as it turned out, containing themes not dissimilar to those in the movie I saw. The line about the drug cartel gangsters, "They don't believe in coincidences. They've heard of them, they've just never seen one," could be said of India "Imp" Phelps, the narrator and protagonist of The Drowning Girl. She's an unreliable narrator reminiscent of Merricat from Shirley Jackson's We Have Always Lived in the Castle. India sees patterns and significant recurrences all the time and she presents her questionable observations to the reader frankly, without hesitation.

Talking of coincidences--or significant patterns in the world--the latter section of the book features the poem "Dover Beach" by Matthew Arnold which also figured very significantly in another novel I read this year, Saturday by Ian McEwan.

The sea is calm tonight.
The tide is full, the moon lies fair
Upon the straits; on the French coast the light
Gleams and is gone; the cliffs of England stand,
Glimmering and vast, out in the tranquil bay.
Come to the window, sweet is the night-air!
Only, from the long line of spray
Where the sea meets the moon-blanched land,
Listen! you hear the grating roar
Of pebbles which the waves draw back, and fling,
At their return, up the high strand,
Begin, and cease, and then again begin,
With tremulous cadence slow, and bring
The eternal note of sadness in.

Sophocles long ago
Heard it on the Ægean, and it brought
Into his mind the turbid ebb and flow
Of human misery; we
Find also in the sound a thought,
Hearing it by this distant northern sea.

The Sea of Faith
Was once, too, at the full, and round earth’s shore
Lay like the folds of a bright girdle furled.
But now I only hear
Its melancholy, long, withdrawing roar,
Retreating, to the breath
Of the night-wind, down the vast edges drear
And naked shingles of the world.

Ah, love, let us be true
To one another! for the world, which seems
To lie before us like a land of dreams,
So various, so beautiful, so new,
Hath really neither joy, nor love, nor light,
Nor certitude, nor peace, nor help for pain;
And we are here as on a darkling plain
Swept with confused alarms of struggle and flight,
Where ignorant armies clash by night.

I find myself compelled to compare how the poem was used in the two books. McEwan's book is about the death of imagination in modern society and an attendant erosion of common decency. But it's also about how great art can still, ultimately, redeem us and specifically Arnold's poem. Caitlin's book could almost be said to be the opposite. She refers repeatedly to a line from Radiohead's "There There (The Boney King of Nowhere)"--

There's always a siren singing you to shipwreck.

This seems to be how India cautions herself against seeing or believing things that aren't real. Art in this book is a hazardous thing, a stimulus with a potential to exacerbate harmful obsessions.

Saturday is also more Apollonian and The Drowning Girl is more Dionysian. Caitlin refers to the novel as autobiographical which possibly is why it's been called post-modern. In the book's seventh chapter, India accuses herself of hiding truth from herself by using alternate names in her writing but there's never a moment where she actually calls herself "Caitlin". So the book is actually saved from being post-modern. Some may dispute my implication that fiction ought to be saved from post-modernism. Well, look at this case. Unless you know Caitlin, what would be gained by breaking the fourth wall in such a literal way? And if you do know her, you probably know enough to know there is a lot in The Drowning Girl that reflects her own life. So being so direct would be redundant.

In real life, a woman Caitlin loved committed suicide. The nearest analogy one might see to that person is the character of Eva Canning in the book, though, even knowing little about the actual person in Caitlin's life I can see that there's not a precise allegory here. My suspicion--and I'm only guessing--is that Caitlin distributed feelings and characteristics differently among her three main characters--Abalyn, India, and Eva--so that no one character is an exact counterpart of a real person but the three nonetheless confront similar issues with some new perspective for the new juxtapositions. This may account for India's apparent suicide attempt in the story and the perspective from India on how Abalyn reacts.

I've already written two long entries about the The Drowning Girl--first this one where I discussed Drowning Girls as a trope in fiction and what they might generally mean and this one where I found similarities between the book and Alfred Hitchcock's Vertigo. Caitlin's told me she's never seen Vertigo all the way through so the similarities would seem to be coincidence. But having finished the book now I can say the resemblance is never extinguished. They are indeed both works about a protagonist whose delusions related to a mysterious and ghostly woman go to the brink of doom. Though one could say The Drowning Girl ultimately has a more hopeful message about accepting and coexisting with illusion.

As for the Drowning Girl as trope, one could certainly see the dissolution of identity present that I'd talked about as having seen as being fundamental to the trope. Though certainly from a unique angle compared to the other examples I mentioned--what we learn of Eva Canning comes from the most unreliable states of the generally unreliable narrator, India. So one might see the persona of Eva as being as much an aspect of India's personality as anyone else's. The idea of there being two Evas and the idea that one might have changed to be more like the other--certainly we're talking about dissolution of identity underlined especially strongly by a specific occurrence of a Drowning Girl (I'm being vague to avoid spoilers).

It's a lovely book about different human minds and the difficulties they have interacting. It's about the beauty and danger of fallible perceptions and how difficult it can be to reach through them sometimes to the people we love.