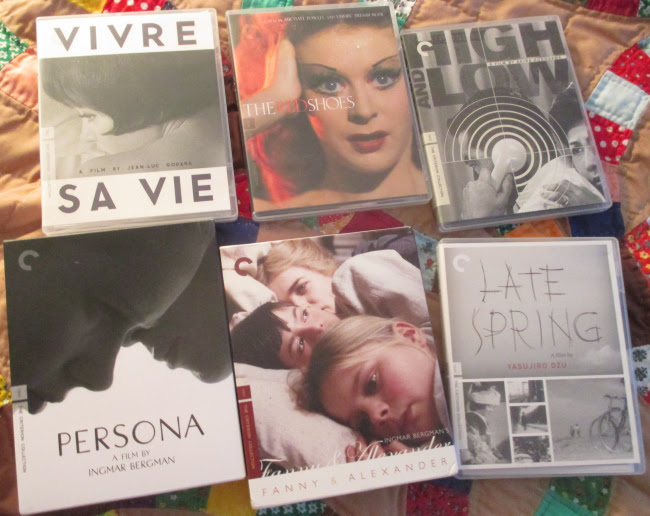 There was a 50% off sale on Criterion movies at Barnes and Noble yesterday, plus another 10% off for members of the store club, so I exercised a little less restraint than I usually do. Not just because it was such a good sale but also because I saw this in the last Barnes and Noble in San Diego county that sells movies two days after I'd noticed Fry's Electronics had done away with their Criterion section. The End, for being able to buy many Criterion films in stores, is nigh, I think. I suspect they'll do the same thing to the movie and music section in the Barnes and Noble that they've done to the other movie and music sections in other Barnes and Nobles--turn it into a second kid's books section, to supplement the one they all already have. Kids are for the most part seemingly the only ones left tickled by the novelty of actually going somewhere and holding something in your hand before you buy it.

Those are all blu-rays I bought, it's nice to see Criterion isn't giving in to the seemingly requisite blue band on the top that makes many an otherwise beautiful example of box art look cheap and ugly. Criterion, as usual, makes the best package art, though I preferred the old DVD clamshell art for The Red Shoes of a drawing of a ballet slipper and the cover of Late Spring really ought to have a larger, more prominent picture of Setsuko Hara.

I'm still amazed I managed to restrain myself from getting the new Picnic at Hanging Rock big box set. I had to cut myself off or I'd be living in an alley under a crude shelter made of blu-rays and cases.