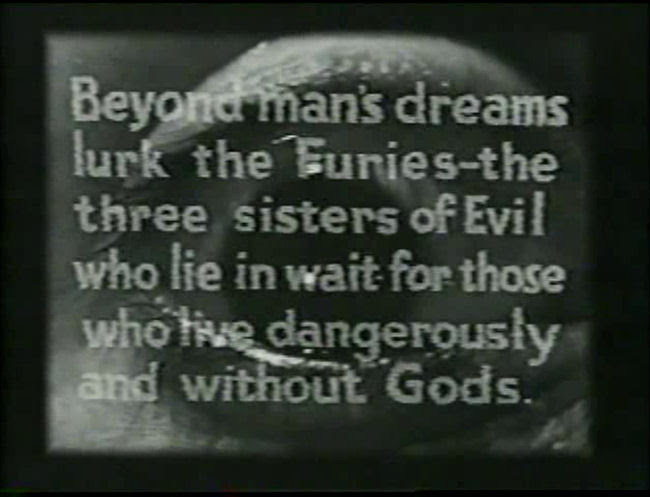 Morality is a dream and a nightmare, a promise of justice and a cunning trap. Ben Hecht and Charles MacArthur's 1934 film Crime Without Passion is an anomaly in a lot of ways. It has the suffocating snare of guilt inspired by popular morality characteristic of film noir years before the first films noir are generally considered to have emerged; it combines fantasy, surrealism, mystery, and courtroom drama. It's fascinating, audacious, and brilliant.

Despite a title card at the beginning informing us the film passed the motion picture code, and it was released just two months after the code essentially became law in July, 1934, the film features several things that would be absent from Production Code era Hollywood. The nightmarish opening sequence, which Leonard Maltin in his brief review of the film at TCM.com says was directed by Slavko Vorkapich, features footage of three essentially naked women portraying the mythological Furies, in process shots sprouting from the blood of victims of violent crimes. 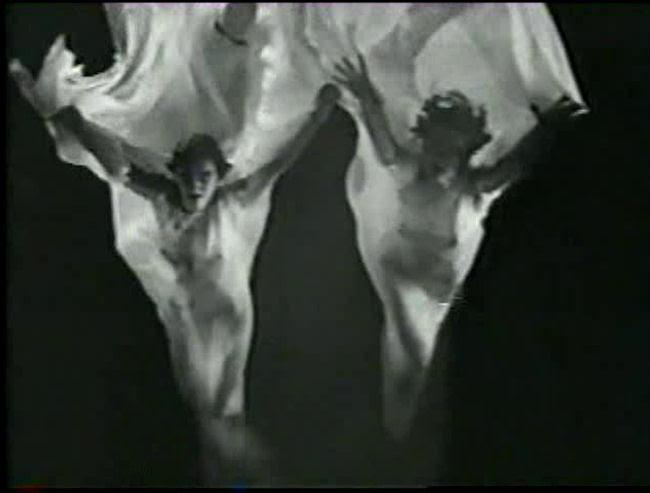 Brief shots of crimes being carried out are interspersed with rapid cuts to the Furies and human skulls laughing or perhaps snarling, the whole sequence something that would have seemed at home in a Carl Dreyer or Luis Brunuel film. 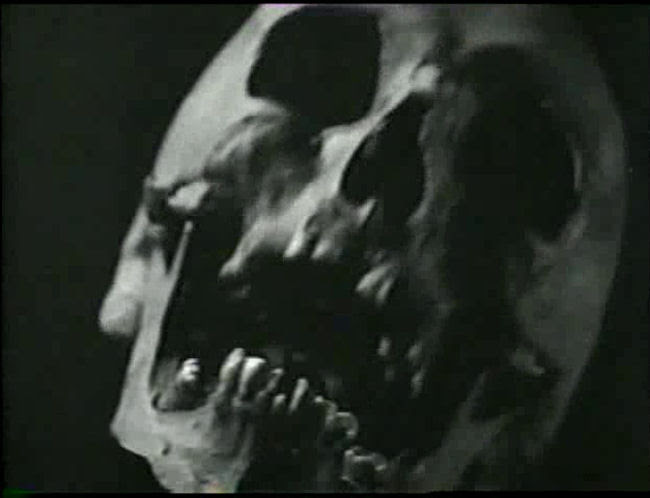 From this sequence, we go to the offices of criminal defence lawyer Lee Gentry, high above the city where he looks down at the people in the street and wonders how all those people can bear to continue living in this horrible world. It's a strange scene of introspection for a character mostly portrayed as a ruthless, diabolical advocate for villains. In the same scene, his secretary actually tells him he's "too nice" as he describes the difficulty he has breaking up with his girlfriend. He thanks his secretary but says, "Fortunately for yourself, I've never been in love with you. In love, I am a monster." 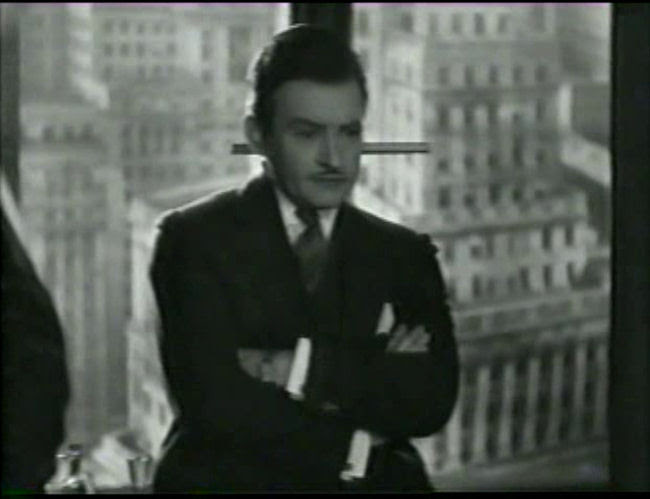 He says the normal acts of affection like hand-holding and kissing aren't enough--he wants to become intimate with the personalities of the women he loves so, he says, when he loses interest the women seem to feel like wives whose husbands are leaving them. Claude Rains plays Gentry and he does a brilliant job in many scenes, like this one, where his character would seem to be presented as a kind of two dimensional villain that would satisfy the Hays office and yet, to anyone with a slightly more complex view of human nature, Gentry is a man who punishes himself with an unfair self-image and it's this unfair self-image that leads him to make mistakes later on. 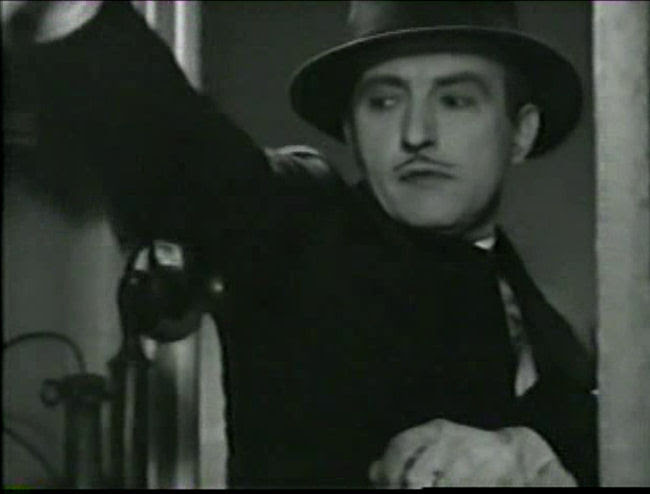 The press and law enforcement blame him for getting criminals off the hook in the courtroom and yet the film crucially never explicitly says any of Gentry's clients are actually guilty. Meanwhile, later in the film a man is clearly condemned by false notions on the part of law enforcement, but because the film on its most superficial layer had set up that character as a villain, his punishment by law enforcement is portrayed as right, the vengeance of the Furies in a very subtle mockery of code morality. 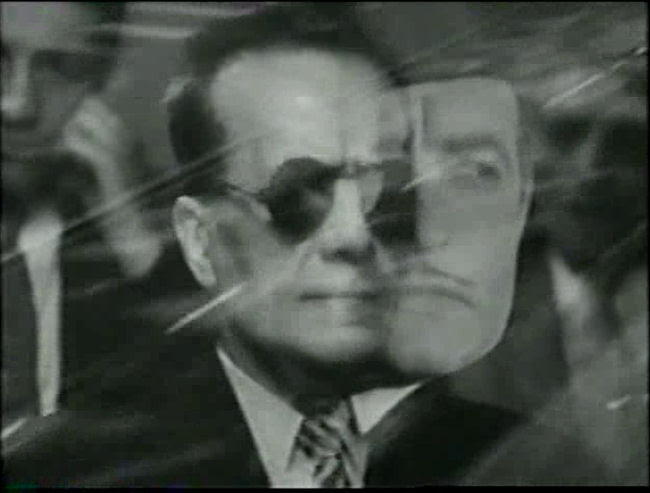 In a really amazing tangle of moral layers, Gentry is made afraid of capture himself for the murder of a woman he had in fact been trying to save from suicide. When he finds himself alone with her on the floor, a gunshot wound in her head and he holding the gun, he actually splits into two characters, a panicking corporeal Gentry and a smiling and cool translucent Gentry who, like a devil on his shoulder, walks him through the careful steps of removing pieces of evidence from the crime scene. 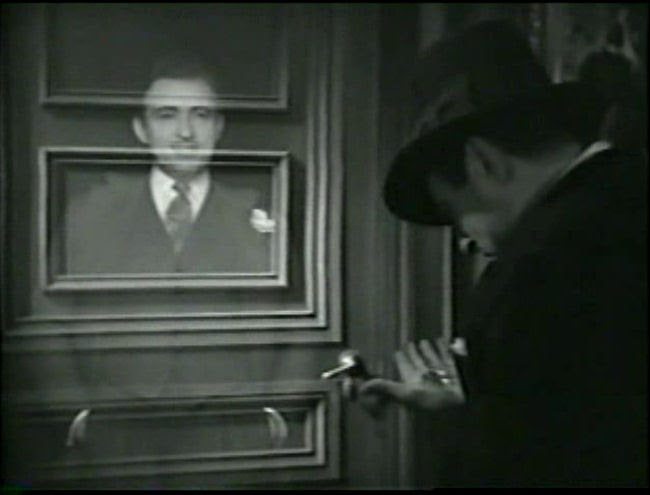 The ghostly Gentry is his courtroom persona, the devil created as much by the press and the cops who hate him as he is by Gentry himself. Or rather, and this is really great, its Gentry's perception of their perception. This very nice man is on some level ashamed of this image and yet he also tries to own it, to take pride in it. Rains shows this by giving the persona an even more broadly villainous air than Prince John in The Adventures of Robin Hood. 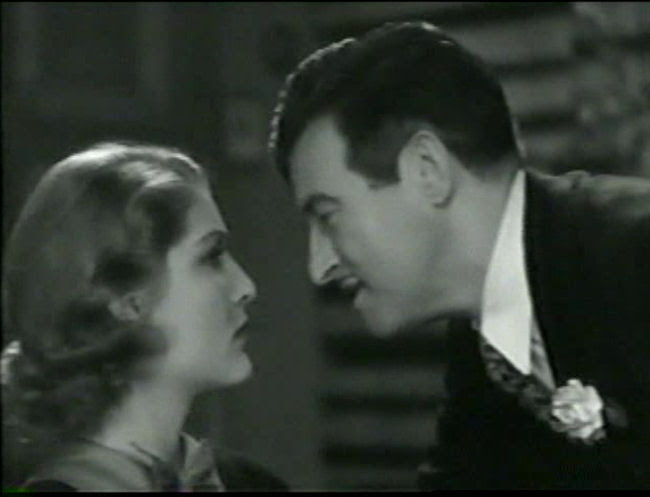 As fate creates a path for Gentry that brings his psyche to a breaking point he actually even mentions the Furies in dialogue. This broad, unforgiving morality of America, this frantic and relentless drive to figure out a Right that no-one knows while being afraid that other people know. The twisted nature of morality that films noir would brilliantly undermine for decades to come.