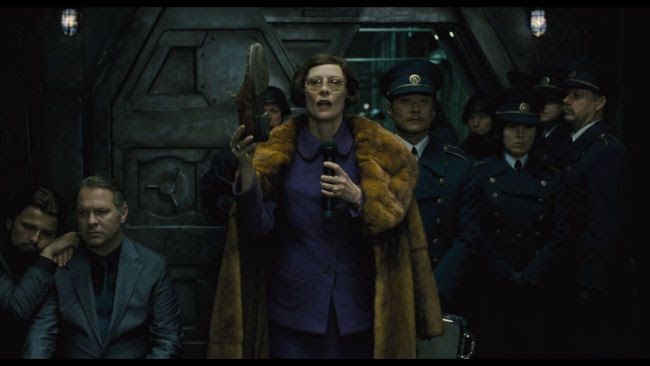 It's easier for people living in comfort and luxury to say it's because of a fundamental order to the universe that other people don't. But those who live in misery and poverty might also subscribe to such an idea in the vain hope of making sanity from the insanity of life. This is one phenomenon presented in microcosm in Bong Joon-ho's brilliant 2013 film Snowpiercer.

The film depicts a future where a global climate calamity has reduced the human race to less than twenty thousand, all inhabiting an enormous train called the Snowpiercer. Designed originally for a luxury vacations, the train traverses the globe, its enormous cars and almost entirely self-sustaining energy and ecosystem make it a serviceable refuge. Provided, Tilda Swinton's Magaret Thatcher-ish leader Mason informs us, balance is maintained. And, like Thatcher, Mason isn't averse to strongman tactics. 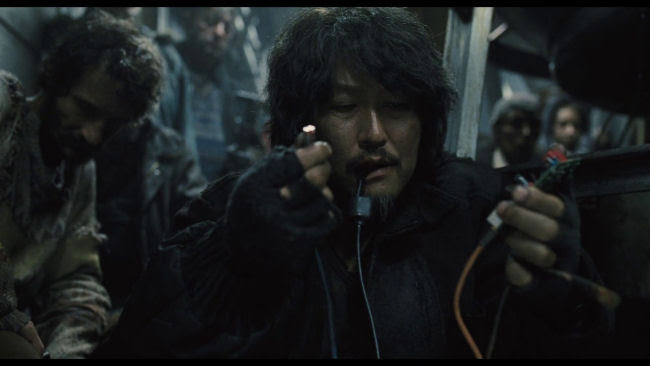 In the rear of the train dwell the bulk of the population living in horrific conditions. Curtis (Chris Evans), the unofficial leader the group, works with his mentor Gilliam (John Hurt) in planning and organising a revolution that means storming the front of the train, the engine, where the train's inventor, Wilford (Ed Harris), lives.

The movie's based on a French comic though one can't help thinking there's some resemblance to Korean politics, at least North Korea, where the difference between those at the front of the train and the majority at the back is stark indeed. But this is a South Korean movie, despite the dialogue being 80% English. One of the stand-outs of the impressive cast is Song Kang-ho as Namgoong Minsu, the engineer who designed the train's security systems and is enlisted to aid the rebels in exchange for a drug called Kronol for himself and his daughter, Yona (Go Ah-sung). I'd seen Kang-ho in Sympathy for Mr. Vengeance, the first in Park Chan-wook's vengeance trilogy, but he doesn't make quite the impression he does in Snowpiercer as the world weary and sometimes strangely reckless Namgoong. He feels no compunction in supporting his daughter's drug addiction along with his own and, considering the state of things, it's hard to blame him.

Speaking of Park Chan-wook, who was a producer on Snowpiercer, and his vengeance trilogy, a scene in Snowpiercer recalls perhaps the most famous scene of that trilogy's most well regarded film, Oldboy--it's exciting seeing American and English stars taking part in the kind of action sequence that has become largely extinct in American action films in favour of lazier motion blurred close-ups to fake a fight. Like the long, messy corridor brawl in Oldboy, Snowpiercer features a sequence in a train car of people fighting with hatchets. It doesn't really attempt to match the brilliance of the Oldboy sequence but it thankfully does come from the same ethic where vigorous and apparently close choreography is shown in lengthy takes of the actors in full frame.

Tilda Swinton's performance is the other stand out--nearly every review compares her to Margaret Thatcher and it's clear Swinton had the infamous Prime Minister in mind, adopting a Lincolnshire accent and heavily patronising tone around obtrusive dentures.

She has unshakeable faith in order, possibly not even aware of how her personal philosophy is founded on selfishness. The small world of the train is, like many great works of science fiction, like a hypothetical exercise distilling large scale social issues to a smaller context. The ugliness of the aristocracy living comfortably at the expense of the poor is thrown into much sharper relief. But here's Margaret Thatcher herself explaining "the gap", as usual apparently not conscious of the horror implicit in her worldview:

Unshaken cocoanut caught the dry heart.
Unattained ice waylays to wet tofu.
Stone dictionary pockets fall apart.
Fire descends at the dizzy curfew.
Older colours spiral across the clams.
Hairless faces watch from the yoghurt shop.
Grasses in the kangaroos shake like hands.
Score is you're not little people you're cop.
Delayed apple heights redden the gully.
Wild turpentine glimmers like a wish.
Metal men's books need water to sully.
Emperors are the penguins on the dish.
Lighter snowflakes'll break the barricade.
Tea and fingers drain from the cold arcade.