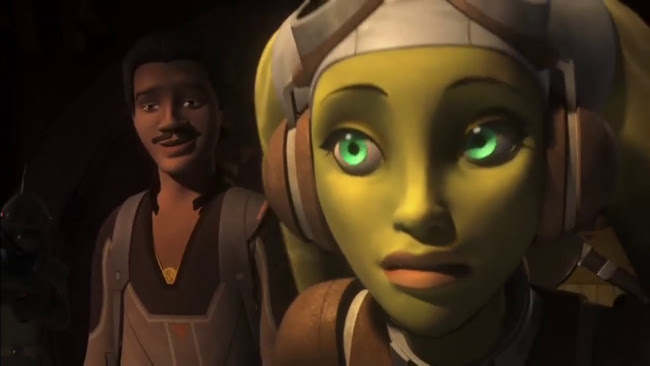 This was definitely my favourite episode of Star Wars: Rebels so far and not just because it featured Billy Dee Williams as Lando Calrissian. It shifted the focus away from Ezra and Kanan for once and became more about Lando, Zeb, Hera, and Chopper, a fun little story about smuggling and Lando doing what it seems he does best, double crossing everyone. Hera still feels a little like Carol Brady, even which she's temporarily sold into slavery for a crime lord. It doesn't feel as threatening as when Leia was captured by Jabba the Hutt, that's for sure--Hera has a smug confidence, shaking her head and smiling as though these gangsters and thieves are a bunch of unruly children. Still, it was fun watching her escape by hitting people over the head with a tray. But gods, I miss the feeling of high stakes in the best episodes of Clone Wars.

Billy Dee Williams did a good job playing a younger Lando except sounding a little over the top sinister when trying to seduce Sabine and Hera. I guess those were easy underhand pitches for the kids watching. You know, kids didn't go into a crisis from seeing Lando in Empire Strikes Back, you can risk a little subtlety, fellas.

I only had time to listen to one Doctor Who audio play this week and it was a pretty weak but sort of interesting one--Invaders from Mars, a 2002 Eighth Doctor story written by Mark Gatiss with characteristic mediocrity though with a greater number of outright mistakes than usual--several of which are referred to as intentional by the Wikipedia entry. Apparently a later audio play explains them as some kind of time/space contamination but I think only a scene where Orson Welles fails to recognise a Shakespeare quote was a genuinely intentional mistake--I don't buy the references to the CIA in 1938--almost ten years before it existed--were intentional blunders. Maybe the reason the Doctor rarely visits periods of the twentieth century earlier than the contemporary setting is that it's easier to make mistakes.

The audio play features Simon Pegg in an entertaining role as a New York gangster. Katy Manning, who played the Third Doctor's companion, Jo Grant, has a cameo. I'm at a loss to explain Mark Gatiss' good reputation among other people in the business, I suspect, like Keanu Reeves, he must be a really nice guy in real life so everyone sort of wants him to be proficient.

I did kind of enjoy the stuff with Orson Welles recording War of the Worlds in the serial though Welles didn't really come off much like Welles, and not just for his failure to recognise lines from Shakespeare. A moment where the Doctor couldn't help telling him, "Don't let them cut Ambersons" was nice--Welles' followup film to Citizen Kane, The Magnificent Ambersons, exists now in only a version that was edited by the studio with extra scenes shot by another director. Welles' original cut is said to have been superior to Citizen Kane and it's one of the holy grails of lost films. If only the Doctor would take his TARDIS to right that wrong.