The Books Will be Read if They Exist 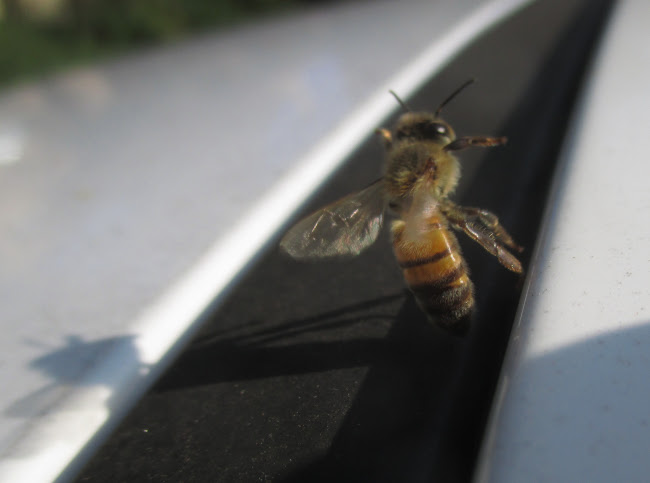 Yet another bee on my car, this one hoppin', seemingly too tired to fly. I guess I can't blame the attraction my car holds for bees on my colourful dashboard sun shade--it wasn't up at the time. This was just outside my college where I went to-day to get my text book for the Conversational Japanese class I start next week. While I was there, I stopped in the college library to do some research for my next comic which is going to be partially set in western Africa in the seventeenth century, a subject I'm having difficulty not only finding information about but also consistent information about. I've looked at one book that tells me the monarchy centred authority of the old Benin kingdom Dahomey was rare, and then another book that tells me that every society in western Africa was always based around monarchy.

I've gone through a good pile of books now but I still haven't found a book that just tells me what day to day life was like. An irritating number of books are little more than lists of wars. But I did find a couple useful books to-day that at least told me about the caste systems of the societies I'm interested in. If anyone wants to recommend books or movies to me, particularly about the areas now contained in Nigeria, Ghana, and Benin, feel free to do so. But if you're just going to say, "Have you heard of the Ashanti?" you can assume I have the basic information. I'm looking for real in depth stuff.

So far the best book I've found is outside the area I'm looking for--a book written in the early 60s by the British anthropologist Colin Turnbull, The Forest People, which details his experiences living among the Mbuti pygmies. He paints a portrait of the people has he knew them, talks about how they interacted with each other, how they built their temporary villages, how their spiritual beliefs operated in their normal lives. If I could just find more books like this.