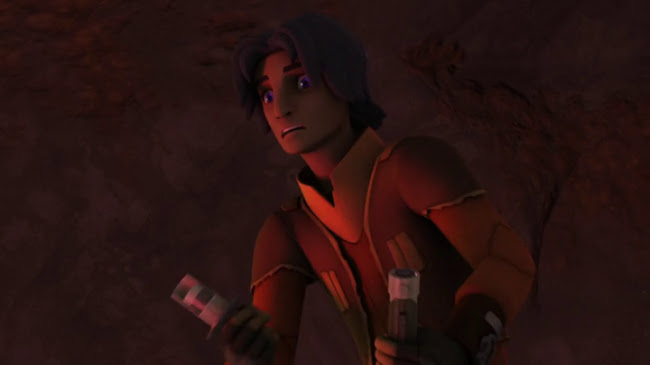 Well, Star Wars: Rebels is back, I watched the new episode a few days ago and I'm tired of the show basically being an inferior retelling of Luke Skywalker's story. This new episode features Kanan taking Ezra to an abandoned Jedi temple for the self-confrontation Luke faced in Empire Strikes Back. Frank Oz even guest stars as Yoda in the episode. It is nice hearing a kids' show saying how helping others is a worthier motive than revenge but I don't understand why they have to write Kanan as so irritable. It's an irony that was in the prequels, too--a Jedi master furiously explaining over and over how Jedi mustn't give in to anger. Oz's performance actually makes things a little interesting but mostly it's trite passing as profound.

I listened to two Doctor Who audio plays this past week--a rather good one, Primeval, and an unexceptional but still better than I expected one, The One Doctor, both stories from late 2001.

Primeval is a Fifth Doctor story in which the Doctor and Nyssa return to Nyssa's homeworld of Traken--introduced in the Fourth Doctor television story Keeper of Traken. Certainly one of the most beautifully designed locations visited in the history of Who, the two visit Traken at an earlier point its history and we're shown how Traken's strange religion and culture of enforced perfect innocence began with a completely secular society creating a machine to take care of everything. There's a lot of business about Nyssa in a swimsuit and it's continually amusing how the radio plays feel compelled to feature scantily clad women but are forced to do so through verbal descriptions.

I thought the Doctor's arguments with Traken authorities about how evil is relative was interesting and the story features plenty of inventive escapes and confrontations. I loved the fact that the Doctor makes a rather enormous mistake.

I was very reluctant to listen to The One Doctor as it features my least favourite Doctor--the Sixth--and my second least favourite companion--Mel--in a story that's almost complete parody. But it actually turned out to be pretty funny. Maybe the whisky I was drinking helped. It involves a con artist posing as the Doctor and another as his accomplice/companion "Sally-Anne Stubbins". I had to smile at their "STARDIS" resembling a portable toilet. There's some insightful digs at the way Doctor Who is usually written including a monstrous blob alien who immediately complies with the Doctor's request because he "has an honest face". The story also featured a pretty amusing Weakest Link plot element where the Doctor finds himself on a future version of the game show--apparently it was the inspiration for Rose Tyler being on The Weakest Link in the television episode "Bad Wolf". Though the Wikipedia entry for the episode says, "The concept of the Anne Droid and a futuristic version of The Weakest Link was pitched by Russell T Davies in his second meeting with the BBC about bringing back Doctor Who in 2000 or 2001." Maybe the segment in the audio play was sort of a test to see how such an idea would play but I think it's more likely that, like The Fires of Vulcan, The Stones of Venice, this is yet another example of television mining radio for ideas. Which I think is fine though I wish there was consistent honesty about it. I also think the Weakest Link thing works better in the context of The One Doctor which is essentially a parody story from beginning to end while it sits a little oddly in "Bad Wolf" which was at the same time supposed to be a culmination of the whole mysterious and sinister season long Bad Wolf element.