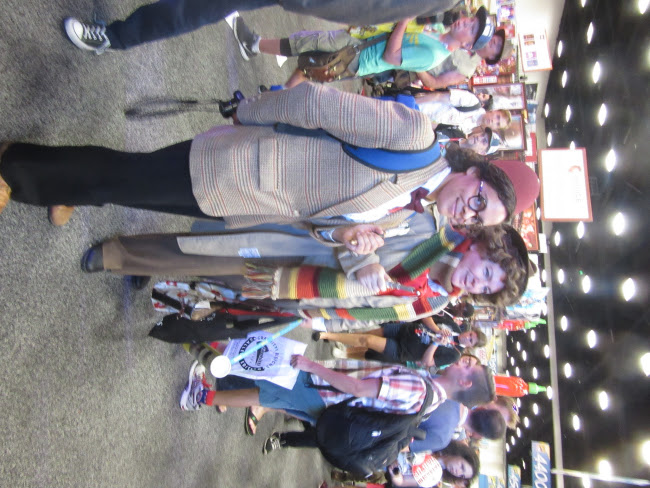 Eleven and Four, by far the most well represented Doctors at Comic Con, year after year, though this year was the first time I saw them to the almost total exclusion of all other Doctors. Maybe it's because an Eleven costume is generally considered to consist of no more than a bow tie and a coat and maybe a fez. Any outfit which features those first two, I think, is taken as some variation on Eleven which, I think, is probably why this was the first year people were actually taking pictures of me. I wore a bow tie every day except Saturday and it was constantly mistaken for Doctor Who cosplay. Not that I minded. Incidentally, if anyone sees photos of me online, let me know--the experience certainly made me more sensitive to the needs of cosplayers and I started handing out my card to each person I took a picture of, saying I'll be posting pictures this week.

So, for me, it's over, though technically the event hall hasn't even closed yet to-day. But there was nothing more I wanted to see so I figured I'd beat the packed sardines phase of trolley travel and get home early. I'm sorry the Con is over but my feet couldn't be happier. Since I got home to-day, I squeezed myself some fresh grapefruit juice then just sat and stared into space, savouring the feeling of not having anything to do or see. 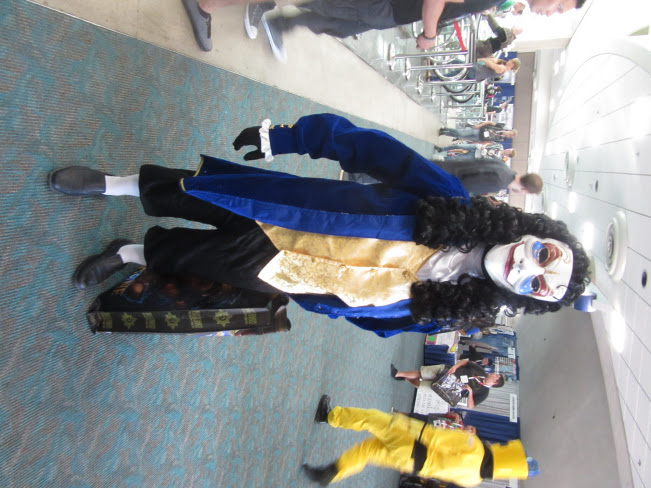 Since I missed my weekly Doctor Who blog post on Saturday, I figure I'll start by talking about all the Doctor Who stuff I saw. I did get into the Doctor Who panel in Hall H, surprisingly, since I only got in queue two and a half hours before it started. Which made me wonder gloomily if this was a reflection on the Twelfth Doctor's unpopularity. Indeed, keeping an eye out for Twelfth Doctor cosplay I saw one, just one, guy dressed as Twelve. 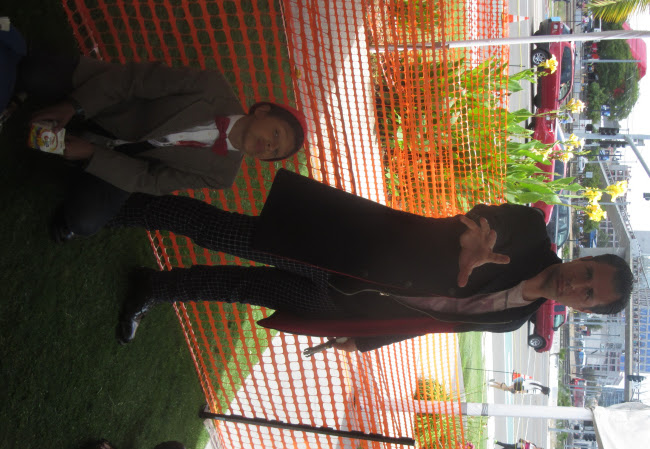 Though, as Peter Capaldi said on the panel, rather nicely, the Doctor is not "a guy" by which he meant a Time Lord is something far too unfamiliar to be given such a common term. It clearly reflected Capaldi's impression of the character since he started watching the show when he was six but, more than that, it seemed to me an outgrowth of old fashioned, pre-punk conceptions of peerage. While actual royalty and nobility may not deserve that mystique, I rather love the idea that the Doctor might fill that particular space in the human imagination.

Usually at any panel, I find the writer or sometimes a director has the most interesting things to say, naturally, I suppose. It's particularly true with the ever witty Steven Moffat but I felt Capaldi actually took charge of this panel. The chemistry between him and Jenna Coleman, too, seemed very real and very sweet. Michelle Gomez seemed high. She became very upset when she thought someone said, "That's odd," after she'd joked that she was holding Clara's hand in one take when she kissed the Doctor. "No, that's not odd!" said Gomez. "I think she said, 'That's hot'" said moderator Chris Hardwick. Gomez didn't seem to believe him. Hardwick moderated almost every Hall H panel this year but at least he seems to be doing a lot better at it than the first year I saw him moderate a panel, he seems to be doing a better job at staying out of the way and keeping conversation flowing among the panellists.

Just as I knew it would be, the whole Doctor Who panel is on YouTube so you can judge for yourself;

I did see Matt Smith this year on two, back to back panels, both for zombie movies--Pride and Prejudice and Zombies and Patient Zero. Both films seemed potentially good with Patient Zero looking superior and certainly promising the more screen time for Smith. 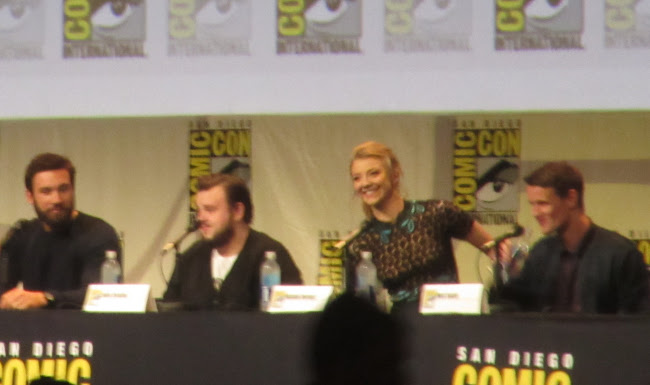 I have no idea why Natalie Dormer is the only one in focus in this photo but, hey, if the camera was only going to pick one person, I'd probably concur on Dormer. She plays Smith's love interest in the film, a fellow scientist in an underground bunker where they're studying those infected with the virus spreading all over the world, turning humanity into slobbering, vicious cannibals. Until they find Stanley Tucci--an infected who for some reason remains lucid enough to speak and to smoke cigarettes and seems to have calmly and rationally embraced his desire to eat people. Smith plays the scientist in charge of interrogating the zombies in order to find out the location of the original infected, which is apparently necessary to develop a vaccine. To Dormer's right, also appearing in the film, are her Game of Thrones costar John Bradley-West and one of the stars of the History Channel's Vikings, Clive Standen. 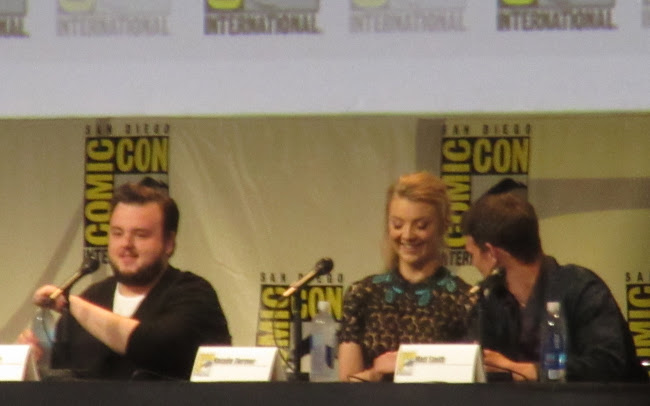 Dormer and Smith seemed to have good chemistry, too.

Smith has a much smaller role in Pride and Prejudice and Zombies, a film based on a novel that presents an alternate version of Jane Austin's classic which speculates on how things might have gone if there had been a zombie plague instead of the Napoleonic Wars. Sam Riley, who plays Mr. Darcy, seemed like a prototypical spacey film actor when he soberly told the audience he felt people in "those times" were used to there being plagues all the time so the zombies wouldn't really be a big deal. 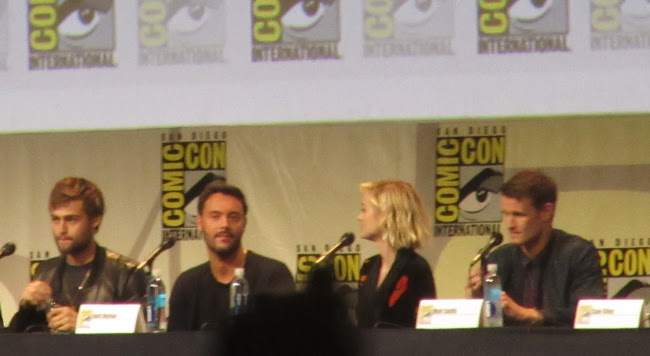 To Riley's left is Jack Huston who plays George Wickam in the film. Smith plays the clergyman William Collins. When asked if he had anything in common with the character, Smith said he and Collins both quite like muffins. When asked what his weapon of choice would be in a zombie apocalypse, Smith also replied muffins. Poison muffins. 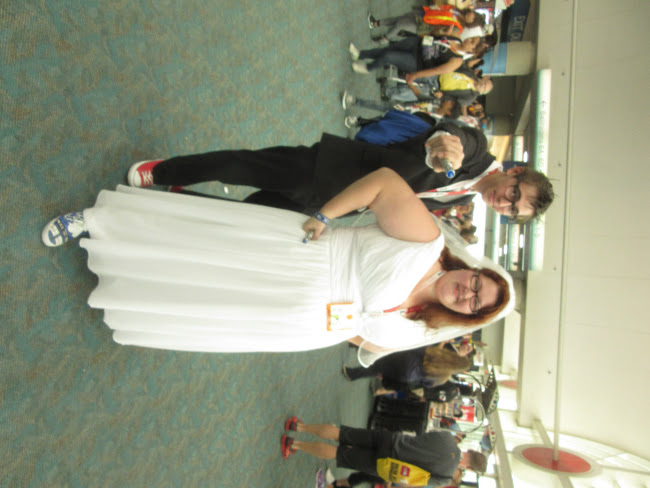 These two were cosplaying "The Runaway Bride", one of the Tenth Doctor's Christmas specials, and one of my two all time favourite Doctor Who Christmas specials (the other being "The Snowmen"). I only saw two guys dressed as Ten this year, rather amazing since Ten is usually a close runner up to Eleven. But this year I did for the first time ever see a Sixth Doctor, who is apparently married to and has a child with Sally from A Nightmare Before Christmas. 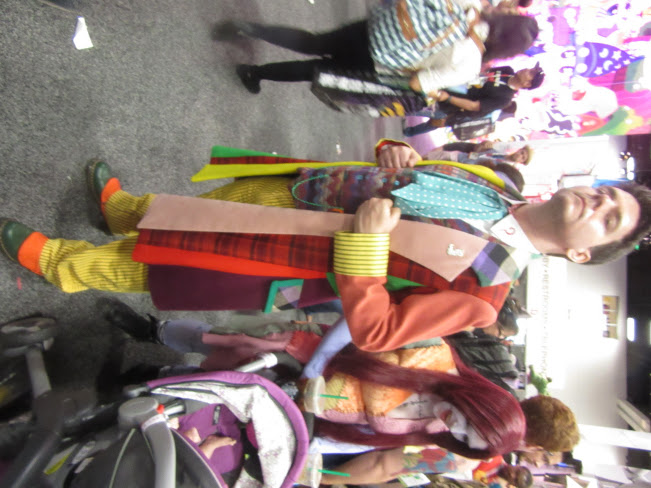 The family that patchworks together stays together, I guess.

Here's a fellow who said he watched the Fourth Doctor when he was first on the air: 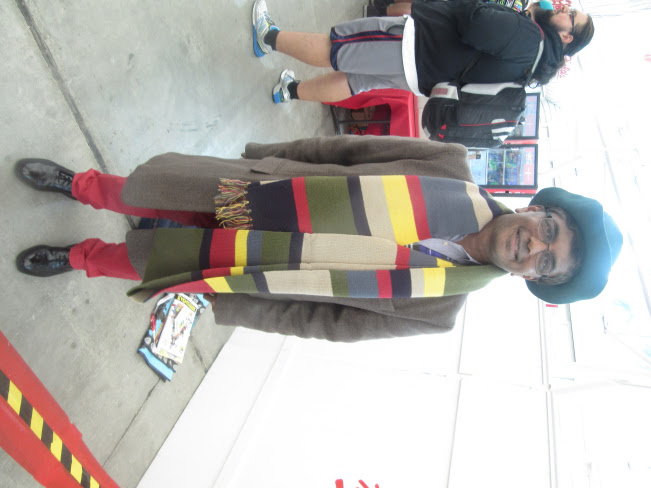 And here's a Fourth Doctor fan who I suspect did not: 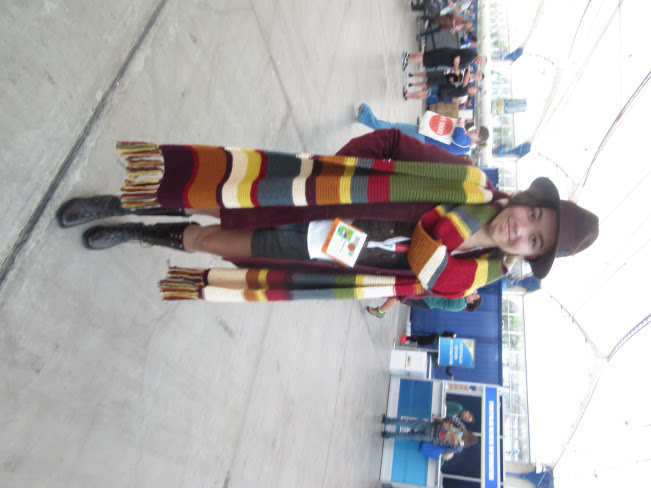 Finally, I wish I could post photos of the calavera TARDISes I saw in the art show but photography was not allowed. Take my word, though, they were pretty cool.

Tune in to-morrow, I have a lot more to write about and show. I saw several great panels this year.

Posted by Setsuled at 4:51 PM
Email ThisBlogThis!Share to TwitterShare to FacebookShare to Pinterest