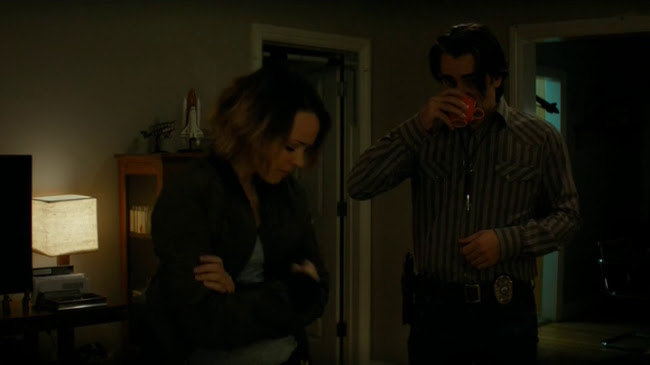 I don't know about you but I want to see Velcoro and Bezzerides get together. I guess that would be cliche but they have nice chemistry, they're both fanatics. I mean, can you imagine? Anyway, episode three of True Detective's second season was pretty good, mainly for concentrating mostly on plot stuff this time, but good plot stuff--I am curious to know who killed Caspar and how the corrupt bureaucracies of the police force and the city government play into it. On that note, the show also continues in its entertaining interviewee series by providing a wife for the eccentric mayor who looks like she could be from the U.S. version of Absolutely Fabulous. 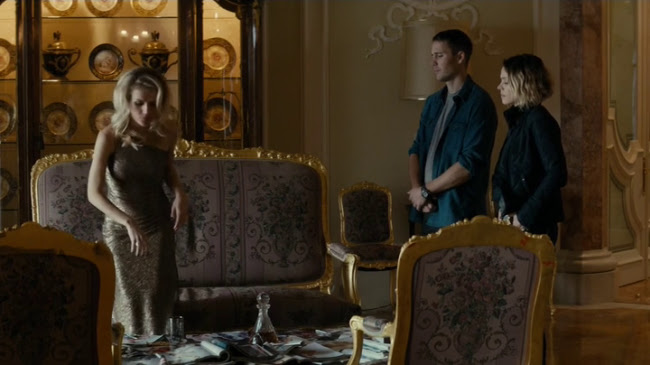 Also at the mayor's home is a white guy pretending to be black who throws a topless prostitute off the balcony into the pool. I was missing the gratuitous nudity from season one. 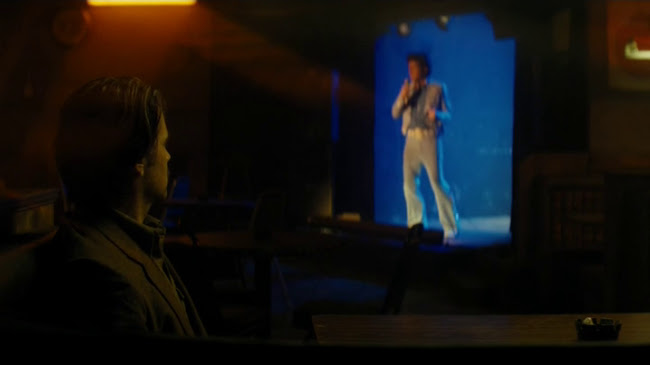 In another return to season one form, the episode begins with a distinctly Twin Peaksian scene where Velcoro, like Agent Cooper at the beginning of season two after the season one cliffhanger where he was shot, lies on the floor with his gun wound having a bizarre vision. In Velcoro's case, it's a Conway Twitty impersonator lip syncing Twitty's cover of "The Rose". In my day, it was Jimmy Scott doing material by Angelo Badalamenti and David Lynch! You kids and your country music. Fuck that shit! Pabst Blue Ribbon!

Which is a good enough segue, I guess, to mentioning I stayed up too late watching Blue Velvet again a few nights ago. I was still feeling dirty after Terminator Genisys and wanted a sincere work of art. I'd been thinking about it, too, because of the difference between the scene where Isabella Rossellini shows up naked on the street and Cersei's "Walk of Shame" on Game of Thrones. I remember reading or hearing about both Lynch's and Rossellini's influences for the scene several times, how Rossellini thought of a photo of naked child crying from the Vietnam war and how Lynch had been thinking of seeing a naked woman in the street when he was a child--how there was nothing sexy or fun about it, that it was a sign that something was deeply wrong, disordered. And that's what they accomplish in Blue Velvet, especially once they go back to Sandy's house and Jeffrey and Dorothy are standing there holding each other while Sandy nervously calls for her mother. There's none of this energy in the Game of Thrones scene but it reminded me of Blue Velvet in another way--Jeffrey confronting mysteries of sexuality, an innocent kid who doesn't yet know or acknowledge dimensions to sex beyond mothers and fathers in missionary position. That's the critics of Game of Thrones who feebly put up a front that insists the Game of Thrones scene wasn't the burlesque it was.

This morning I read the new Sirenia Digest, a very good story called "Dead Letter Office", a title that reminds me of "Bartleby the Scrivener". But the story bears little resemblance to the Melville story--I actually think "Dead Letter Office" is Caitlin's most political story though I don't know if she intended it to be. It could just be my impression that was mixed with recently having read about Greece's economic troubles. "Dead Letter Office" portrays a dreamlike reality where certain eternal beings tend to sleeping citizens. One sleeper awakens and wants water but there is no water--it's implied that the beings who are normally awake don't need such things. So there's a classism set up, the haves and have-nots--I'm reminded of the Morrissey lyric, "Haves cannot stand have-nots," from "I'll Never Be Anybody's Hero". Which makes me think of the dynamic between Germany and Greece.

On the one hand, I am basically a socialist, I think if every human being in the world isn't provided with basic necessities, the system is wrong. But I don't like the Germans being called Nazis here--there's a difference between Germany not bailing you out of debt you accrued on your own and Germany invading you and putting a portion of your population in concentration camps. Both countries signed up for this Capitalism thing and like the bible says, live by the sword, die by the sword, but it still is news, as Billie Holiday said--"God bless the child who's got his own." And Satan fuck the rest, I suppose. Though the bible also has the parable of the vineyard, where Jesus says everyone who works the field should be paid the same no matter how much time or effort was put in. Good grief, quoting the bible, what's happening to me?

Anyway, I hope Greece survives but I don't see why it should be Germany's responsibility or anyone else's, particularly when Greece has consistently failed to implement any measures against its downward spiral. So raise taxes, maybe just for the wealthiest. I guess as an American I can't really talk since my country's been living in massive debt for years. I guess debt matters a lot more when you don't have nukes.