I wonder if it's safe to set my clocks again. Hopefully the power won't go out again while I write this. I was having a dream about holding a scorpion because I'd heard there was a prize for people taking a scorpion's sting and surviving when I was awoken by a terrific crashing and boom. This was 6:30am, it's a good thing I'm still on Comic Con time because there was no way I was getting back to sleep while there was this thunderstorm outside. The first thunder I heard was exceptionally loud and each one was louder followed by flashes of light and my window blinds fluttering into my room from the open window. I've never had lightning come so close, many car alarms went off outside and when I checked out there later I was truly surprised not to find blackened and burning husks of vehicles.

Not a good time for watching movies, which is too bad because I went to Barnes and Noble yesterday where they were having one of their 50% off sales on Criterion titles. I got these four: 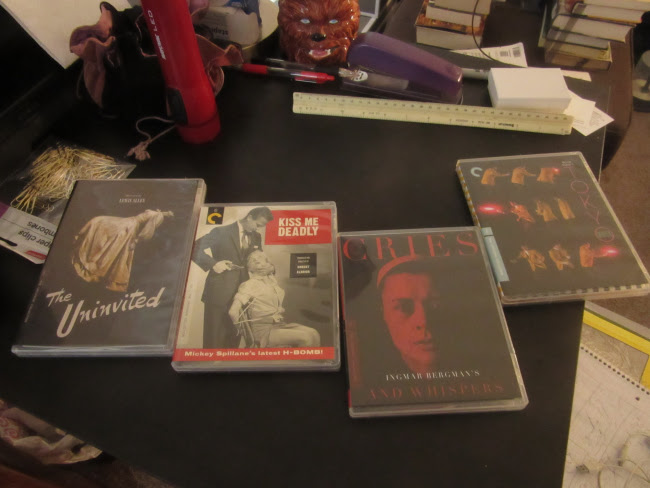 Incidentally, the books visible on the upper right are less than half of the books I've been using as research for my upcoming comic. The first twenty four pages of which will hopefully be available for reading before the end of the summer.

While inking and colouring the past couple weeks, I've listened to two Doctor Who audio plays (among many other things), Caerdroia and The Next Life, the last two stories of the Eighth Doctor's "Divergent Universe" series where he and his companions Charley and C'rizz travel through an alternate universe without the TARDIS. Caerdoia is a slightly dreamlike story involving a planet size labyrinth with various elements from the Doctor's and his companions' minds manifesting, including two copies of the Doctor, a gentle and a violent one, like the Star Trek episode "The Enemy Within", the only time I've seen Doctor Who borrow from Star Trek rather than the other way around. Caerdroia also features a minotaur in its labyrinth making--I think--four versions of the labyrinth minotaur on Doctor Who. Alongside The Mind Robber, The Horns of Nimon, and "The God Complex". Wikipedia includes The Time Monster but I don't think that one really sufficiently resembles the minotaur myth.

The Next Life felt like a direct follow-up to the anniversary episode, Zagreus, which began the "Divergent Universe" series. It even has Anneke Wills return as an illusion of Charley's mother--Wills, who played the First and Second Doctor Companion Polly, appeared in the 40th anniversary audio play along with several other former cast members in a role different from the one she originally inhabited. Also appearing this time, for the first time since the 1996 TV movie, is Daphne Ashbrook who played the companion Grace in the American/Canadian pilot. Due to the fact that apparently CBS owns everything about that pilot except things related specifically to Doctor Who as it existed outside the pilot, Ashbrook was not permitted to reprise her role as Grace, instead playing a new character called Perfection whom the Eighth Doctor encounters when he washes ashore alone on a dangerous island. I must say their chemistry is much better--funnier and sexier--here than in the pilot. Such are the wonders accomplished by better writing.