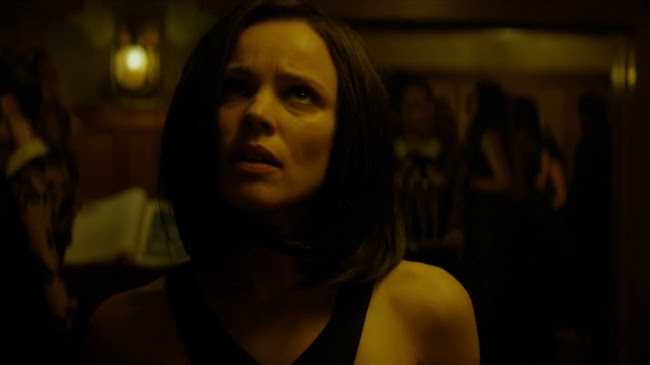 Here we are back at One Eyed Jack's. Some would say it's a bit cliche to have the badass female character placed in the sexual object position under the pretext of going undercover. But I thought the final sequence from last night's True Detective was terrific. I should note the way the sequence was shot didn't objectify Bezzerides at all, appropriately maintaining perspective from her point of view. We switch between prolonged, extreme closeups of her face and dizzy, unfocused roamings over the people in the house, all accompanied by a sort of oppressive and slightly anachronistic symphonic score ("Harmonielehre, Part II – The Anfortas Wound" by John Adams). 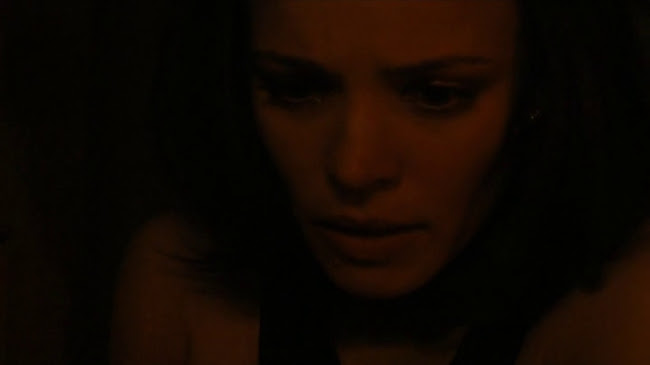 It's a very Lynchian scene in more ways than one. The music and lighting and use of closeups bring to mind Lost Highway and Mulholland Drive while the writing recalls Twin Peaks and early in the second season when Cooper and Truman go to rescue Audrey from the brothel One Eyed Jack's. Velcoro and Woodrugh even wear similar black sweaters and slacks to Cooper and Truman's matching infiltration ensemble. 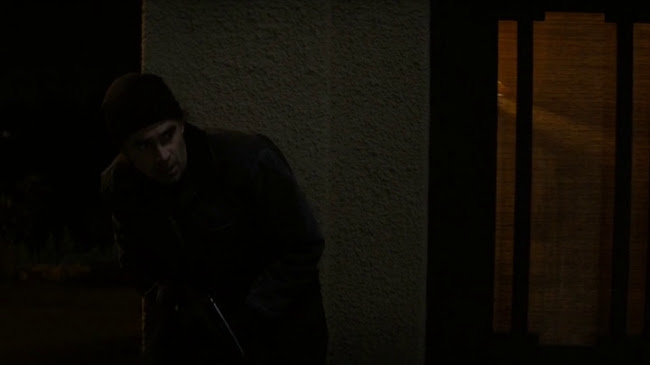 Of course, unlike Audrey, Bezzerides is more capable of defending herself and I loved finally seeing her knife work in action. I particularly loved that her lethal slashes didn't kill the guy right away, that there was an agonising moment while she waited for him to bleed out and he was bewildered by the experience. A great moment.

Like Audrey, Bezzerides was drugged and she also has a confrontation with memories of childhood abuse by a man her father's age. Not quite as weird and disturbing as Audrey's encounter with her father but interesting for exploring Bezzerides character which I think could use some more focus, as much as I like her. I also wish she and Velcoro would spend more time together, that one scene in the bar was great but I'd love to see more. So far no pair on the show has developed a bond quite as interesting as McConaughey's and Harrelson's in season one. 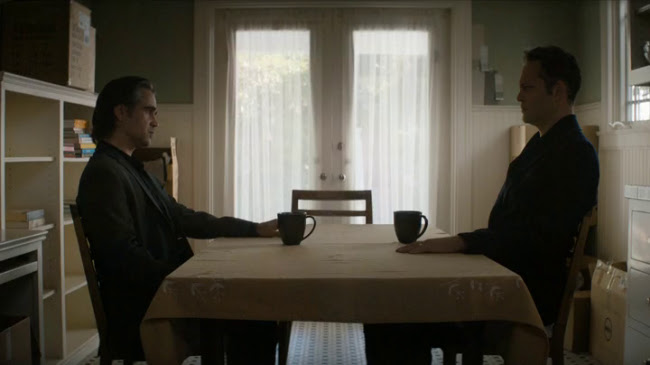 I didn't find Velcoro's story about custody of his son particularly interesting in this episode though I loved the sit down stand-off between him and Semyon and Velcoro's line about how he'd sold his soul for nothing--that's exactly what I said about Stannis on Game of Thrones, if you remember. People are so busy looking for Byronic (or Satanic) heroes lately it's nice to see when a deal with the Devil goes wrong as it more often than not does.

I've been puzzling over the scene where Velcoro's seen doing cocaine. The song he's listening to, I thought, "This sounds very like 'Human Being' by The New York Dolls but not quite." Yet googling to-day, the info I find seems to indicate that it is New York Dolls with "Human Being". But it's a live version I don't know. Or maybe it is the album version and I'm used to the live version. It's a lot better than Conway Twitty, in any case.

Posted by Setsuled at 2:34 PM
Email ThisBlogThis!Share to TwitterShare to FacebookShare to Pinterest