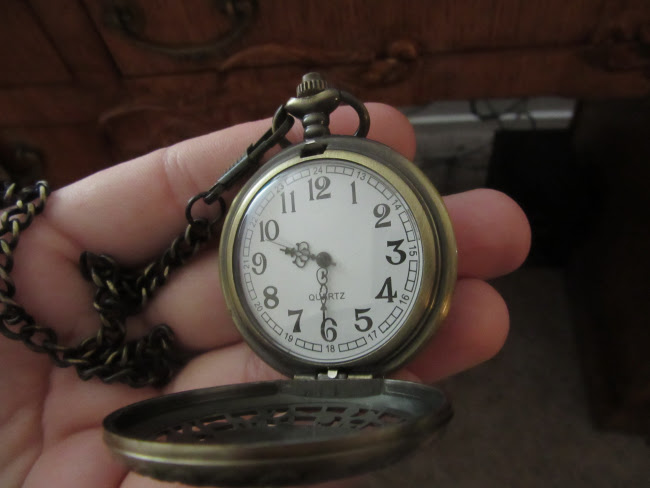 I don't normally buy things for myself at the Con but this year I finally bought one of the pocket watches I eye every year at the booth for Honeck Sculptures. I'd bought some watches from them last year for my mother's and sister's birthdays but now that I have some waistcoats I figured I needed one. They had winding watches and battery powered watches, I would have preferred a winding watch but I really liked the owl design on this one. 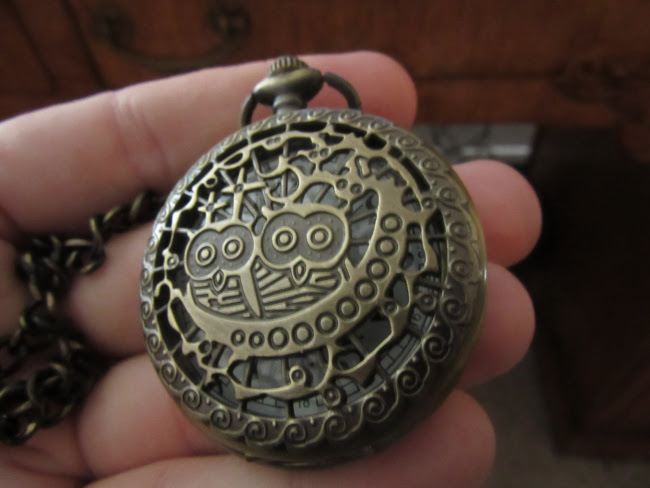 It was thirty five dollars. I spent around sixty dollars on gifts for other people so plus trolley fare for the five days I'd say I spent about 120 dollars on this Con. It certainly helps that I get a free professional badge, it also helped that I packed my lunch every day, which I recommend everyone do who plans to go to Comic Con in the future. The queues for overpriced, disgusting pizza are almost as long as the queues for panels. This year I made myself sandwiches--wasabi, red wine vinegar, mayonnaise, cucumber, black olives, jalapeño, provolone, and tofurky. I also always packed a granola bar and an apple.

There were a lot of things at the Con this year that I've covered multiple times in years past, like the sword fighting on the mezzanine--if you want to see that, it was pretty much the same as the videos already up on my YouTube channel from previous years. One of the new things this year was Mad Max: Fury Road cosplay--I asked this woman if she was dressed as Furiosa and she told me she was in fact the male character War Boy. Which seems a vague matter for gender swap cosplay, possibly she just didn't know how to handle Furiosa's mechanical arm. 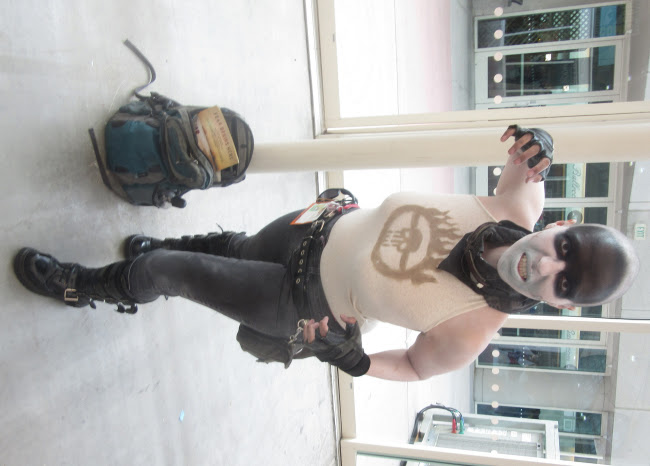 Female cosplayers have outnumbered male cosplayers for years now though this year I think it was an almost total rout. I felt like there were fewer cosplayers in general, actually, but certainly at least 85% of them were women. Here's one of the two female Beetlejuices I saw: 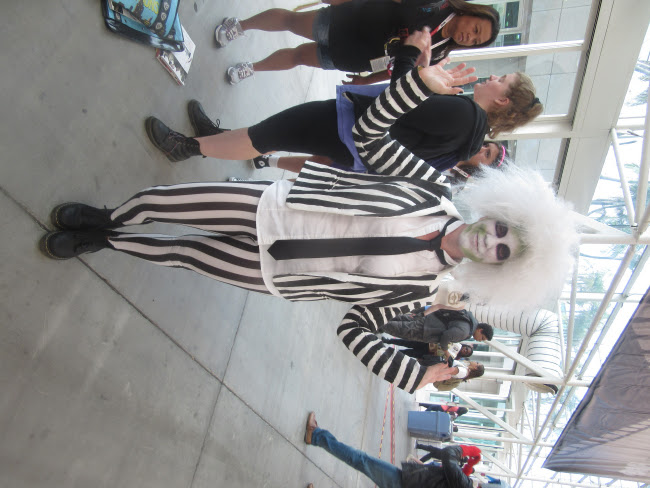 I heard a group of Disney princesses exchanging stories about making costumes and one of them turned to another and said, "You see? It's girl's stuff." To put it mildly.

Here's a different group of Disney cosplayers with one man almost hidden in the back: 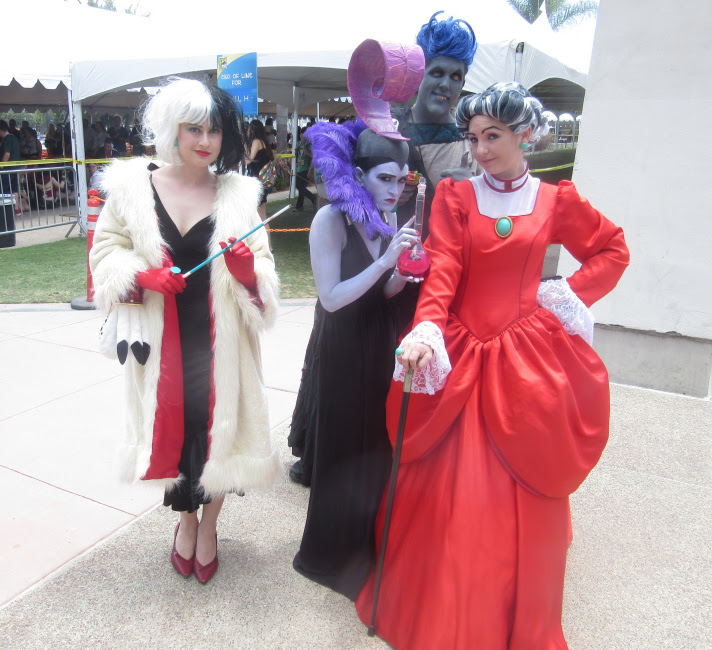 Disney certainly had a strong presence this year. Here's a Belle from Friday morning: 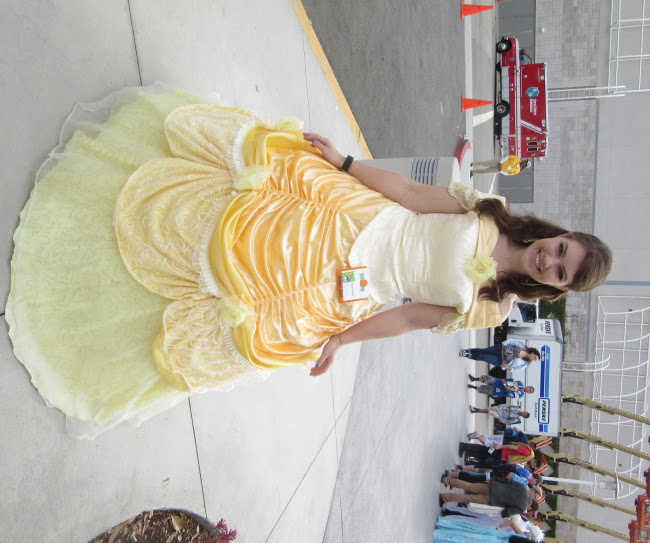 I think this lady's from Frozen, I'm not sure, I've only seen the movie once. 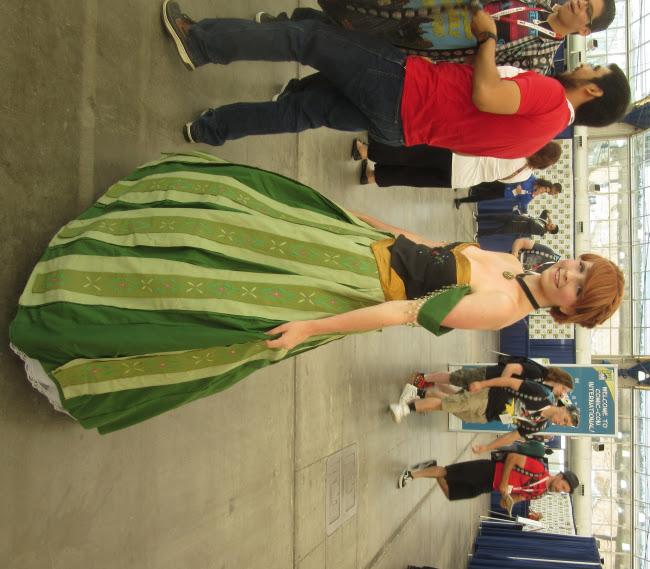 Surprisingly, I don't think I saw any Elsas.

I think this woman is a character from Iron Man (yes, this is also a woman); 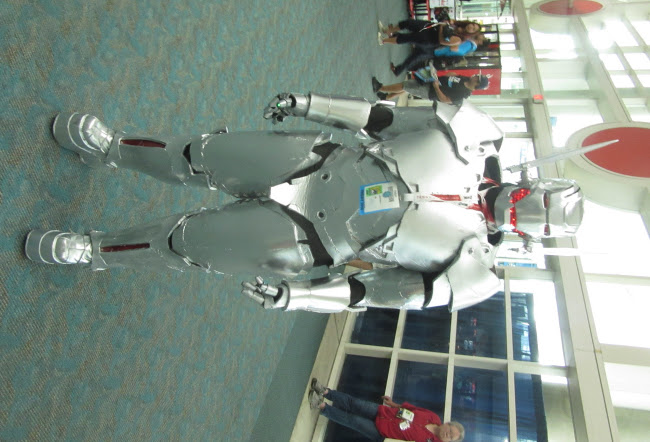 I felt like I saw more DC characters this year, though fewer Harley Quinns than usual. There were numerous Batgirls like this one, I don't know who her friend is dressed as: 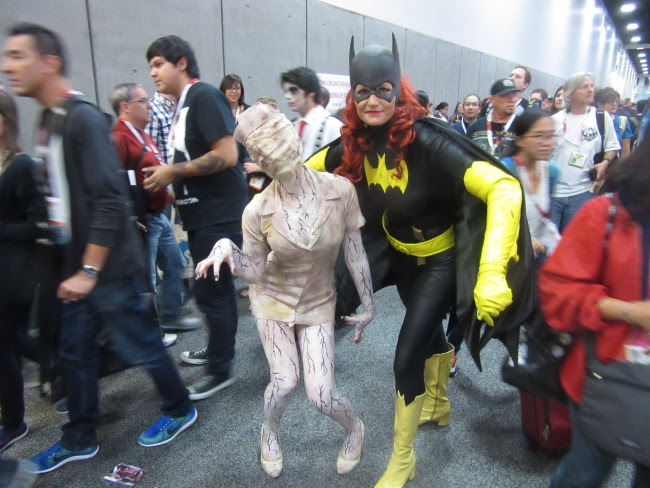 This baroque Joker and Harley Quinn were pretty amazing: 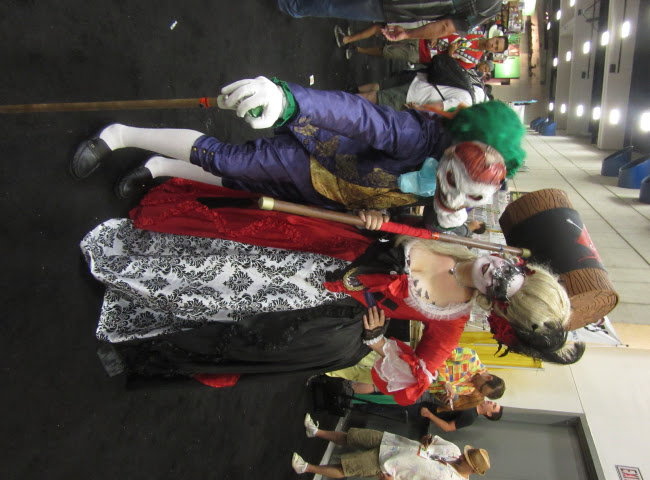 The detail on this (can I call her "steampunk" without getting in trouble?) Bane's costume was pretty great, the mask was made of keys: 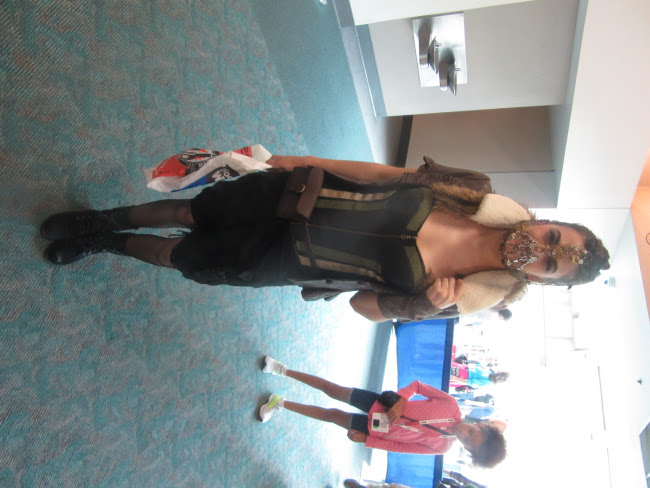 Here are a couple Star Wars cosplayers I forgot to post yesterday. I told the one on the left I liked to believe all stormtroopers have purple hair. 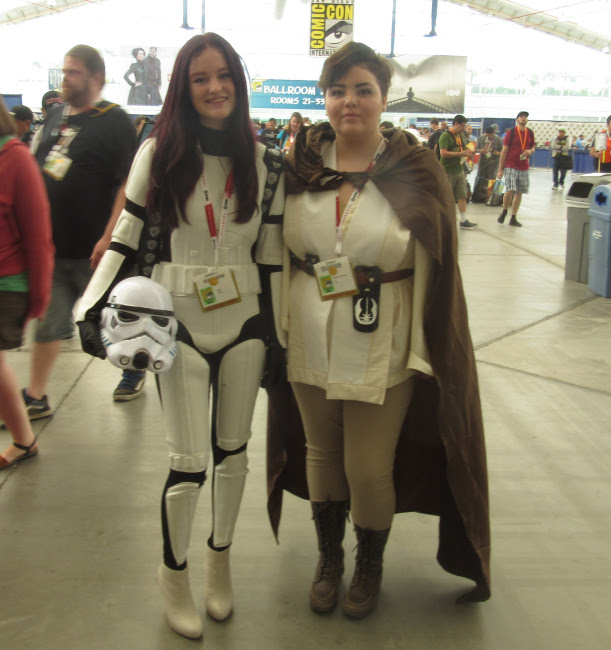 I asked this woman if she was a specific character or just "the human body". She's from the anime series Attack on Titan which I've still only seen one episode of. 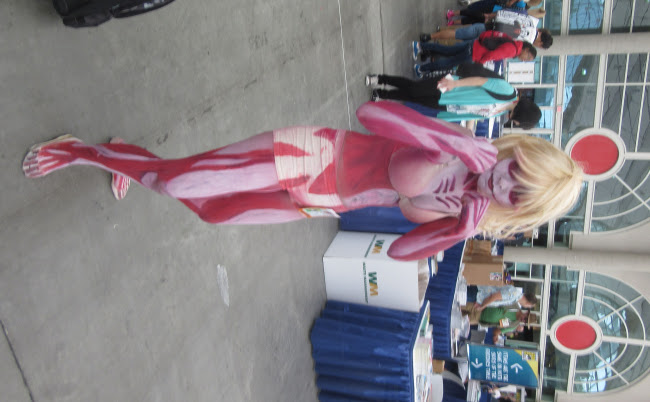 I didn't make it to the anime theatres this year but I saw plenty of anime cosplay. Evangelion fandom is still going strong--I called out "Rei!" to get this woman's attention. When she didn't seem to hear I called, "Ayanami!" She replied, "Yes, I only respond to my last name." 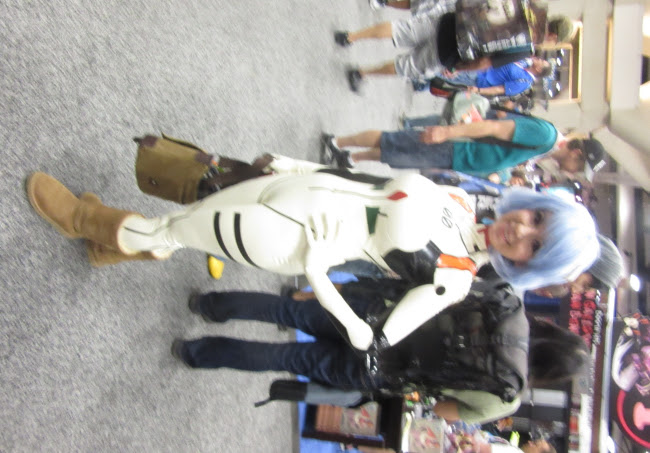 This group of Hayao Miyazaki cosplayers had just gotten their badges--I suspect for the first time ever because all of them, particularly the No Face on the left, seemed flabbergasted that anyone would want to take their picture. 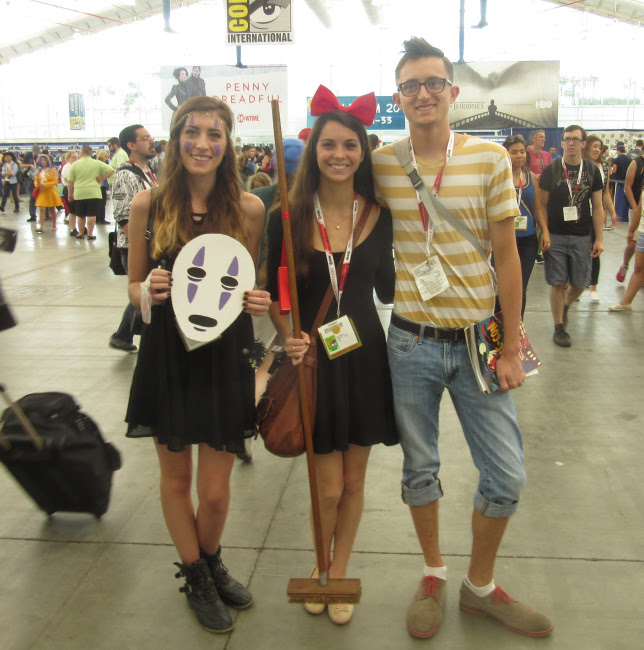 This Yoshi warrior woman even had a decorated phone in her belt: 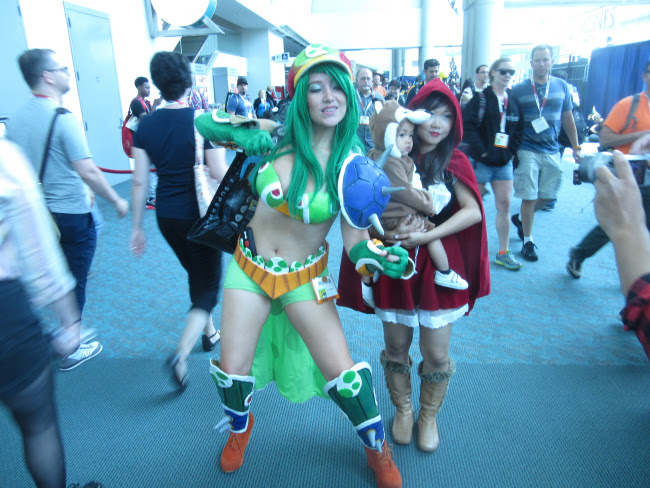 I don't know who this woman is dressed as but she found a pretty cool pose scene for herself: 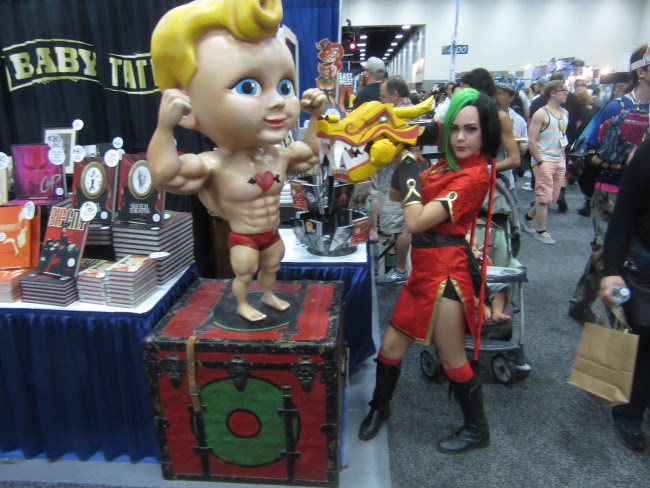 I met this woman on the trolley earlier in the morning and ran into her again at the Con--she was dressed as Mrs. Lovett from Sweeney Todd. I asked her boyfriend if he was dressed as Jayne or if it was just a hat. "Sure," he shrugged as though saying, "It can be Jayne cosplay." 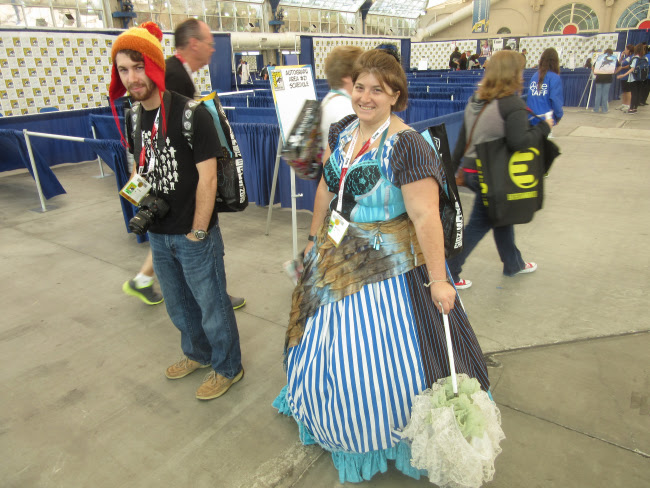 Well, I think that covers just about everything except the million little things I've forgotten and will probably mention later. It was a nice Con this year.

Posted by Setsuled at 11:23 AM
Email ThisBlogThis!Share to TwitterShare to FacebookShare to Pinterest