The Problem of the Extra Man 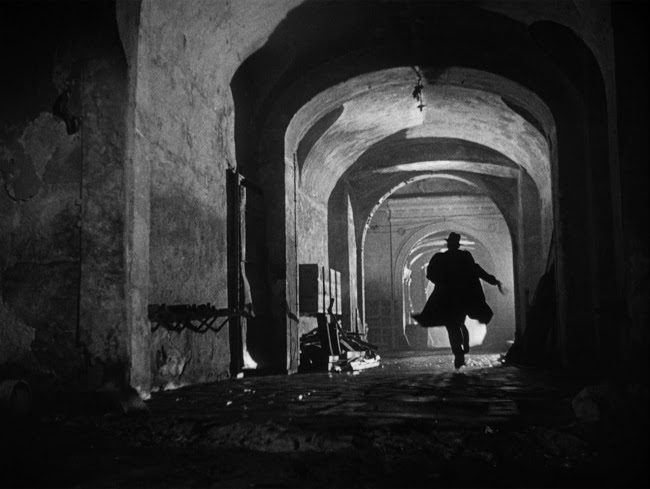 Studio Canal is releasing a new restoration of 1949's The Third Man. They've also released the film for a limited theatrical run in certain cinemas--if it's playing near you, see it. I saw it yesterday at the Ken cinema here in San Diego, a very old one screen cinema that shows independent and older films. The Third Man looks absolutely gorgeous on the big screen and it was a particular pleasure seeing it with a full house, the intelligent, fast moving film keeping people in the audience quiet and it was wonderful hearing which lines cued the audience to laugh, like when Sergeant Paine reveals he's a fan of Holly's books after Holly'd been grilled by Major Calloway who'd never heard of him.

All the staircases, the rubble of post World War II Vienna, the cat who knows the man in the doorway, it's all so beautiful. Its ideas about Capitalism dehumanising people are certainly still relevant to-day and the elegant, quiet way it proves its point about universal humanity by making us love even the man who would exploit innocent people is great. Orson Welles' speech about the "mugs and the suckers" and how human achievement seems to coincide with human depravity is as eerie and troubling as ever especially as he speaks with that charming smile. The mischievous school chum become mass murderer, maybe this is just the natural order and progression of things.

That wonderful final shot that muddies the moral waters further by making us agree with Anna even as we'd agreed with Holly a few scenes before, a frightening paradox but presented in a tranquil moment on a tree lined lane with falling leaves.

Posted by Setsuled at 1:02 PM
Email ThisBlogThis!Share to TwitterShare to FacebookShare to Pinterest