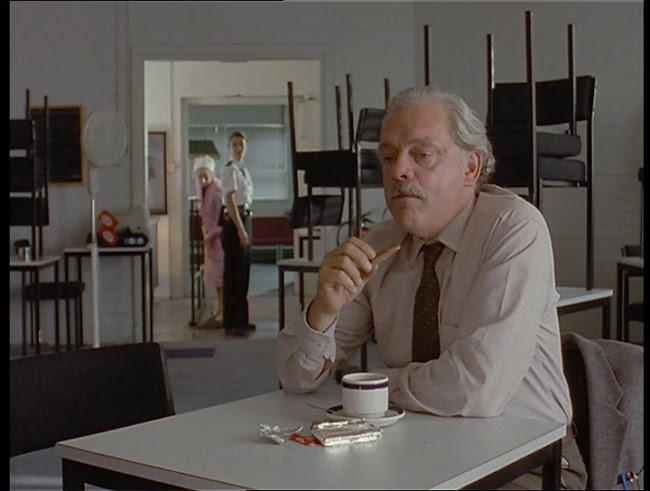 Okay, so I've made Touch of Frost seem like a nice enough series with an interesting star. But what about sex? I didn't even mention whether Detective Frost could make a living as a gigolo if he wanted to. Fortunately he himself addresses the question in the season four episode "Fun Time for Swingers" which aired twenty years ago this January. 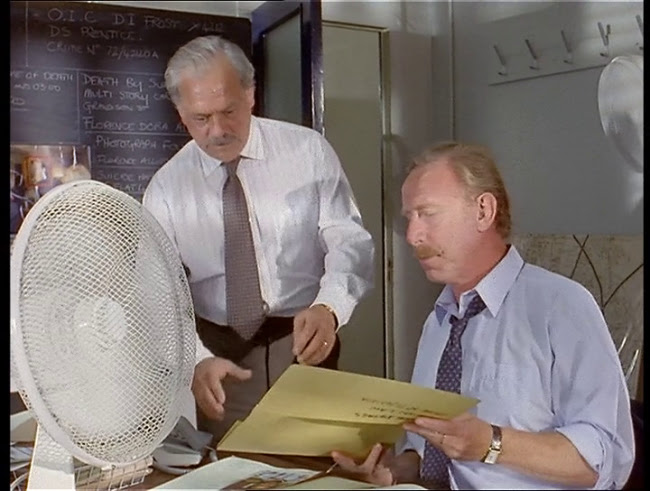 It's the first episode I can remember to be set during summer so Jack isn't wearing his trademark beige trilby, red scarf, and dove grey overcoat. It must be exceptionally hot in the fictional English town of Denton (apparently not meant to be any of the real Dentons in England) because all the cops are in shirt sleeves except Frost's latest in his Partners of the Week, a puritanical Scotsman played by the late Russell Hunter who talks about discipline before pleasure and wears a three piece suit. 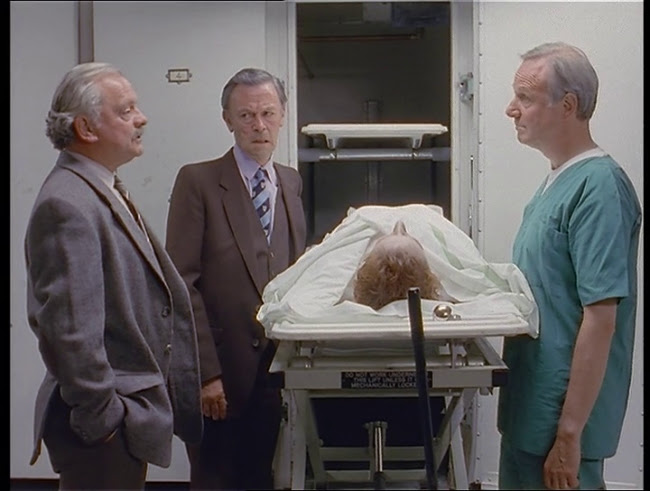 I see from his Wikipedia entry that Hunter starred in a series with Edward Woodward, which is fitting since he kind of reminded me of Woodward's character in The Wicker Man in this Touch of Frost episode.

All the cops sweating and fanning themselves while they work reminded me of Kurosawa's great procedural film noir Stray Dog but I think it was mainly meant to amplify the sex in the episode. It has its fair share of ultra-violence, too, as the show seems to be continuing its goal for the fourth season to make the show a grittier, more modern, cop show. 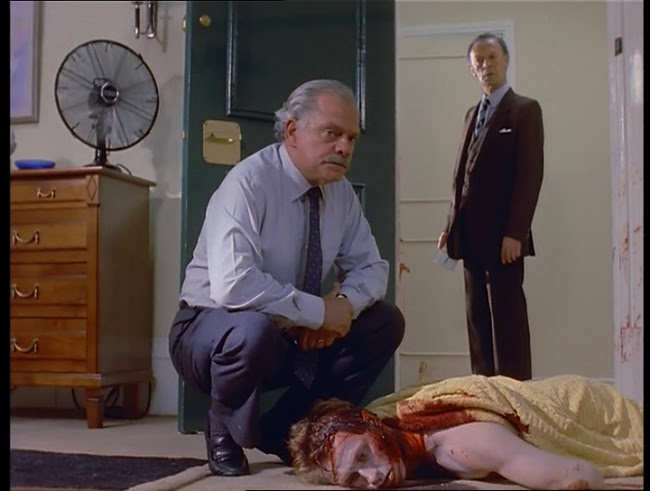 I love how subtle Frost's weirdness is sometimes, like how he at various times in this episode compulsively starts explaining to Hunter's character what it takes to be a gigolo. David Jason has a pretty amusing chemistry with Hunter and his character who doesn't actually come on very strong in his disapproval of the hedonists in their investigation of a gigolo's murder. The fact that Hunter's character doesn't browbeat despite being a hardliner about his own affairs makes Frost's compulsion to defend casual sex funnier and ironic when he can't disguise his disapproval of a gigolo he interviews.

The episode begins with a naked woman committing suicide by jumping off the top level of a parking garage, which is certainly the high water mark of lurid for the show so far. In the morgue, Frost is a bit callous discussing the affair, as befits a modern cynical detective but still expresses sympathy for her. Of course, the implication is that the woman was destroyed by indulging in casual sex; despite the debate between Frost and his partner, the makers of the show are bound by a certain morality. Frost's advocacy for casual sex and adorably awkward ponderings on the life of a gigolo are thus rendered a sort of obligatory representation of the opposite view. But the show doesn't really feel committed to the argument, the episode consequently feeling sort of muddled and cosily amoral.