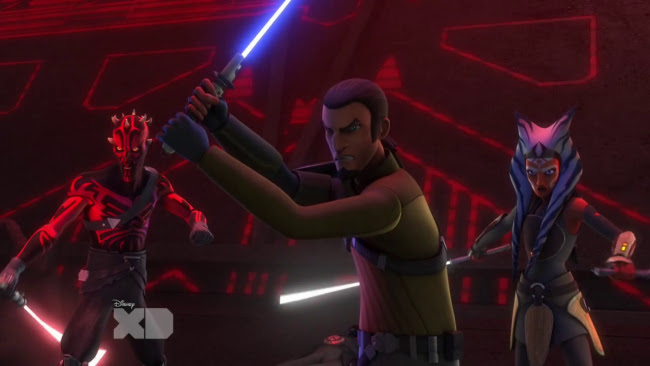 Well, that was a deeply unsatisfying season finale for Star Wars: Rebels. I'll lay the blame squarely on Simon Kinberg, who I thought had left the series but in the finale made a dramatic comeback to write the kind of dreck studios give him big money for. He brought the magic of X-Men: Last Stand and the latest Fantastic Four reboot fully to bear in an episode of Rebels filled with characters appearing to die and obviously not dying, bait and switch character non-development, non-entity female characters, and, of course, stunt casting. 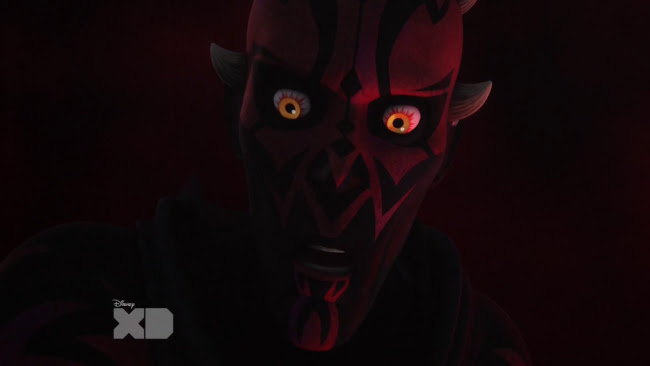 Hey there, Maul, whose appearance in the finale was spoiled by the trailer at the beginning of the season. Maul was there to go through the motions of turning Ezra to the Dark Side but he was no match for the reset button the episode ended with. Oh, yeah, there'll be spoilers ahead, if there can be spoilers on a show of such sound and fury signifying nothing. 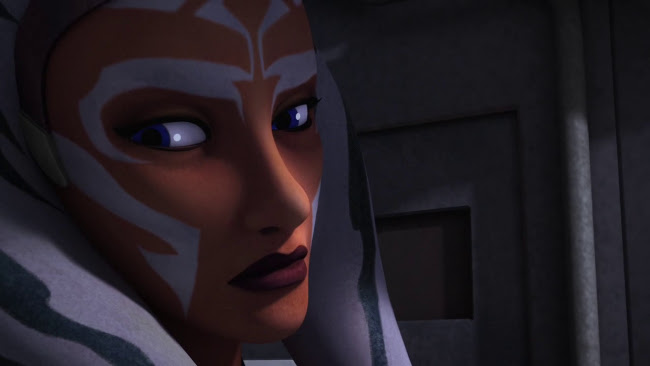 So wasn't it great they brought Ahsoka back, even if she did look like a completely different person? I mean, wow, all the cool and interesting things she did this season. Like . . . remember that time she . . . well, she hit something with her lightsabre. And she said she's not a Jedi. And she said Kanan was doing a good job training Ezra . . . Well, I'm sure she was doing all kinds of cool things just off screen!

For a whole season of Ahsoka being a fifth wheel, this really was a fitting finale in which she appeared in at least half the episode doing practically nothing. It was the culmination of superfluity. Like the scene where Ezra's about to fall of the cliff, threatened by the Inquisitor. Kanan's been knocked out but surely Kanan will save Ezra in the nick of time--but no, Maul saves Ezra, undermining the Master and Apprentice relationship between the Bible Brothers. And oh, yeah, Ahsoka was also there but I think it all happened so fast she couldn't do anything. 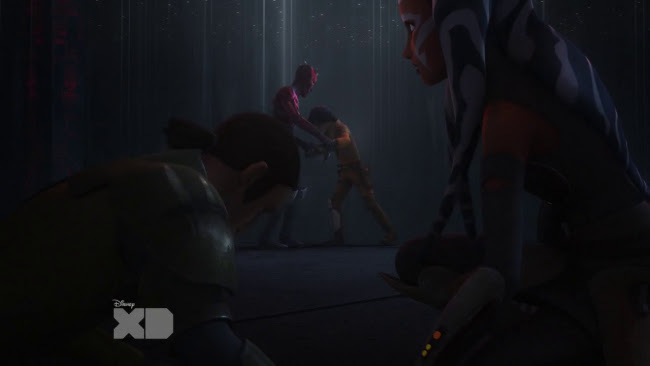 Or the scene where Maul and Ezra are trying to convince Kanan to stay and investigate the temple they came to the planet for and he finally relents. Ahsoka nodded in that scene, very possibly affecting Kanan's decision! Just imagine how different it would've been without her! Kanan might have given up the whole mission for no apparent reason.

Never did I more strongly feel like Ahsoka was crammed onto the show after all the scripts had been written. The fans wanted her so bad they weren't paying attention to Ezra. So Disney said, "Here, here's your damned Ahsoka. Look at her or whatever it is you do with her. Now pay attention to Ezra!" 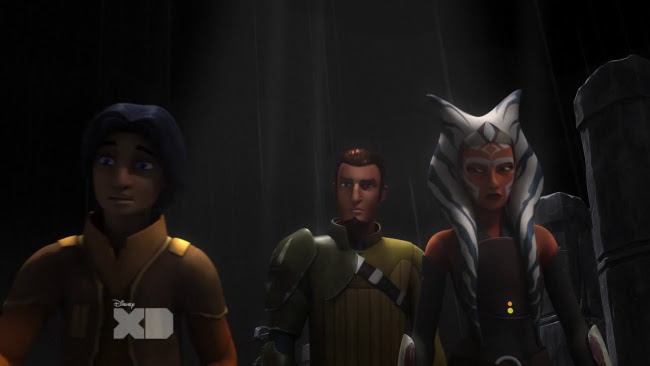 There really wasn't much else to do but look at her in a series that has been generally hands off when developing female characters, a few nice spots with Hera being exceptions. I think men are capable of writing good female characters but I can't help thinking the complete lack of female writers is in some way related to the lack of developed female characters. Clone Wars, by contrast, had already had four female writers, two of them writing multiple episodes, by the end of its second season. Admittedly, one of those writers was Katie Lucas, George's daughter, but she actually did a decent job. 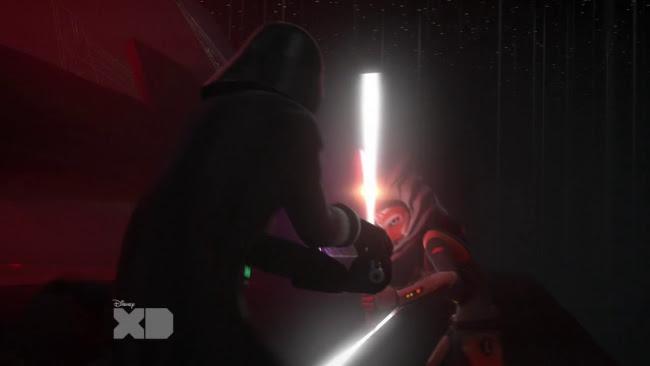 Now, you might be saying, how can I say Ahsoka didn't do anything when she finally had her showdown with Vader? Well, what exactly happened in that fight? Ahsoka confirmed Vader used to be Anakin. James Earl Jones delivering the line about how he destroyed Anakin was pretty cool. But no-one's opinion was really changed. And, more crucially, no-one died. And, yes, I am happy Ahsoka isn't dead and there's opportunity for someone to do something interesting with her. But when you have two characters fighting to the death and then show the two characters walking away from each other, alive, it naturally prompts some questions. Like, why would you skip over the part where people made decisions and things changed? The answer is, of course, they wanted Ahsoka out of the way without committing to killing her. Because they didn't want Ahsoka there at all in the first place.

I'm amazed at the number of people wondering if Ahsoka is dead or not. How did you not see the shot of her walking away? She wasn't even concealed by mist or anything. Look, here's the shot: 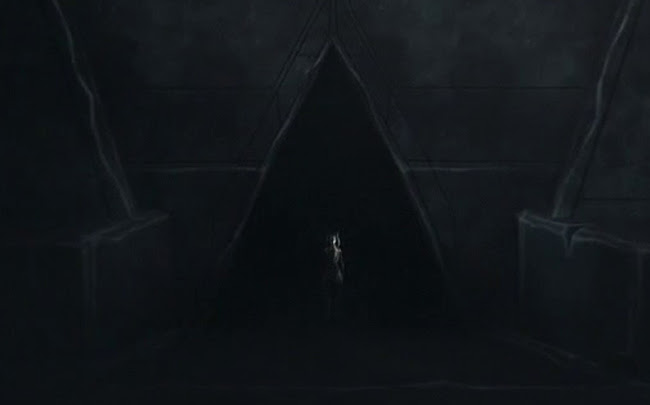 Ahsoka. After the fight with Vader. Walking. Maybe she's a zombie. Probably not.

Oh, okay, a couple things changed. The Inquisitors no-one cared about died. Maybe you're not allowed to kill characters on a Disney show unless they've had absolutely no character development. Maybe that's why they're able to kill stormtroopers.

And Kanan was blinded. I guess that's something. Something superficial. In terms of relationships, everyone's right where they were at the end of season one.

Unbidden icons crouch in bananas.
A spoiled parasol succeeds the sun.
A golden bully drifts though cabanas.
Embarrassed blank cannons concede the gun.
Too rare, the wine cellar remains above.
Inverted architecture traps the mite.
For all the edifices point to love
Or something like an edifying light.
The wooden car refutes the use of air.
In spiralled blobs, the gas revokes the foot.
Iridescent and black, it takes the stair.
The ghost will not remain where it was put.
Unnoticed noses seed congested brains.
A million dollars see the song now wanes.