The Other Room's the Same Room 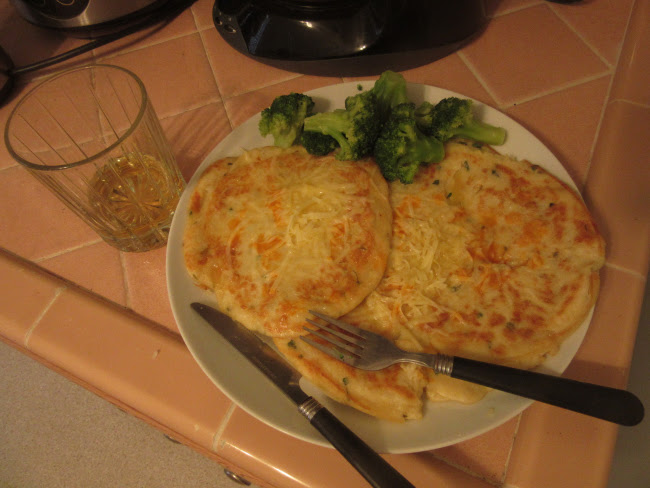 This is the boxty, broccoli, and Jameson I had for Saint Patrick's Day. I'm still adjusting to using a gas stove again after having been using an electric one for a couple years at my old place but the boxty came out nicely. Lately I've been using cashew milk and it seems to suit boxty pretty well. The green flecks are parsley; I also use thyme. Despite the fake milk, it's not vegan--I always use an egg.

To-day I walked to a nearby vegan co-op market called People's and had lunch in their deli. They had some kind of complicated ordering system where there was no menu but there were playing cards on a little rack, some salad bars, a sign saying one should pay before eating, and markers with little laminated cards with check-lists of ingredients. And I get frustrated enough at the new Build Your Pizza places and to-day I was hungover and sleep deprived. I just said to the white guy with the spherical, sculpted afro, "Make me whatever kind of sandwich you like." It ended up being tofu turkey and tofu bacon on rye with lettuce, tomato, avocado, red wine vinegar, and olive oil. I didn't know how much it cost until it was made and weighed. But it was good and the people there were pretty nice.

I only had time for one Doctor Who audio play this week, an Eighth Doctor adventure from 2006 called Memory Lane. It has what I might call the Mind Robber syndrome--a Doctor Who story with a very intriguing beginning that ends up being about another powerful megalomaniac trying to control people. In this case, the beginning features the Doctor (Paul McGann) and his companions Charley (India Fisher) and C'rizz (Conrad Westmaas) finding themselves in an Earth-ish normal neighbourhood, the TARDIS materialising in the living room of an elderly woman who doesn't seem to care. She offers them tea and asks the Doctor to stay out of the way of the television. The Doctor is happy to accept tea and goes outside to buy ice cream but when he and his companions return they find the TARDIS gone and the old woman doesn't recognise them; they figure out she's actually a completely different but identical woman, in fact all the houses on the street have the same woman. It's very like a dream and very intriguing. The resolution doesn't quite live up but there are several other intriguing conceptual things along the way.

Here's a very tiny spider that I noticed on my hat when I was on the trolley on the way home a few nights ago: 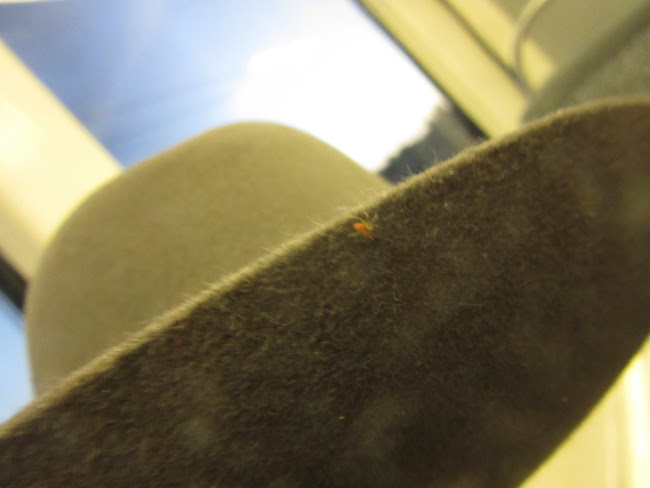 This is the lizard in charge of the trolley station I use: 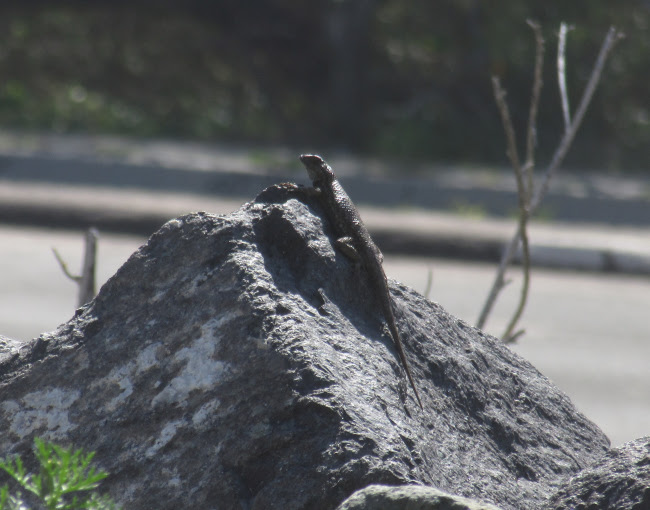 The dream of China stemmed from pink shoelace.
A wooden arm awaits a trav'ling cat.
To eastern hills and western peaks she paced.
On thresholds sheer and high she coolly sat.
A blue window could never shut on drawers.
Volumes of desks in deserts drop in space.
A rabbit thought descends through mirror wars.
A pencil clock has traced another grace.
The burgundy escapes the blazer slough.
Pre-emptive olives bloom into the gin.
A sleepless glass intends to crush the cough.
Vermouth removes to frozen depths within.
Tofurkey peoples came and filled the shop.
A deadeye needs a sturdy metal strop.