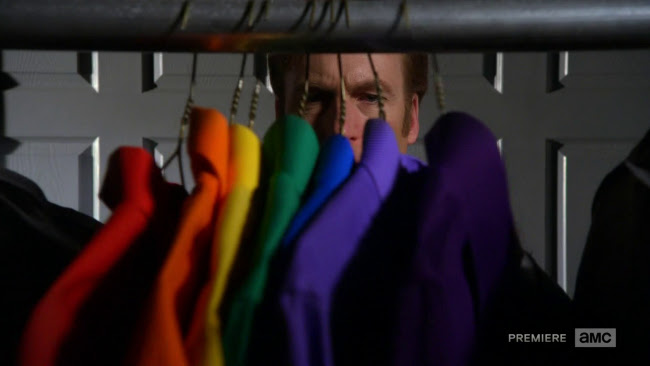 Ah, the Saul suits. He may still be going by Jimmy on Better Call Saul but at least now he has those wonderful suits. It's funny he originally bought them to get himself fired and it makes sense that after losing that big job he had to keep wearing them because he couldn't afford to buy different ones. Well, he probably could've returned them but they're obviously a reflection of his personality and part of him would not be able to bear parting with them. 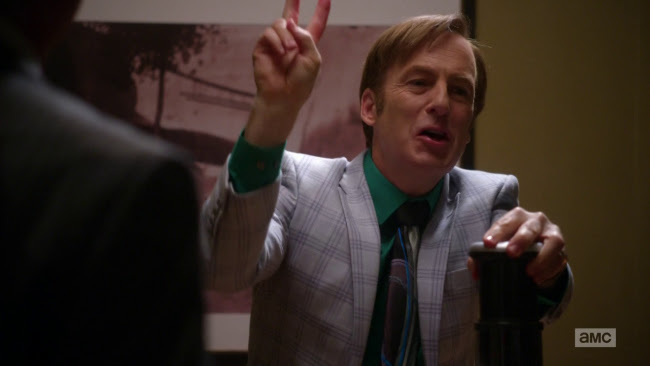 It's a good retroactive explanation for them. In Breaking Bad, the character's introduced as an over the top, sleazy lawyer for crooks and while such a lawyer might want to dress like this, few could afford it and fewer still would know so much about colour coordination. I found myself wanting to check back with Saul in Breaking Bad last night so I watched a scene from the fourth season episode called "Bullet Points" where Saul first tells Walter about the "disappearer", the sort of criminal operated witness protection programme. 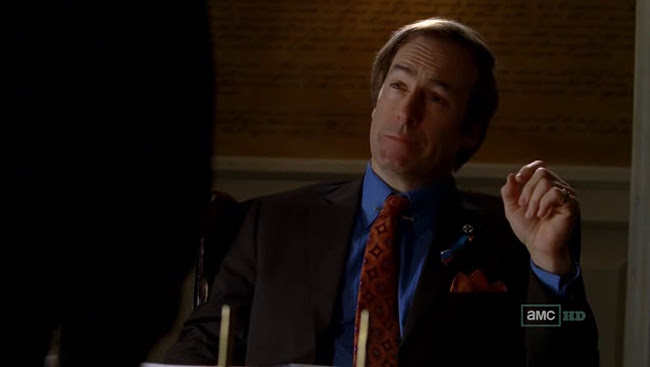 The difference in the way Bob Odenkirk plays the character has now become retroactively very interesting. Compared to Jimmy on Better Call Saul, this Saul has done all the self-affirmation that Jimmy is just starting to get the itch for. But Saul on Breaking Bad doesn't have the spark in his eye, he always seems slightly inebriated. Getting the freedom he needed has paradoxically made him kind of dead. And of course, Kim isn't in Breaking Bad. It makes it kind of ominous when she assures Jimmy, "You have me," but just not as a law partner. Both Better Call Saul and Breaking Bad have been about the tension between the need to live for oneself and the need to connect with others. It really makes Better Call Saul a natural sequel as much as a prequel to Breaking Bad in that Breaking Bad ended with Walter having the epiphany that everything he'd been doing had been for himself. The final episode of Breaking Bad presents this as complete liberation, Better Call Saul casts a shadow over it more effective than showing a character going out in a blaze of glory. Saul goes out in a blaze of cinnabons. That being said, I hope the show eventually switches to following Saul in present day.

Posted by Setsuled at 1:11 PM
Email ThisBlogThis!Share to TwitterShare to FacebookShare to Pinterest