The Carefully Shaped Reality of Politics 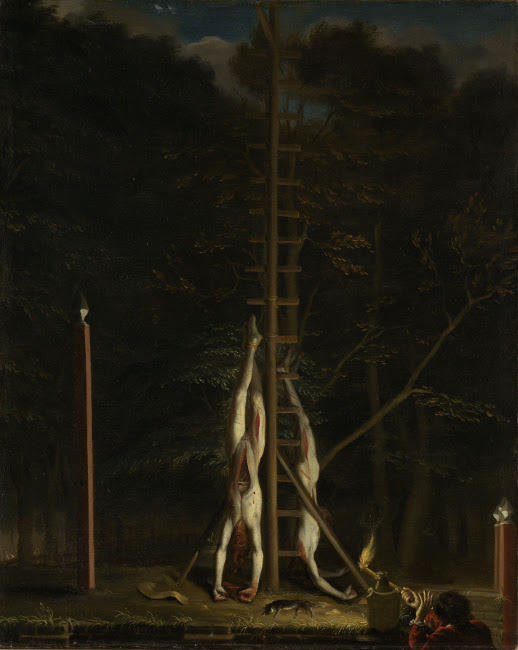 This is one of the most gruesome pictures ever painted largely because it's not the product of twentieth century Expressionism or an illustration out of Greek mythology. It's a product of the Dutch Golden Age, a period primarily concerned with portraiture, biblical scenes, and still lives. And it is a portrait, painted from life by Jan de Baen. The two men depicted are Dutch Prime Minister Johan De Witt and his brother, Cornelis, after they'd been murdered, mutilated, and partly eaten by a mob of Royalists. The event was depicted in 2015's Michiel de Ruyter, a film of impressive budget. It's entertaining enough but so light weight and partisan that it makes its inclusion of the murders seem bizarrely and strikingly incongruous.

Michiel de Ruyter (Frank Lammers) was a friend of Johan de Witt (Barry Atsma) and admiral of the Dutch navy during the Anglo-Dutch Wars. De Ruyter was responsible for many brilliant tactical victories against the English and the French and oversaw the covert Medway mission where Dutch ships deployed saboteurs to torch much of the English fleet while in harbour, taking the flagship Royal Charles in the process.

The film has an undeniably conservative partisan tone with William of Orange, De Witt, and De Ruyter portrayed as uncomplicated paragons of honour. It requires the filmmakers to make William of Orange (Egbert-Jan Weber) improbably ignorant of the conspiracy to leave the De Witts vulnerable to the mob, focusing instead on his decision to leave the Republican hero De Ruyter in charge of the navy.

For all the grandstanding the characters do about working for the good of the Dutch people, often pretending to argue while shouting the substantially same argument at each other, this is another of those modern films that doesn't actually seem to know or want to know very much about the common people. Every character in this movie is wealthy; either nobility, royalty, statesman, or high ranking military. Which makes a scene where a mob tears apart and cannibalises two men seem all the more unreal. What drives a people to something like that? The clearest the movie can get on the grievences is either mere team loyalty--one scene has De Ruyter's wife absurdly talking down another mob who think there's a secret plot to murder the prince--or the threat of invasion from France and England. Which were certainly real threats though not in quite the way the film portrays. De Witt absurdly blames the English aggression on a hatred for their republic at the end of the first Anglo-Dutch War, the film conveniently failing to mention that England was a republic at the time, it being the middle of the 1650s.

The lack of attention to the lower classes reminds me of Game of Thrones which makes it appropriate that Charles Dance appears in the film as Charles II, who the film makes it seem as though he was already on the throne in 1654.

In one of the more impressively ill-considered lines in the screenplay he tells William with clear disgust that the only reason England was Protestant was because Henry VIII couldn't keep his prick in his pants. Putting aside the vast oversimplification of the history of Anglicanism, Charles II taking a jab at a king for sleeping around is ridiculous even in the context of the scene where he says it as a few minutes later a woman sits on his lap with her breasts hanging out.

And no, she's not his wife.

You'll notice he's not wearing a wig. He and William cannot stop tearing off their wigs in this movie, clearly because the filmmakers didn't like the wigs in vogue at the time. But since the clothes are all balanced for the big hair pieces, Charles and William end up looking like they have tiny heads without them.

The movie does have some nice visuals, though. I liked the naval battles. They were mostly cgi but I like the broad colour palette instead of the usual dull colour filters. They look a little like van de Velde paintings.