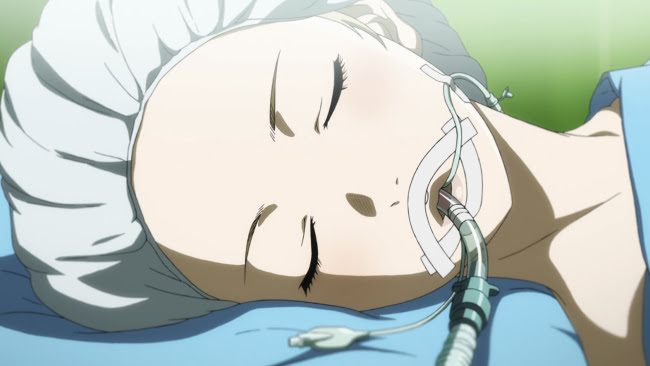 TvTropes.org calls it Soap Opera Disease or Ill Girl, whatever the unnamed ailment is that afflicts Kaori in Your Lie in April (四月は君の嘘), a series I finished watching yesterday. Roger Ebert's Glossary of Movie Terms is on TvTropes.org and his "Ali MacGraw's Diseased" is referenced in the Ill Girl entry: "Movie illness in which the only symptom is that the sufferer grows more beautiful as death approaches. (Named for Love Story, which MacGraw stars in.)" It's hard to say if that's true of Kaori whom the artists make sure is perfect looking from the beginning to the end of this over-long melodrama. 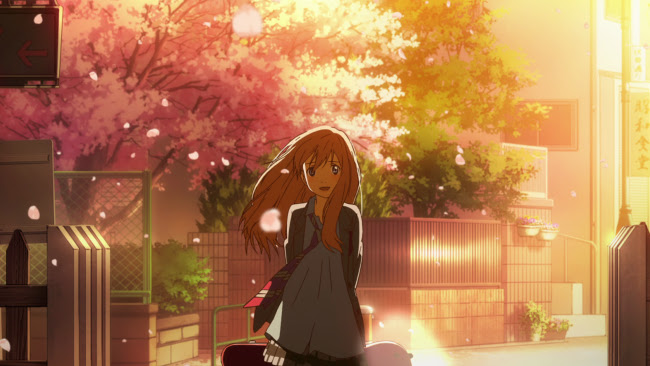 They really should have quit while they were somewhat ahead. Halfway through, the show had been an interesting story about what motivates some creative people and a tamer version of Evangelion's psychological character drama. The second half of the series dully treads water, rehashing more of Evangelion with what seems to be unselfconscious irony, practically tracing over the animation frames from End of Evangelion in order to demonstrate that they've completely missed the message of End of Evangelion. Or the makers of Shigatsu wa Kimi no Uso simply don't mind making exactly the sort of pandering ego wank for boys Evangelion was criticising. 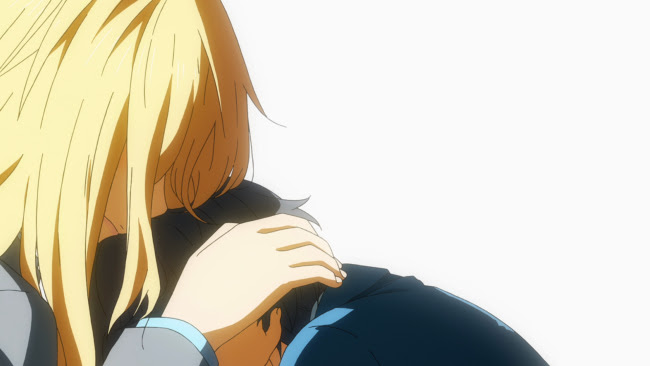 Kosei, who is basically Shinji at this point, is shockingly found curled up in foetal position in his room instead of practising on the piano for the big competition. He's found by Hiroko, his tutor, and he goes limp when she tries to drag him by the arm to practice, precisely like the scene from End of Evangelion where Misato finds Shinji in his usual foetal position and tries to drag him to his Eva. Except Hiroko doesn't kiss him to motivate him due to the curious chastity of this series. It's pretty normal for an anime series to tease the sex that never happens but this one takes the cake in contriving multiple, completely phantom reasons as to why the main characters don't get together. Supposedly Kaori and Rota are dating but while Kaori is obviously obsessed with Kosei and he's obviously into her we see nothing but occasional polite banter between Rota and Kaori. This all makes the eventual reveal for what the lie of the title "Your Lie in April" is, which I won't spoil, all the more ridiculous. 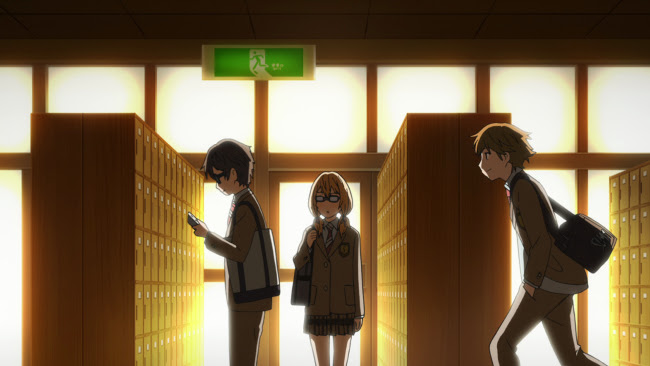 Of course, since Kosei is the central male character, every female character has to be in love with him. His childhood friend, Tsubaki, is just starting to realise it and in old Hollywood movies generally what has to happen at a time like this is the third wheel conveniently has to die by the end of the movie. Kaori's unnamed disease, the symptoms of which seem to include occasionally falling and needing dangerous, unspecified surgery, seems like it's on track to get her out of the way until the show suddenly seemed to wake up and realise it has to fill out another ten episodes. Then, suddenly there's surgery that might save her, the sudden introduction of which has the attendant unintended consequence of making Kaori look like a coward. But since the exact nature of her disease is never revealed, the writers probably figured they could do whatever they want. 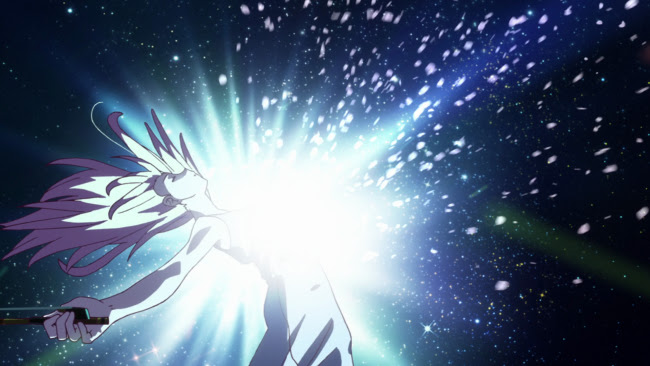 Comparing the show to Evangelion makes it all the creepier that the show ends with Kosei basically forgetting how abusive his mother was and seemingly celebrating the fact that he's in love with a girl who's basically his mother reborn and sanitised. The fact that she contrives a pointless lie to avoid consummating a relationship with him gives the story the ritual sterility of an arranged royal marriage, which is particularly pathetic given that early on the show was giving lip service to individuality and creativity. 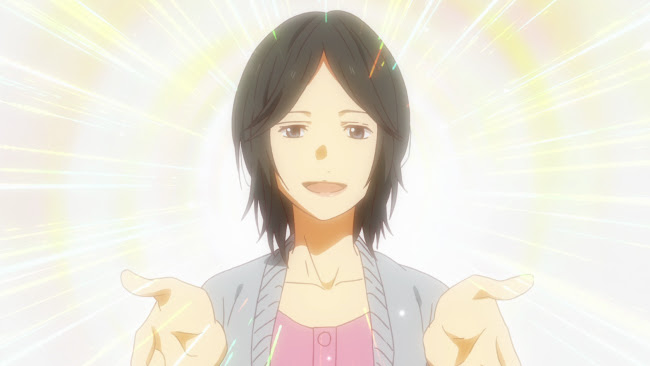 A veiled invaded egg was put to loan;
The sign was struck but twice before it lit.
When words were stretched to syllables unknown,
A deal was dreamed before the buyer bit.
A breeze like Ridley Scott condensation
Through gauze the shade of flaring suns it watched.
Concealed in sequinned drapes hesitation
Avasts a thin unarmed and angry blotch.
The angled waterfall conceals no room.
A secret known to all can sneeze at will.
The drones at last have found this Brigadoon.
It just remains to gentrify the kill.
A tuft of wool was given free for slime.
The wooden steam has straightened out the time.