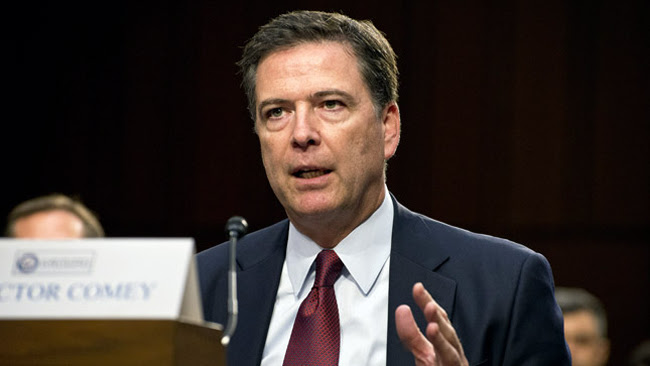 Despite he and Trump having had a "thing", James Comey didn't do Trump any favours to-day. What was the "thing" Comey quotes Trump as alluding to in one of their now infamous private conversations? Comey speculated in his testimony to-day, at the insistence of John McCain, about the "thing": "I concluded at the time, in his memory, he was searching back to our encounter at the dinner and was preparing himself to say I offered loyalty to you, you promise loyalty to me. All of a sudden, I think his memory did not happen and he pulled up short." I guess this is different from a trial where a lawyer would stand up and say, "Objection--speculative!" Speculation is fair game, it seems. It's weird how often Comey was asked to speculate, anyway.

Now, if I were to speculate about "the thing", I'd say it was Comey's announcement about investigating Clinton's e-mails shortly before election night. At the time, that was widely seen as a show of Comey's loyalty to Trump and, wouldn't you know, Clinton's e-mails were made an important part of the committee testimony to-day by Republicans who continually, awkwardly tried to steer back to the issue. Most strikingly McCain, who was so incoherent as to seem physically unwell, insisted there was a double standard simply because Comey had concluded one investigation while another was ongoing.

Of course, now it doesn't seem likely Comey was being a Trump loyalist when he made the critical announcement about the investigation of Clinton's e-mails. But everyone at the time figured he was--certainly everyone on TV. We know Trump mainly keeps himself informed on everything through cable news, much to the consternation of his National Security Advisers. So the "thing", I believe, is this narrative that Trump bought into.

For those of us who don't want the country controlled by a dimwitted creep, Comey having previously seemed to be on Trump's side may be a blessing in disguise, and I think Republicans recognise that and that's why they're trying so hard to re-write history now. Because, with these two investigations, Comey really and truly does look impartial. You can see this is what Republicans are desperately afraid of and that's why they put out the hastily assembled, bizarrely campaign-like attack ads on Comey which seem to say little more than that Comey is politically biased. And has always been biased. Well, fortunately this isn't 1984 and you can't make people forget the narrative from six months ago with a hokey piece of propaganda. At least I hope not.

The Republican loyalty to Trump is really strange at this point. There's something more to it than partisanship. With all the Republicans who came out publicly against him before the election and what, one would think, is the more attractive prospect of a Pence presidency--and the political capital to be gained from pursuing criminal charges against Trump and thereby seeming bipartisan--you'd think all the Republicans on the committee wouldn't be so lock-step. Particularly McCain who's been insulted by Trump and who has expressed words against the orange man. It makes the incoherence of his questions this morning all the more intriguing. I feel like McCain is being blackmailed somehow, if it isn't a medical issue.

Without a proper president right now, it occurred to me that the U.S. feels sort of headless. Then I thought, like The Headless Horseman--and Trump's the pumpkin.

Posted by Setsuled at 6:26 PM
Email ThisBlogThis!Share to TwitterShare to FacebookShare to Pinterest