Back to the Bang Bang and the RR 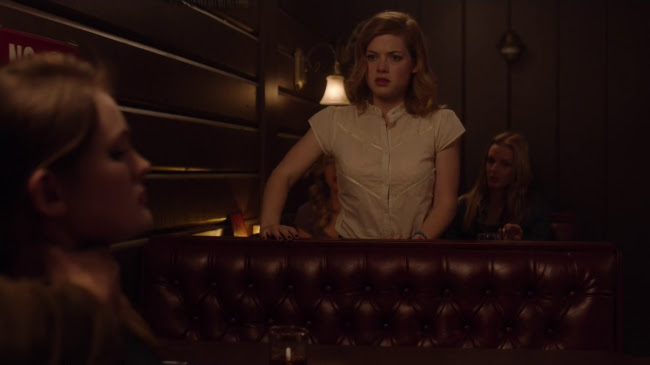 Twin Peaks took a turn for the melancholy in last night's new episode. So far it's been mainly intriguing weirdness but with last night's episode the show subtly shifted focus to the emotional state of victims.

We've now had essentially a five hour David Lynch movie and I can't believe there's more to come. I marvel at the consistency in filmmaking quality and it's so refreshing to have a show that never for a moment assumes I'm stupid. 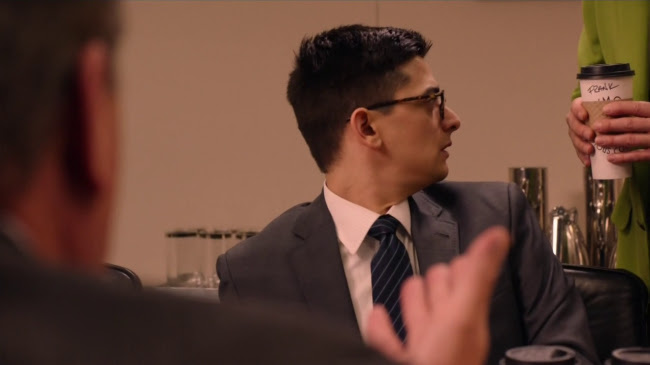 For instance, I liked how Lynch never cut to a close-up of the cup Cooper (Kyle MacLachlan) is holding to explain how Frank (Bob Stephenson) knows that was his coffee. If Lynch didn't have final cut on these, I guarantee some busybody at some point would have said, "No, we have to make it super fucking clear for the morons at home." 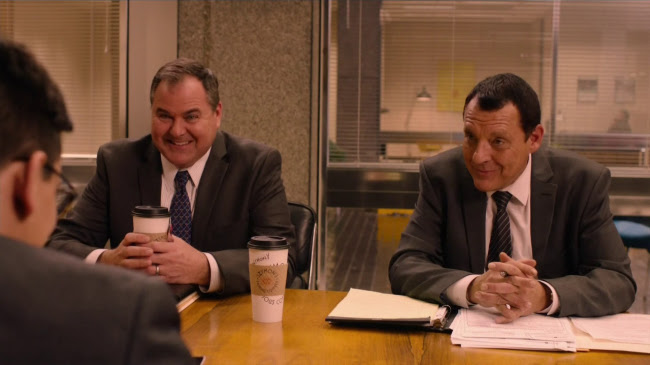 I love watching Frank discover he really likes the green tea latte. Such a small, kind of adorable moment. I'm continually amazed how much attention to detail there is on the show, how Lynch just keeps putting together interesting shots. Look at this shot of the Drugged-Out Mother (Hailey Gates)--yes, that's the character's name in the credits. 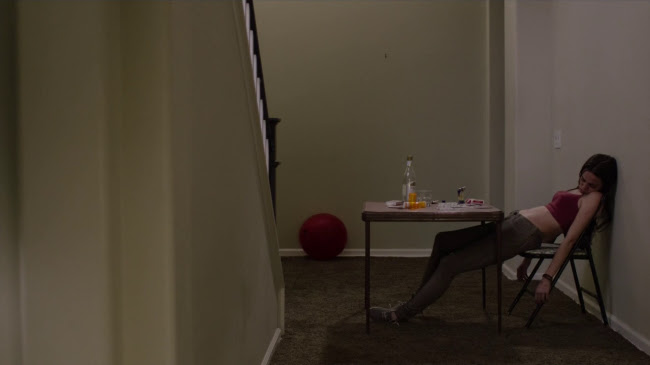 At some point Lynch or his cinematographer, Peter Deming, said, we need a big red ball in the background to go with her top. Almost everything in her house is grey, red, white, or brown. Her poor kid's shirt is somehow sad and perfect. 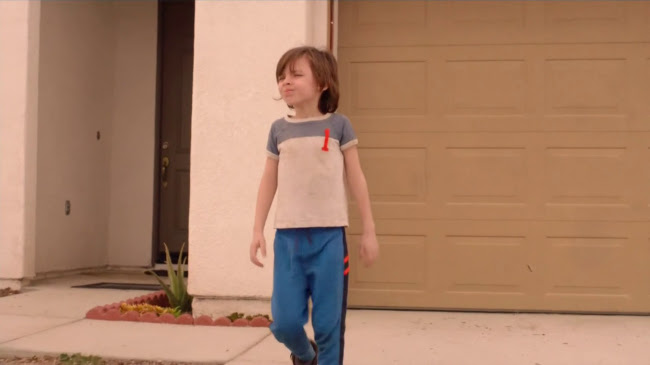 We also have another sad moment for a kid when Cooper inexplicably sheds a tear for Sonny Jim sitting in the back of the car. Why? Because he knows the kid's father is gone, probably forever? That his father was only some kind of manufactured decoy? 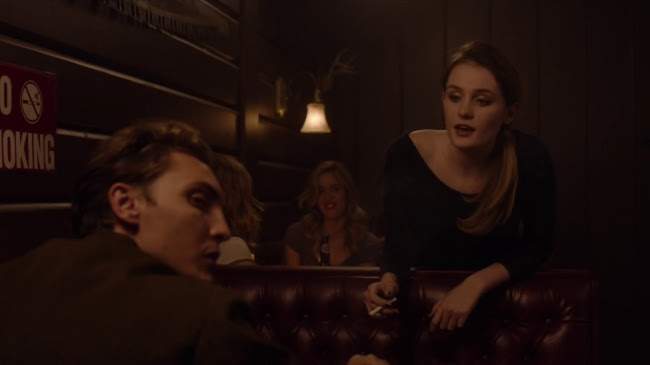 Going to older children, I loved the scene in the Bang Bang Bar where the sinister guy toys with the teenage girls making eyes at him. It's so horrible--credibly horrible. Nowadays every kid on TV has to be a wiseass but you can see these girls really are kids, just getting a little excited by the guy who's breaking the rules by smoking a cigarette, and one of them, Charlotte (Grace Victoria Cox), takes a risk and immediately gets in over her head. It's both an unusually human moment and a classic Twin Peaks moment. 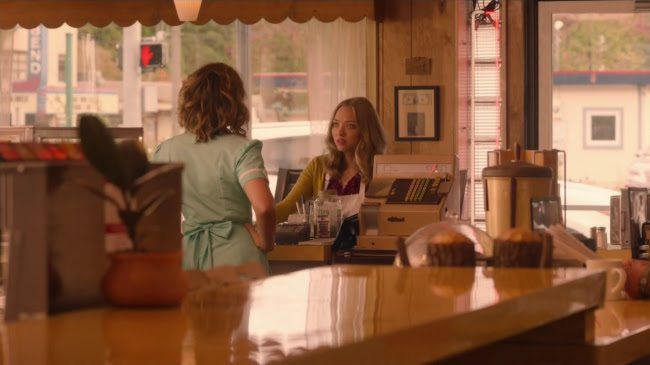 We finally get a scene in the RR and we finally meet Amanda Seyfried's character, Becky, apparently someone close to Shelly (Madchen Amick). Wikipedia says she's Shelly's daughter but I'm not sure we know that. It's hard to hear Becky and Shelly's conversation, maybe she called her "Mom" and I didn't hear it. My impression was that Shelly and Becky had developed a relationship somewhat like Shelly and Norma's (Peggy Lipton). Becky's last name in the credits is "Burnett", as is the guy she's with, the really skeevy looking Steven (Caleb Landry Jones) so I guess she's actually married to him. I guess he's not as bad as Leo but that's not saying much. 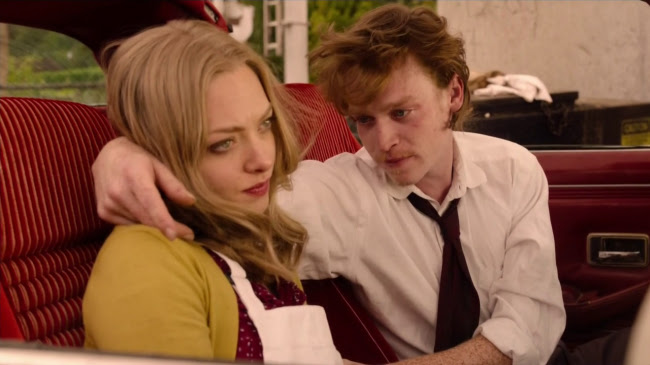 The RR scene is the closest to the kind of scene I might've predicted seeing in a new Twin Peaks series. It's obviously meant to resemble the scene in the pilot where Norma watches Shelly and Bobby outside in Bobby's car. How nice it is that this time Lynch was able to shoot entirely with the location RR instead of using an L.A. soundstage for the interior, allowing for that interplay between interior and exterior.

I like Amanda Seyfried, I look forward to seeing where Lynch takes her. Since Leland asked Cooper to look for his daughter, I've wondered if maybe Seyfried was going to be playing a reincarnation of Laura Palmer. With the cocaine and the bad boyfriend, or husband, she does seem Laura Palmer-ish, though she doesn't seem as self-possessed as Laura. 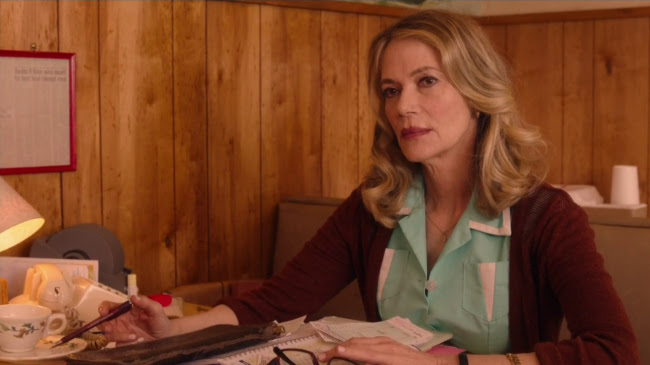 Age seems to have given Peggy Lipton a more elastic face and I loved how Lynch shot Becky's introduction from Norma's point of view, allowing us to discover the character alongside Norma trying to figure out the situation from a distance. 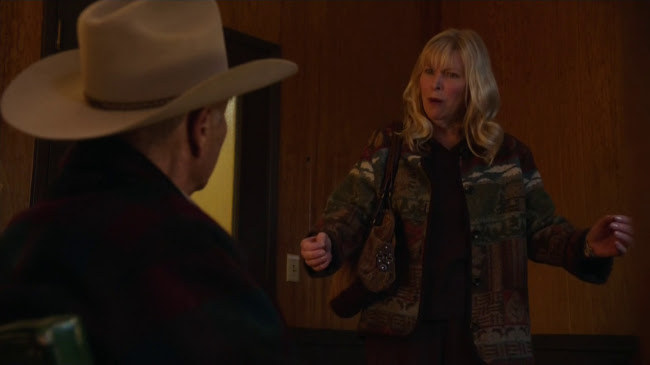 Poor Frank Truman (Robert Forster)--I guess his marriage isn't quite as bad as Becky's but I did feel bad for the guy. His wife, Doris (Candy Clark), is in the mould of Laura Dern's mother in Wild at Heart though maybe not quite as sinister. The things she's complaining about aren't really that unreasonable--she doesn't want to stand around watching a bucket all day--but her anger is dialled up way further than the occasion calls for. I love how Lynch shoots her from a low angle, raising her arms to the heavens when she says, "black mould!" with Frank Truman seeming to shrink in his chair from the opposite angle. 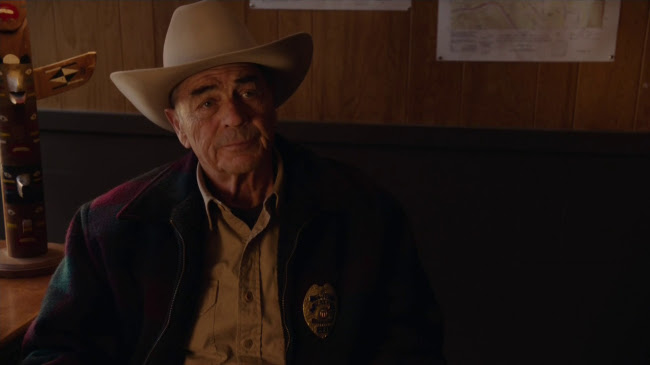 Poor Cooper, still hardly himself in that ugly lime green sport coat and stranded next to that statue he seems to take a liking to, providing an improbably perfect Lynchian composition even for something directed by David Lynch. 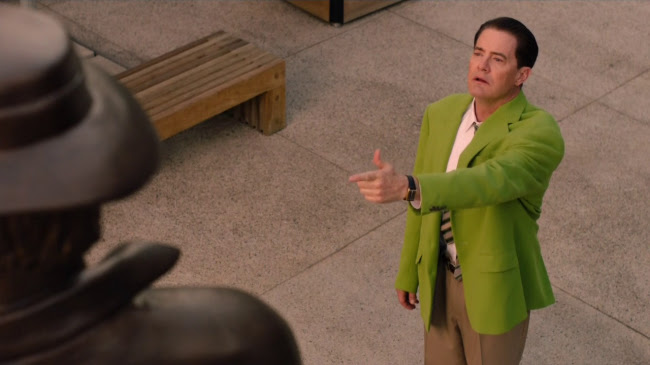 I guess I can't write about this show all day. Sunday seems too far away . . .

Posted by Setsuled at 4:35 PM
Email ThisBlogThis!Share to TwitterShare to FacebookShare to Pinterest