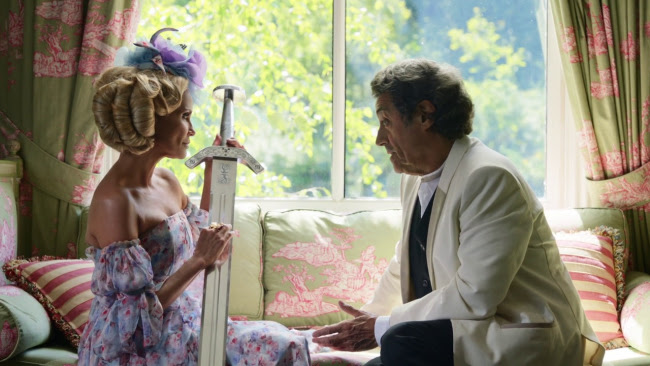 What an incredibly pretty season finale of American Gods. Directed by Floria Sigismondi, who I first heard of in the 90s when she made Marilyn Manson music videos, this Eastery Easter episode was about as far from Antichrist Superstar as you could get. 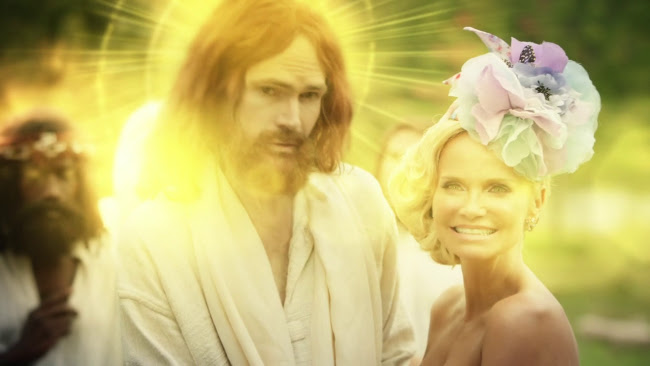 Because there's a lot of Christ in this episode. Or I should say Christs, a pretty effective visual gag. Conversations between Wednesday (Ian McShane) and Easter (Kristin Chenoweth) tended to drift into too much exposition--again giving me the feeling that many of these episodes would have been better stretched over multiple episodes--but Easter entertaining a gaggle of Jesuses, crestfallen at the suggestion they've appropriated her holiday, was pretty funny. 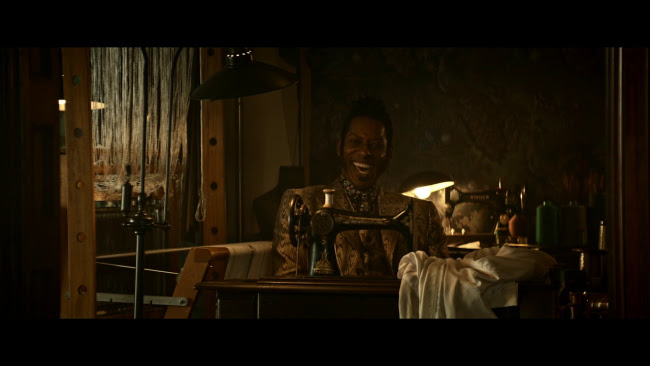 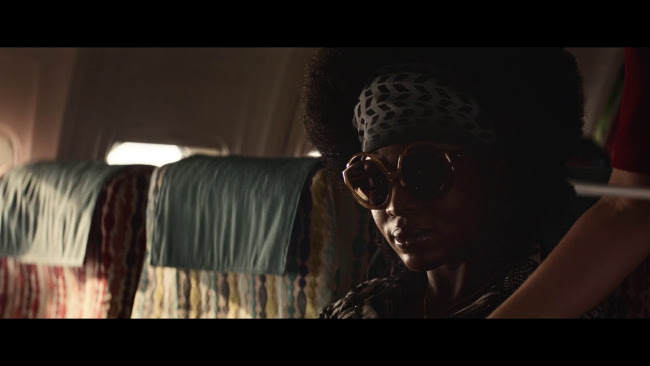 So she's not the American version of Bilquis/Sheba? Or maybe American versions of gods retain memories from the old country and she's remembering those? But we see her cross in an airplane. Well, I guess it's not like anyone worshipped Bilquis in the U.S. so maybe she'd have to be the one from the middle east. I really like the fact that her story makes us feel for her even though she's basically a murderer. I guess she's essentially a vampire character. 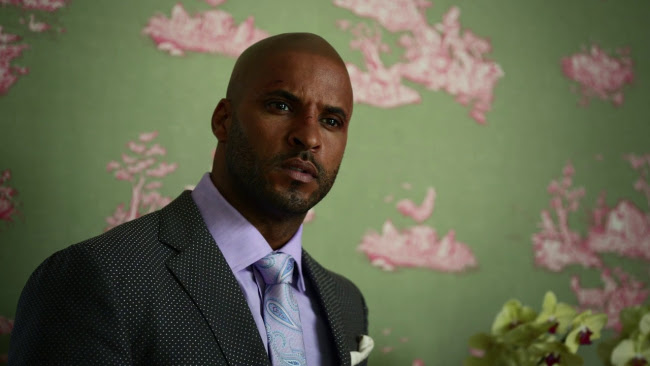 Nancy turns out to have a great sense of personal style and he's a great tailor. I really liked Shadow's outfit, the paisley tie that almost blends in with his lavender shirt and the grey with white polka dots jacket. 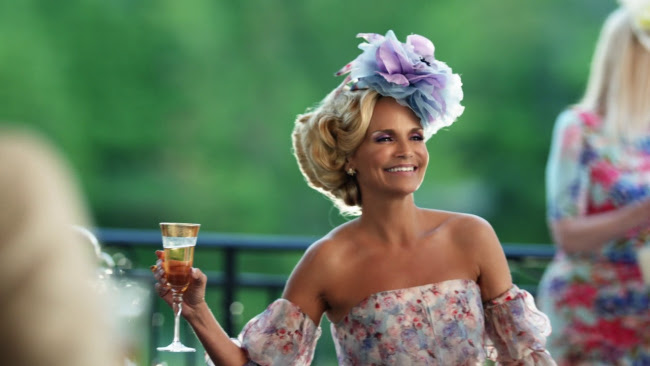 Chenoweth's costumes are lovely, too, though I wish her shoes had gotten one lingering close-up--I didn't notice them until I was taking screenshots but they're fantastic monsters: 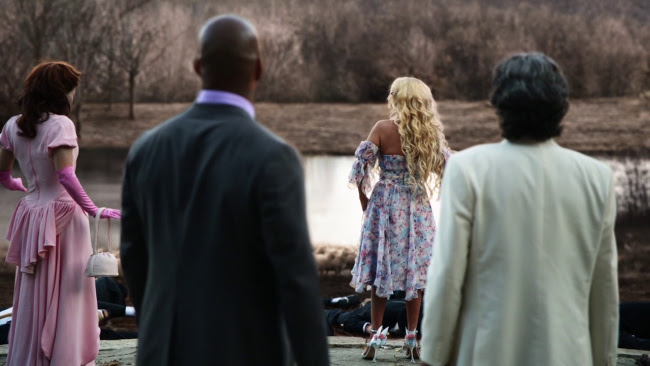 In addition to all the prettiness, Laura (Emily Browning) is looking more impressively dead. I love the aviator glasses with the red jacket and those murky contact lenses look really convincingly corpse-like. 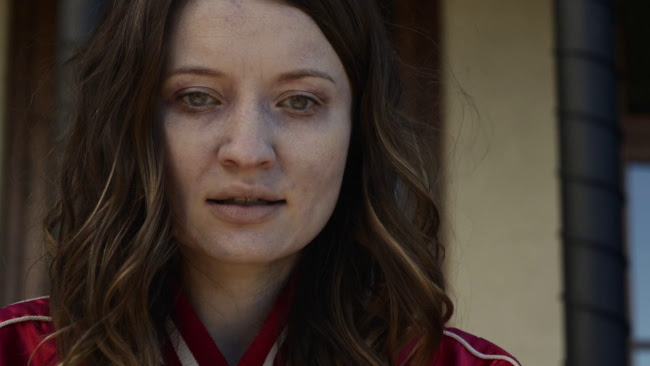 Laura and Mad Sweeney (Pablo Schreiber) are really standing out on this series while Shadow is increasingly feeling like a minor character. Laura finds out that a god has been working against her all along, that she's been a pawn in Wednesday's game, while Shadow's big revelation is that he actually believes in the lightning bolts he just witnessed. Laura's story is a lot more interesting at this point but maybe that's a good way to stretch the story out over several seasons, letting Shadow slowly accrue issues. 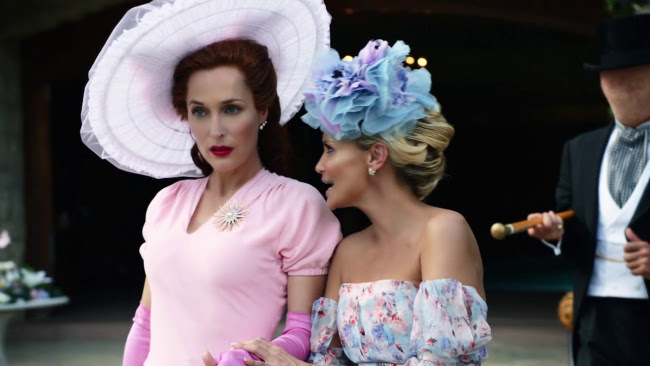 My favourite outfit was Media's (Gillian Anderson). I'm not sure if she's based on any media figure--Joan Crawford, maybe? But she seemed to be glowing in those colours.

EDIT: A lot of people (felisdemens on Live Journal was first) are pointing out to me that Media's look is based Judy Garland's at the end of Easter Parade. I'm not sure I'd have guessed even if I had seen the movie more recently. On my DVD the colours are a bit different and they vary even more widely in a Google image search. Probably a sign this movie needs some restoration work. Garland's dress looks almost blue in the outdoor scenes on my DVD while Anderson's is unmistakeably pink. 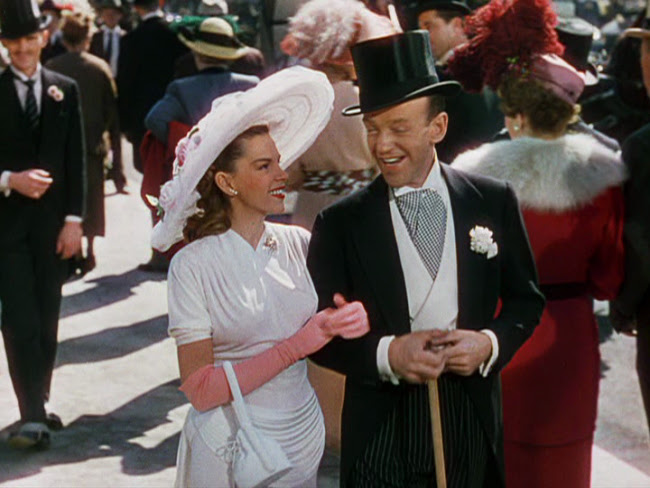 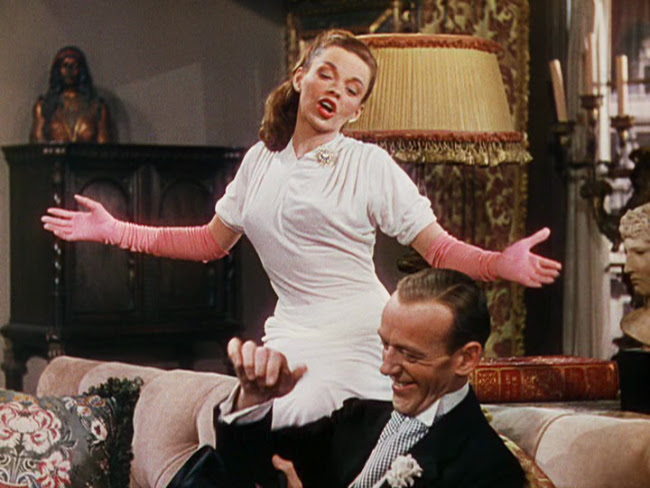 In turquoise scarves the marching men dissolve.
The branching fingers tune the blizzard late.
And so in pledging trees the eyes resolve.
The drying lashes turn to feathered gate.
In armoured pages knights misplace a spine.
In gliding boughs, the feathered bark arose.
In perforations dark the ants align.
And still the oldest roots are making clothes.
Embankment clerks assume the stony pen.
Abandoned carts abridge the market lane.
As stores are shrinking gulls adjust to win.
The river's air cajoled the weather vane.
A kiwi grew to break a smoothie town.
A hobbit stretched to talk the Entwives round.