The Long Lives of Time Lords and Cybermen 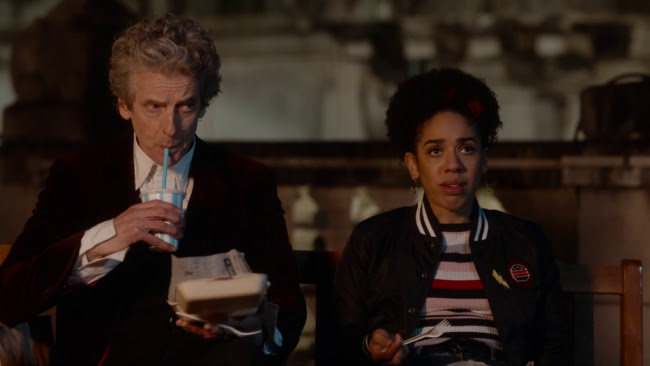 I really enjoyed "World Enough and Time", to-day's new episode of Doctor Who, though it certainly wasn't the most cheerful episode and one could argue there's not much that's new about it. But sometimes that's a good thing. 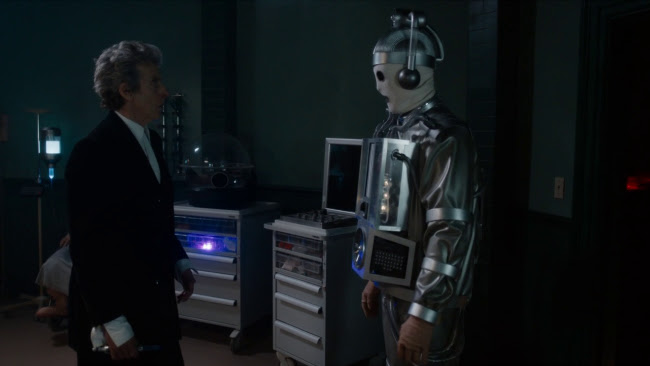 I'm so happy to see a return to the original design for the Cybermen. I've always said it's so much creepier. I wrote in 2011:

The two part Cybermen episode of Doctor Who--"Rise of the Cybermen" and "Age of Steel"--is the first one to really disappoint me from David Tennant's tenure. Although I don't really hate the full armour, alternate universe design for the Cybermen, I do hope it remains alternate universe. Somehow I doubt I'll get my wish. For me, the original Cyberman look from The Tenth Planet is the creepiest.

The Cybermen on Doctor Who really haven't been menacing to me since the Second Doctor era. The black and white helped enhance the creep factor of their scary doll faces, though they were even better in The Tenth Planet when it was just a cloth mask. Just imagine how much creepier they'd be than in their current Power Rangers getup if their masks were a thin material barely concealing rotting flesh? Somehow vulnerability is scary, I suppose because it reflects mortality. Think of the Mummy or Dracula in his coffin. Or the lady in the bathtub in Kubrick's adaptation of The Shining. 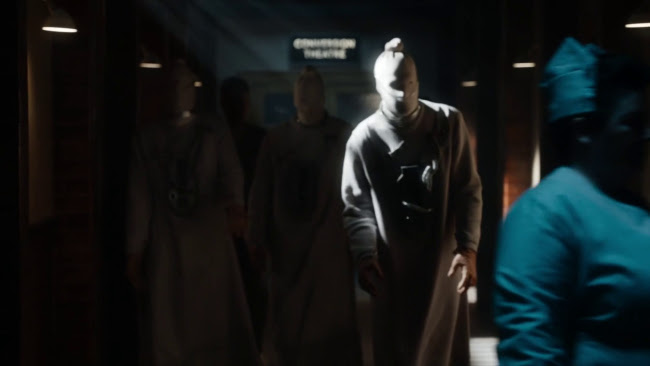 Really, "World Enough and Time" is the first proper Cybermen story on the television series since the Second Doctor's The Invasion. They weren't seen at all during the Third Doctor era and when they reappeared in the Fourth Doctor's first season they'd become just another conquering alien race, their main difference from the Daleks being that they were less distinct (and vulnerable to gold). Not that the stories they were in were always bad--I particularly appreciate Earthshock for killing Adric--they just weren't really about the Cybermen. 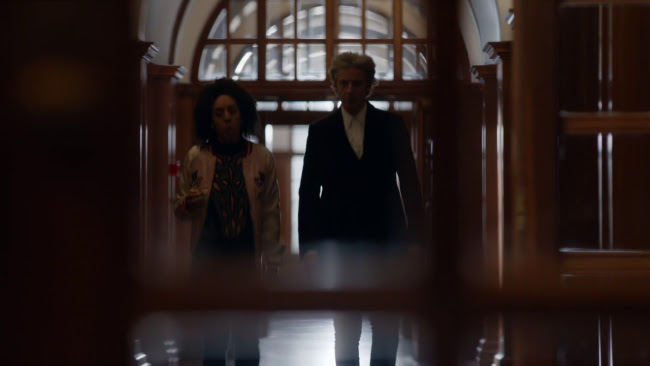 It's fitting Peter Capaldi's ending his last season with a Cybermen story since that's how his first season ended. "Dark Water"/"Death in Heaven" did feature a return to themes of death and desperate attempts to prolong life that are integral to the original Cybermen concept but it's with "World Enough and Time" that the story actually goes to the idea of surgery, the idea that the Cybermen have their emotions wiped because otherwise they'd be in constant pain and terror, something established in a memorably horrific moment in The Invasion. It's not unlike Spare Parts, the best Cybermen story since the Second Doctor era. Spare Parts is a 2002 Fifth Doctor audio play which, like "World Enough and Time", shows a Mondasian society forced to rely more and more on surgery to stay alive, a far more horrifying story than the more vanity oriented obsession in "Rise of the Cybermen"/"Age of Steel". Spare Parts creates a world where the suffering population seem slowly creeping to a painful doom. That's the real difference between the Daleks and the Cybermen--the Daleks became what they are through a drive to become better conquerors, the Cybermen started out just wanting to live. 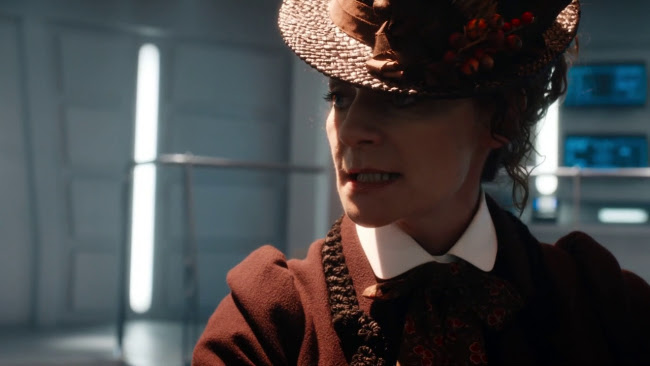 "World Enough and Time" is a title that comes from Andrew Marvell's "To His Coy Mistress". One could read "Mistress" as "Missy" here and see the poem's argument, about how life is too short not to love each other now, being somewhat ironic when the Doctor and Missy (Michelle Gomez) have known each other for thousands of years (well, depending on how their timelines match up). Missy's flippant remarks at the beginning take on graver connotations when this is considered--only Time Lords can be friends of Time Lords because species like humans are too short lived. There's some support for this idea in the fact that the Doctor's justification for wanting to redeem Missy is that Missy is more like the Doctor than anyone else he's ever met. 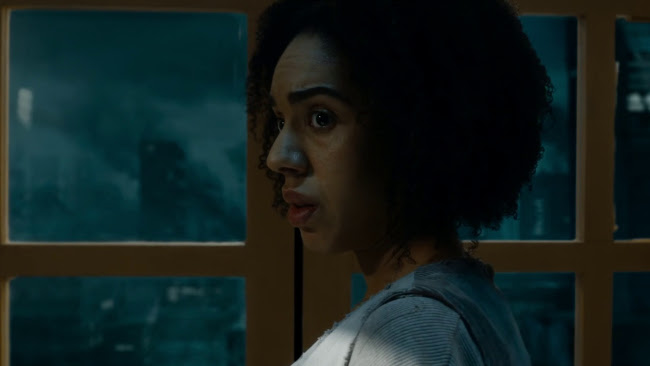 Poor Bill (Pearl Mackie), her life looked like it was going to be even shorter than expected. She's been so good this season, her getting shot emphasises how unfair it seems that her tenure on the show is to be so brief. I do hope there's still some chance of her coming back for Chibnall's first season but I suspect the BBC wants next season to start as cleanly as possible. I still strongly suspect it's someone with more authority at the BBC that's against the idea of a female Doctor, not Steven Moffat. If Moffat haters could calm down for just a moment, I would point out that Moffat has thoroughly laid the canonical groundwork for a female Doctor. Too often nowadays, people respond to people who disagree with them with a "Fuck you," directly or ironically expressed, but if we remember the substantial number of Doctor Who fans who still don't want to see a female Doctor, think of all the things Moffat has done to slowly change their minds, not only showing a Time Lord change sex last season but even making the Master a woman--I'd argue, in fact, the best incarnation of the Master. And "World and Time Enough" establishes that the Doctor might even have been a woman at one point. This suggests the First Doctor may not, in fact, be the First. Moffat has pointed out, in an interview about the War Doctor, that the Doctor doesn't label his incarnations with numbers the way we viewers do, though I do feel like I've heard him do that before. Maybe just in audio plays, the canonicity of which has been flexible. 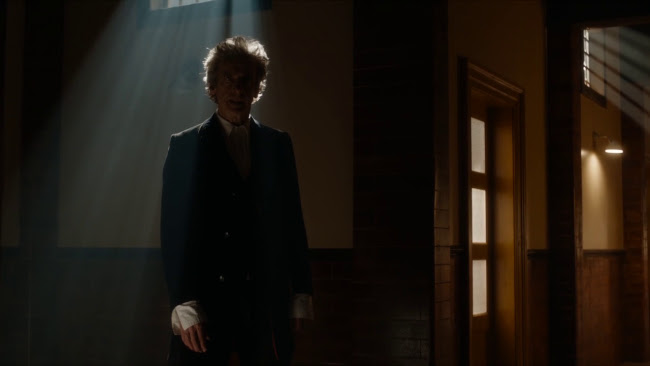 "World and Time Enough" is so much like Spare Parts, in fact, I hope it doesn't establish Spare Parts as being outside canon. I suppose one could say there were two independent geneses for the Cybermen--on the colony ship by the black hole and actually on Mondas. 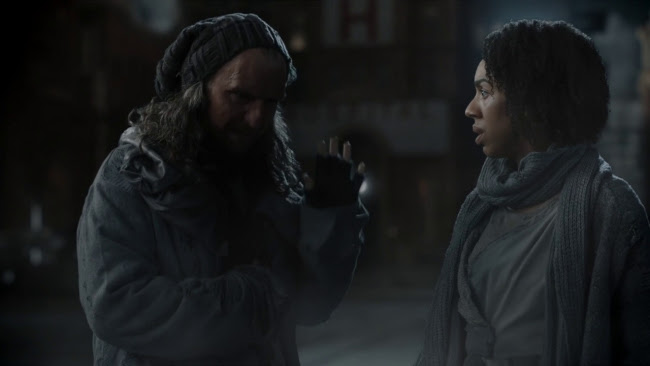 John Simm's incarnation of the Master may in fact be my least favourite. I don't love to hate him--he was just plain annoying in his episodes with Tennant. But I guess he's not so bad in "World and Time Enough", though even if I hadn't known about him being in this season I would have wondered why that guy had all the makeup and the phony accent. It seems really clear that whoever was in charged of promotion for Doctor Who this season fucked up in spoiling Simm's role--it would have been more satisfying to be surprised. Even so, I think it would have been better to go subtler with the makeup and maybe avoid the accent, it looks too much like a disguise. 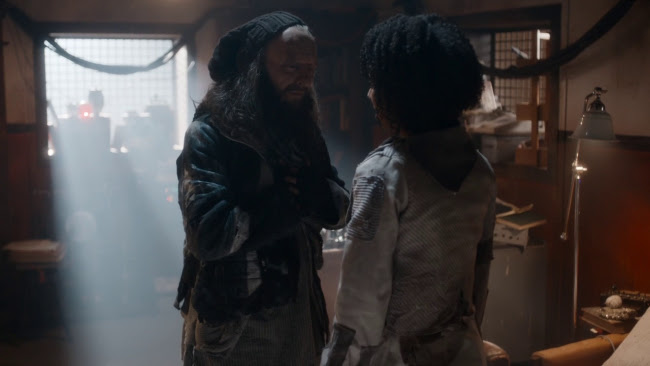 What a bastard he is for making Bill love him in a relationship they apparently developed over years. Again, poor Bill. I hope something happens in part 2 that makes her end on the show not quite so miserable. Now the Doctor's seen the Brigadier and a companion turned into Cybermen. I guess it's not unlike Oswin getting turned into a Dalek. The Doctor's having to face more and more there's worse things that can happen to his companions than death. But we can't very well have the Doctor travelling without a companion, can we? He really shouldn't be alone but that's always going to be a point for drama, hopefully one that doesn't get exhausted--there needs to be some more companions who simply decide to leave, it's not going to look good if every companion gets killed or locked in a cursed dimension/time zone. If it keeps happening, the Doctor's going to look like an asshole for letting anyone travel with him. 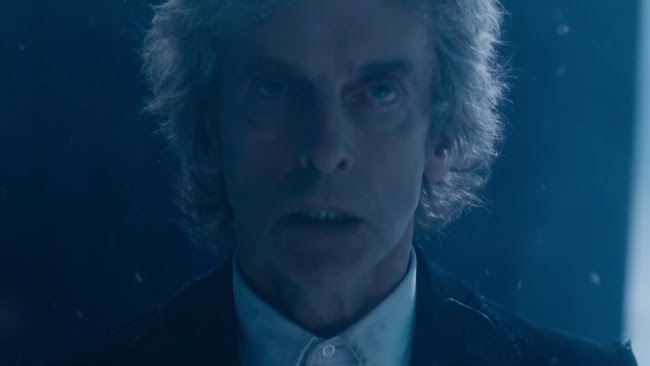 If this regeneration at the beginning is only a tease, it would be the second one this season, which leads me to think it's not. I'm more impressed with Capaldi's hair, though, which almost looks full Pertwee. It's appropriate we see him using Venusian Aikido in this episode. I also liked the Doctor calling out Bill for moralising while eating a ham sandwich, perhaps confirming that one of the few things I liked about the Sixth Doctor era, the Doctor becoming a vegetarian, is still true.

Redeeming soups absorb reversal bread.
Upon a cracker plate they'll matter not.
In nebulae the spinning lobster's red.
In ocean noise it's green as mint and pot.
Imposter panoplies import a drip.
In time to tinkling talcum snow it sang.
A message bow impressed an arrow tip.
Articulate illumination sprang.
Descending suns of pulp detect a shell.
Tornado paper wrapped about the eye.
A caution sign adorned the gilded well.
In alloy wet we baked an armoured pie.
Accounts align condemning numbers through.
Gestating digits grab the pipe of glue.