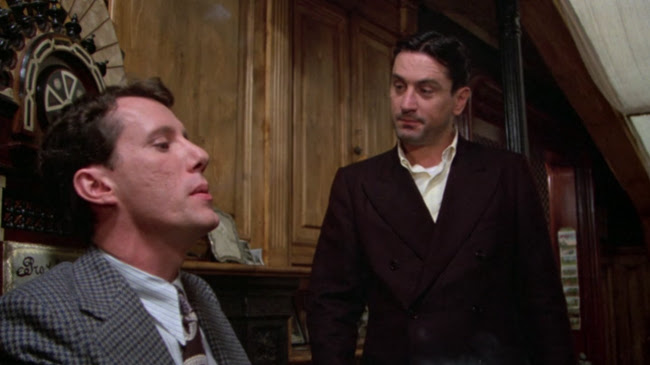 In light of the frighteningly polarised political landscape in the U.S. to-day, it's strange to think there's a movie from 1984 called Once Upon a Time in America that starred Robert De Niro and James Woods as best friends. In 2018, De Niro has been targeted by a mail bomber for publicly denouncing President Trump and Woods' support of Trump has seen him reposting right wing conspiracy theories on Twitter, including a claim that the bombs were hoaxes. But that's not all that makes the film a freshly compelling commentary on America. Director Sergio Leone made a beautiful picture, visually and thematically; it's a subtle tragedy about the American love for independence gone wrong. 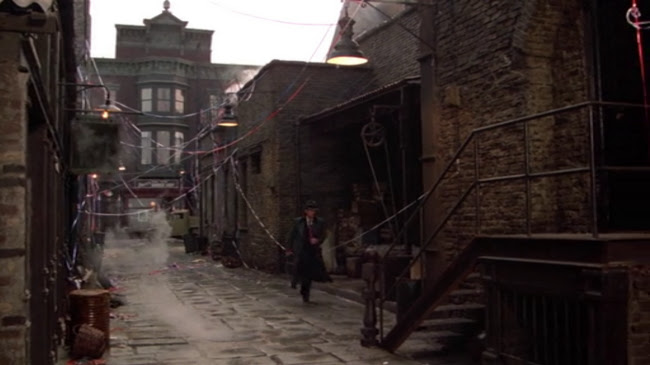 The story of a group of poor kids in New York who become gangsters feels in some ways like an extended version of the flashbacks in The Godfather Part II. Instead of Vito Corleone, Robert De Niro plays David "Noodles" Aaronson--Noodles is played by an intense kid named Scott Tiler when he's younger. Tiler looks a bit more like Al Pacino, if you ask me. 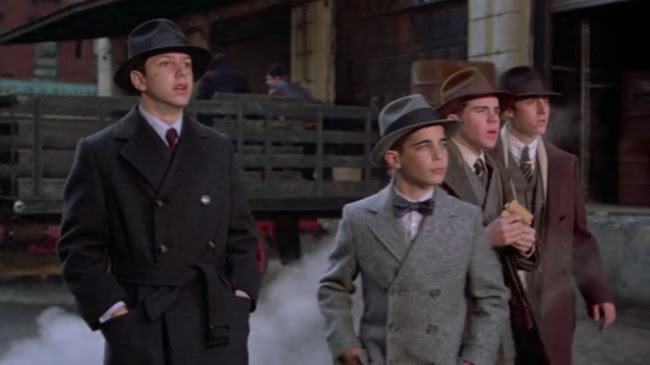 The film is surprisingly frank about the formative sexual experiences of Noodles and his friends. There's a girl named Peggy (Julie Cohen) who trades sexual favours with the boys for pastries. The scene where she's introduced, when Noodles leaves the door unlocked on purpose while he's on the toilet and she walks in, effectively establishes the curiosity and insecurity of both kids. A later scene, where Noodles and Max catch a cop in a compromising situation with a prostitute, shows neither boy can perform sexually in a way that matches up with his bragging. 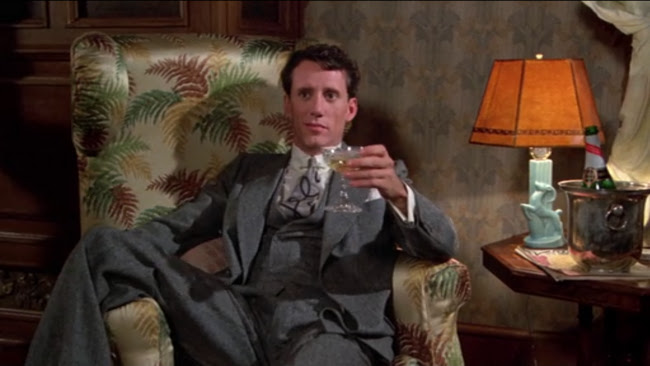 Max is the character played by Woods in the scenes where he's older--young Max is played by Rusty Jacobs with visible acne; a nice touch, I thought, to establish Woods' pock marks. In any case, with the uniform perfect skin in movies to-day, it's always nice to check in with the reality in 70s and early 80s films. 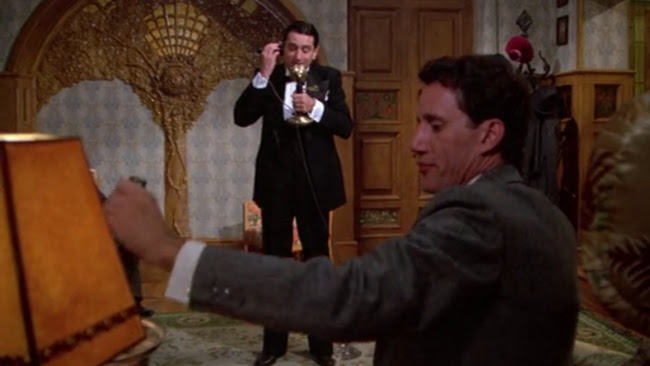 Max is slightly older, or at any rate taller, and more ambitious than Noodles. Woods has banner art from Once Upon a Time in America on his Twitter page now making me wonder if he feels Max's involvement with unions and eventual success in politics fits the model of a modern Democrat. One could as easily compare him to Trump, though--really, more easily, as Trump's real estate schemes and courting of blue collar votes combine to make him look especially like a gangster--his tacky personal style sealing the deal. 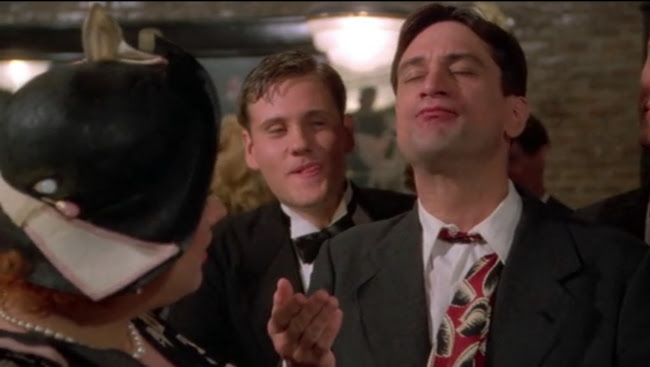 Noodles is accused by Max of having too much of the street in him--Noodles is happy to stay out of politics. Since most of the movie is from his point of view, he's relatively quiet, and he wants to stay small time, the viewer feels naturally compelled to see him as a moral centre but Leone's telling a more complicated story than that. Noodles assaults men and women to get his way. We understand why he is the way he is well enough to empathise with him--when he goes too far, it's saddening more than repulsive. We understand what motivates him, we see how his simple understanding of the world came together on the streets, learning from petty crimes and peep holes to get what he wants quick. The only question is if he really has any choice and this question is generally posed in scenes between Noodles and Deborah. 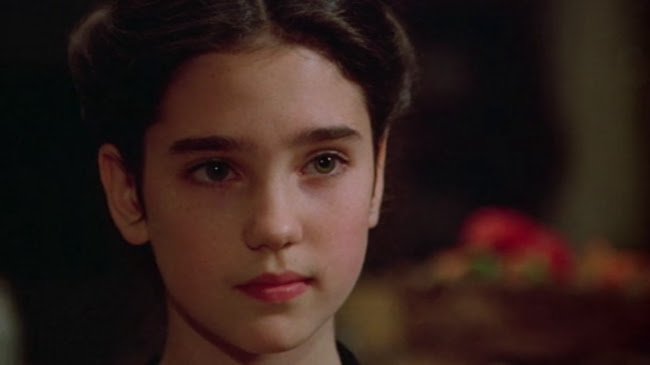 Played by Jennifer Connelly as a kid and Elizabeth McGovern as an adult, she seems to present an ideal in contrast to the childish operations of the kid gangsters. He watches her through a peep hole but it's to watch her dance ballet. Not that she's a prude--when she invites him to study the bible with her it turns out she wants to read from "Song of Solomon" with him. But she's no Peggy and when Max calls him away she makes it clear he's choosing between two worlds. Will he choose a path that forces him to consider others or a path where he forces everyone to defer to him? 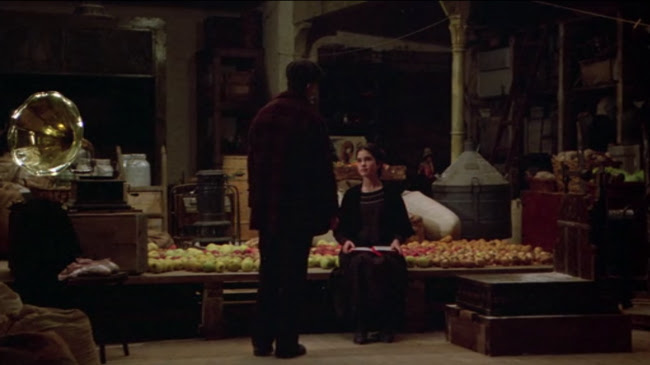 I love all the apples and pears behind her in the scene. 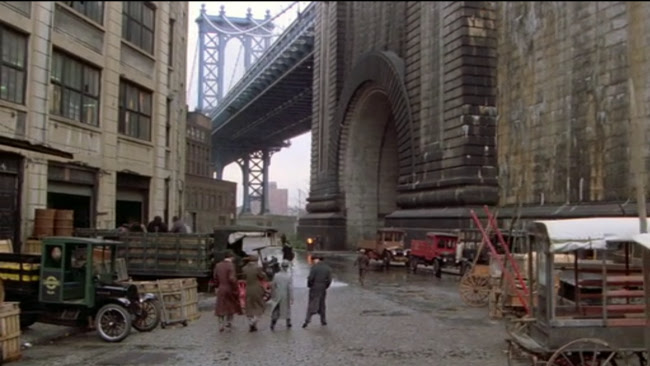 Ennio Morricone's beautiful score has some of the grand wistfulness of the one he composed for Once Upon a Time in the West, his main theme playing at times that at first seem inappropriate. But the big, sweeping melody playing over a kid compulsively eating the éclair he'd bought for Peggy and that same melody playing over the aftermath of a rape scene later in the film unify the commonplace with the horrific. There are all these stupid, silly, terrible, beautiful, and ugly pieces under this same melody. The exact same recording in one scene that seems to celebrate what is will in another scene lament what has been lost. The story’s not linear—we get shots of older Noodles in the 70s at the beginning of the film and scenes from the 20s and 30s mixed with the 10s and 70s throughout. What’s lost becomes suddenly present again and then lost again in a moment with a closeup of De Nero’s eyes.

Posted by Setsuled at 4:41 PM
Email ThisBlogThis!Share to TwitterShare to FacebookShare to Pinterest
Labels: ennio morricone, james woods, movies, once upon a time in america, robert de niro, sergio leone