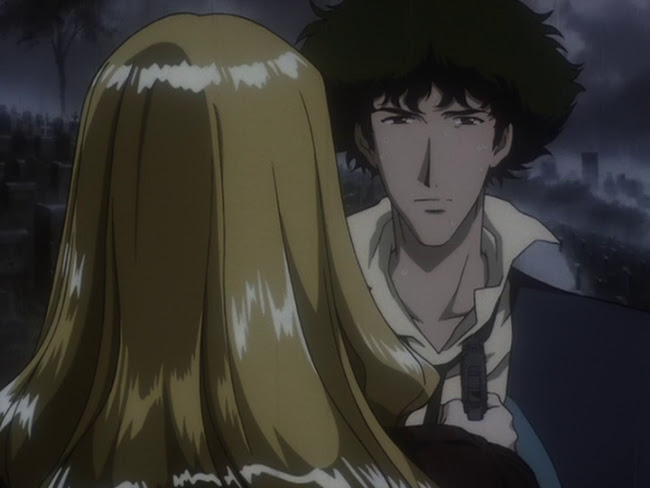 In the final episode of Cowboy Bebop we suddenly find ourselves in a very long story established in a very brief space of time. There were hints to and reflections of it throughout the series but all those elements come together finally in a single piece presenting a completion in the final episode simultaneously terribly sad and strangely, deeply satisfying. 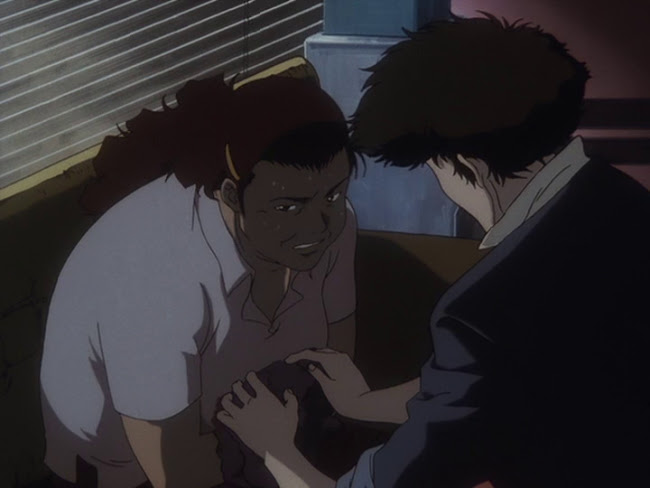 "Everyone has lost sense of where they want to be . . . Just like kites with no strings." Annie (Miyuki Ichijo), a character reintroduced in this episode, someone from Spike's (Koichi Yamadera) past, says this in reference to Spike's old society of friends and colleagues in the syndicate, but she could as well be talking about Faye (Megumi Hayashibara). Despite Spike's positioning as the central figure, Faye has surprisingly become the closest to being the show's main character by the end. 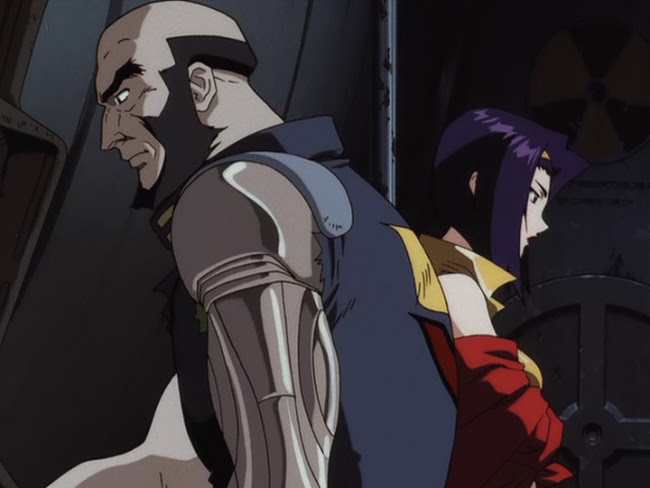 Jet (Unsho Ishizuka), as usual, is having trouble acknowledging the love he has for his shipmates, telling Faye angrily it's Spike's business if he goes off on his own. But he finally asks her what kind of woman Julia (Gara Takashima) was. And what Faye tells him has enormous meaning now for Faye; "A normal woman . . ." she says; "普通の女よ." . . . "A beautiful, dangerous but normal woman that you can't leave alone . . ." The last thing Faye is is a normal woman. At one time, she didn't mind so much. Her "Lesson" she gave us in "Toy is in the Attic", that nothing good ever happened when she trusted someone, is not something she could say now so glibly. She tells Spike in this episode that she's recovered her lost memories from the time when she was a different person but they've done her no good. She's learned the value of attachment but all of her adult life has made her a person adapted only to avoiding and occasionally exploiting attachment. 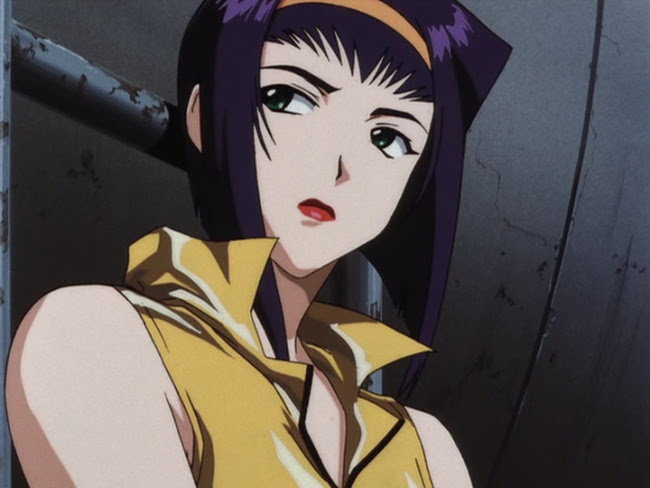 Seeking attachment is arguably anti-Buddhist as much as anti-post-modern. We return to religious imagery as Faye describes Julia as a devilish angel or an angelic demon. The worst thing about her is how compellingly normal and, oddly, innocent she is. 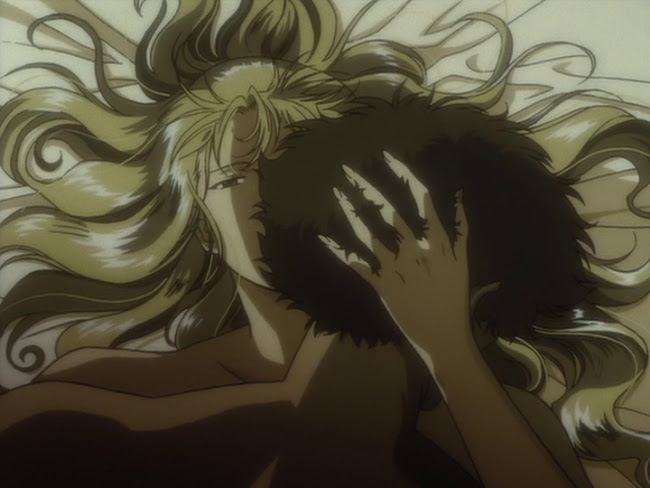 Spike adapts the idea to a fable when he meets when Jet for the last time, telling him about a couple cats who meet, fall in love, grow old and die together. But now that Julia's been killed by a stray shot that's not a story Spike can buy into. Or could he? 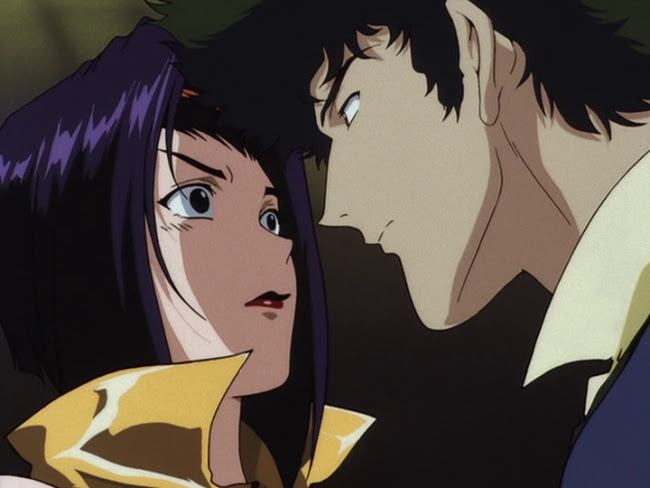 Spike and Faye's last meeting is brief but potent. She tells him the Bebop is the only place she can go back to after her desperate attempt to find the place where she used to belong. Can't this be Spike's new dream too? He tells her why it can't be and she responds, afraid; "Don't tell me things like that. You never told me anything about yourself. Don't tell me stuff like that now." Spike's old story is a new one to Faye and it's another thing that disrupts her attempt to see the Bebop as familiar, as home. More than that, it creates an arc with a foreseeable end. Like a noir, there's ambiguity about whether Spike has any choice. He talks again about how he has one artificial eye which was implanted after an "accident" years ago; "Since then, I have been seeing the past in one eye and the present in the other. I had believed that what I saw was not all of reality." 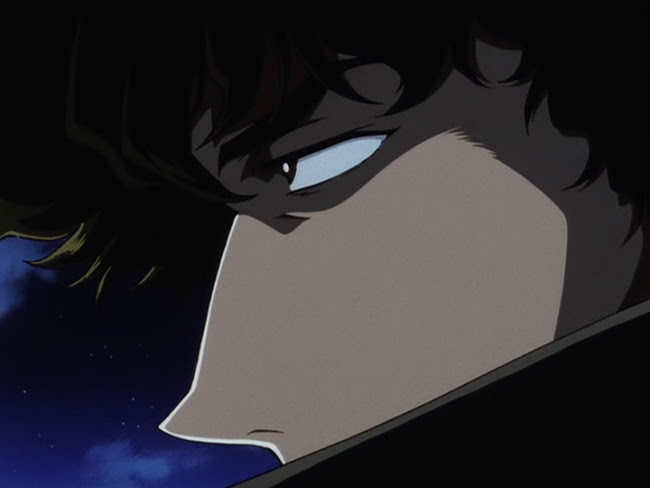 He feels himself forced into a permanently unstable state, ironically making his experience similar to Faye's, but while here's has led her to seek a new home his has compelled him to return to his past. He could never truly cast off old attachment or embrace new attachment because he was always aware of not seeing a concrete picture. Now he's going off to die for Julia and it's natural he tells Faye he's doing the opposite; "I'm not going there to die. I'm going there to see if I really am alive." Making this his story might mean his death, but at least it will mean something. That way it's heroic. But it could be tragic if you consider he might have been able to build something else with Faye. He's advised people before to forget the past; maybe therefore on some level he wishes he could.

Naturally, fans have wanted new episodes of Cowboy Bebop for years but this is one of the few classics in Japan or the U.S. that hasn't gotten a reboot or revival. I suspect largely because of how perfect the ending is--it's hard to imagine anything that wouldn't do it a disservice. But there's so much life in every episode of the series it stands as a continually rewarding closed loop, an elegant statement on change and stasis, of destruction and creation, and the complicated and tortuously ambiguous ways in which these manifest in people's lives.

This entry is the final in a series of entries I’ve written on Cowboy Bebop for its 20th anniversary. I reviewed each episode individually. My previous episode reviews can be found here:

Posted by Setsuled at 10:06 AM
Email ThisBlogThis!Share to TwitterShare to FacebookShare to Pinterest
Labels: anime, cowboy bebop, television, tv show