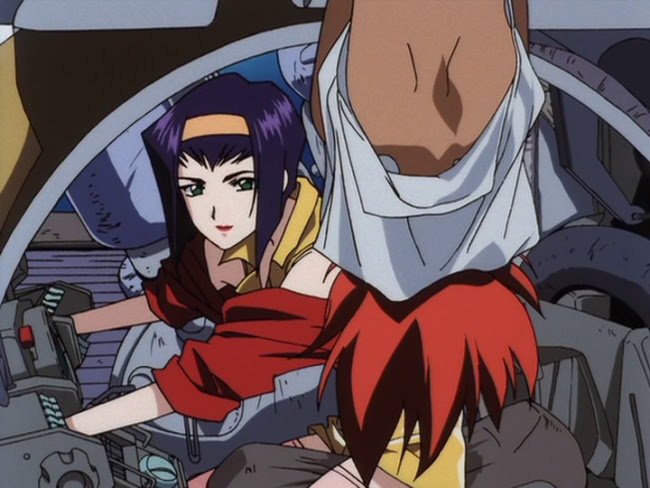 Some people might define home as any place you go to sleep at night. Most people wouldn't be satisfied by this definition--Faye Valentine from Cowboy Bebop, for one, though Edward just might. The underlying symbolic conflict of the series as a whole becomes clearer than ever before as Edward accompanies Faye in a search for the woman's home. 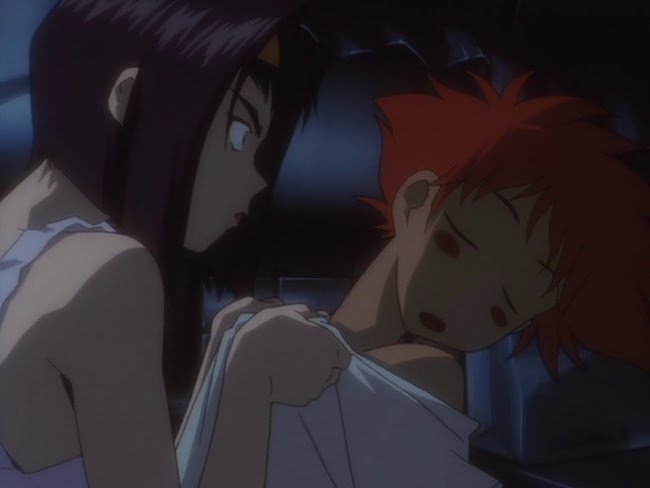 We find Faye (Megumi Hayashibara) has become obsessed with the ancient video tape of her younger self, the girl she can't remember being who lived on an Earth long gone. She's startled to find Edward (Aoi Tada) watching the video with her but is intrigued when the young girl hints she knows the location pictured in the video tape--based on a lion mermaid statue. 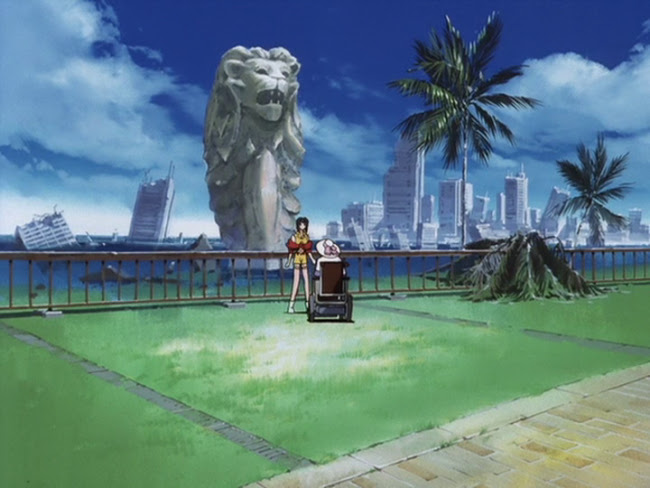 It's never mentioned on the show but this is a real statue, the famous Merlion statue in Singapore. So in this series where all symbols of culture and race are jumbled and reconfigured, we actually learn one old nationality--Faye was from Singapore. Though, of course, the statue itself, based on an image designed in the 60s, is itself a reconfiguration, combining a lion's head with a fish's body, a configuration that doesn't seem like it could possibly be conducive to an animal's survival. And yet, like all the other scrambled signs, the statue has survived. 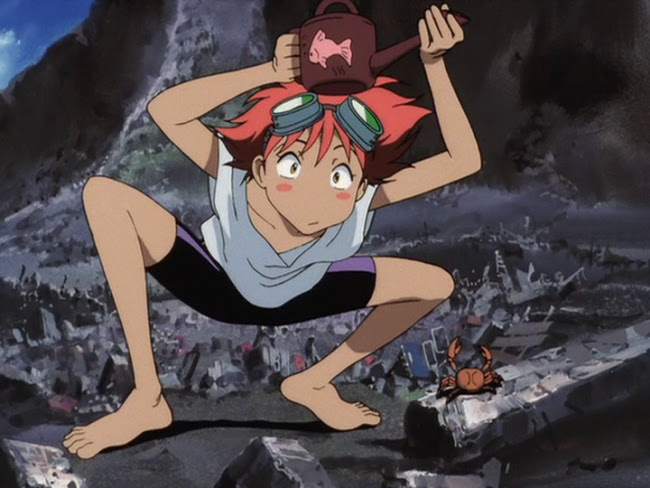 This is Edward's final episode. She was introduced late, Session Nine, and leaves early, in the third to last episode. It makes sense--beginnings and endings have too much intrinsic meaning for Edward. This episode proves, more than any other, just how much Edward destabilises symbols, even as we learn that she was partly raised by a figure who assigns very literal meaning to symbols, a Catholic nun. 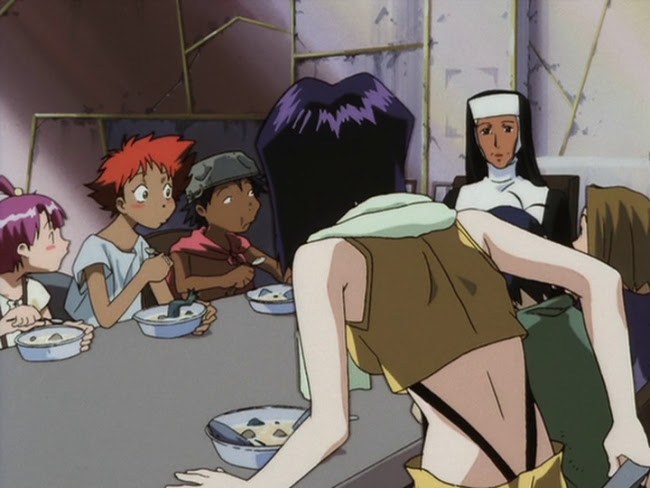 Not that there's any mention of transubstantiation. But it's not unlike the subtle bond between Edward and Jet--as the post-modern character, Edward, needs the old or traditional to react to and subvert in order to have any semblance of meaning herself. In the crater where the nun lives, Faye meets several other kids rather like Edward. There's a girl who collects toenails for no particular reason and a boy holds up a mangled toy robot for Faye and just says, "Kore, kore, kore!"--"This, this, this!" 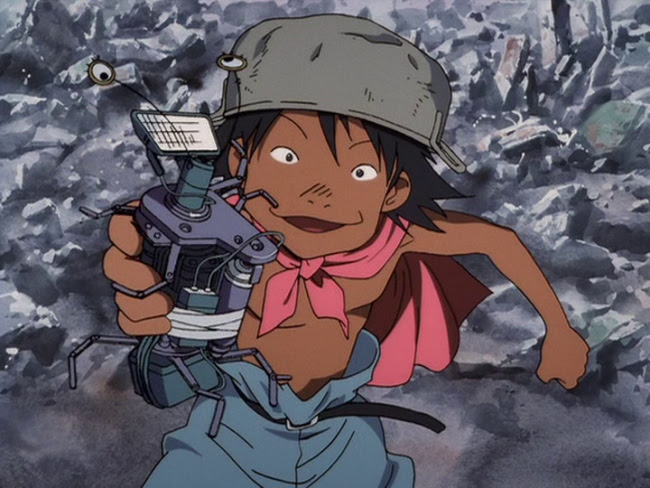 We also meet a man who's apparently Edward's father, his name another signifier jumble, Appledelhi Siniz Hesap Lutfen (Kenji Utsumi). He's engaged in an utterly pointless occupation, traversing the landscape in an attempt to manually map the surface of the Earth which constantly changes due to falling meteors. Naturally, even though he says this is vital for the future of the Earth, he's focused on a project that's all reaction and builds nothing permanent or lasting. Spike (Koichi Yamadera) and Jet (Unsho Ishizuka) try to capture him, mistakenly believing there's a massive bounty on his head, but he's not just a match in a fight for master martial artist Spike, he barely seems to acknowledge Spike is attacking him. 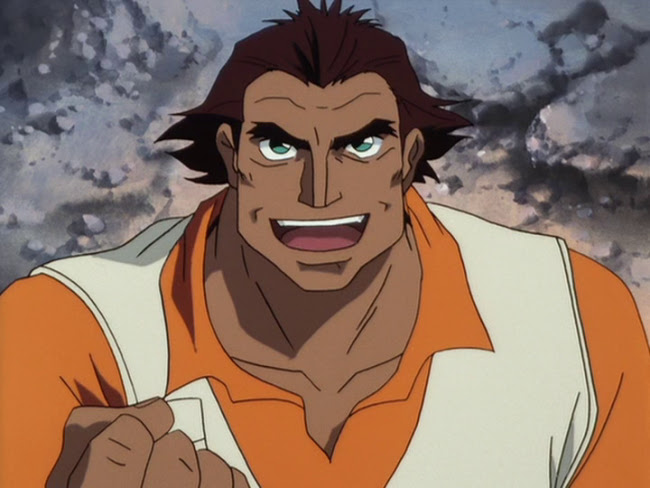 Of course nothing Spike or anyone could do, particularly anything based on a discipline mastered over time, could have any meaning for Appledelhi. He has an assistant whose name he constantly gets wrong ("Macintosh!" "Macintyre!" "Mackey Mackey!" "Macintyre!!") and when he sees Edward he calls her "Francois" and can't remember if she's a boy or a girl. 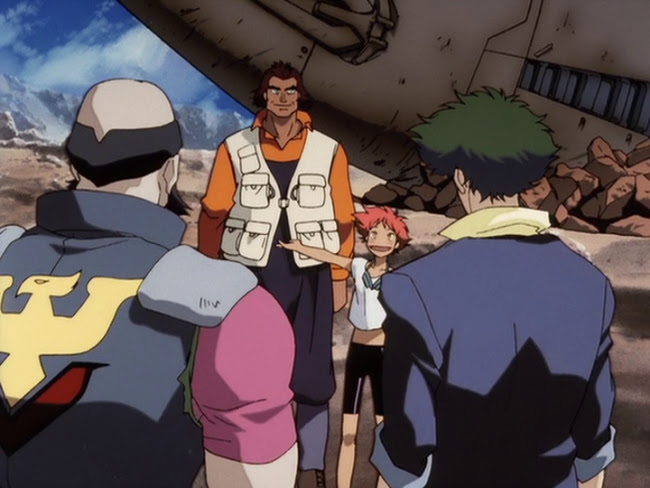 Edward calls him "Chichi" or "Chichi-hito". "Chichi" does mean "father" but, as my Japanese teacher explained it, it's not what you would normally call your father. Typically, one calls one's own father "Otosan", "Chichi" is a more formal word one uses when talking to someone else about one's own father. So it's bizarre that Edward addresses her father with this word and suggests the emotional disconnect. When Ed leaves at the end of the episode, it seems to be a much more difficult decision for Ein, who follows Ed. Ed doesn't seem like she's leaving for any reason other than that Faye told her to. 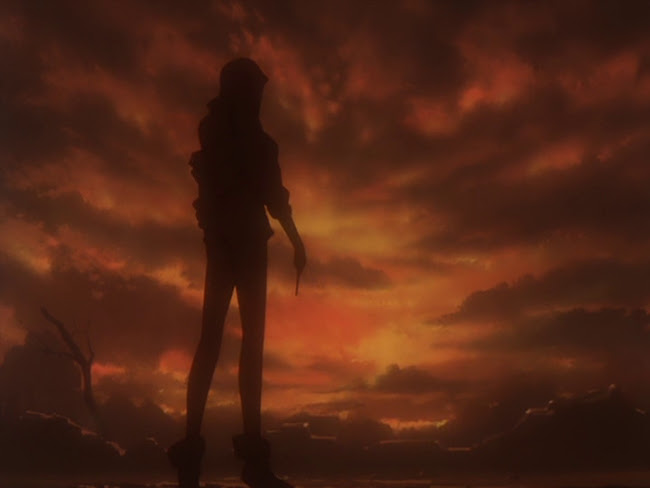 For Faye, the idea of finding one's home and family has become a desperate goal. Incredibly, when she finds the Merlion, she does run into someone she knew, a classmate who's an old woman now, but of course Faye doesn't remember her. The episode ends with a powerful juxtaposition of images, the sad image of Faye drawing a rectangle in the dirt in a ruined building, where she imagines her bed was, and the strange image of Spike and Jet cramming hard boiled eggs into their mouths. 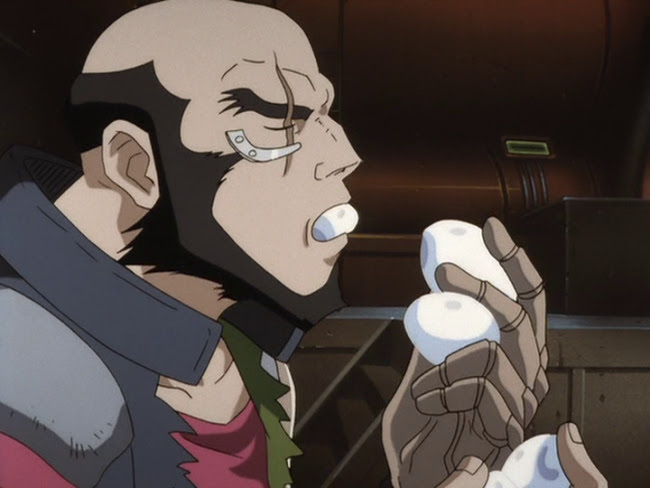 What are they doing? The eggs were a gift from Appledelhi who seems to survive only on eggs. I think the eggs symbolise youth and energy. The post-modern essence of Appledelhi and Edward is like youth--because the young don't have past experiences, they can only react to the manifestations of experience from others. Having a past is both a strength and a vulnerability. Spike and Jet are eating all those eggs in a vain attempt to capture some of that strength of youth to stave off the pain of loss, loss being something that can only be felt by people who have a past.